Cemetery Tours: Monuments to Die For

Rita Braver walks us through one New York tourist attraction that's truly at the end of the line:

We must disclose that rumors persist that this place is STILL HAUNTED. And among the spirits here is that of Washington Irving, the man who made the place famous by writing the "Legend of Sleepy Hollow."

We joined some brave souls who dared to venture into the spooky world of CEMETERY TOURISM!

If there's a chief Tombstone Tourist, it has to be photographer Doug Keister, who's visited hundreds of cemeteries, and published four books. He says it's a great way to see how the rich and famous end up . . . folks like steel manufacturer Andrew Carnegie. One of the wealthiest men in America ended up with a very simple monument.

Even simpler, according to the cemetery's historian Jim Logan, is the virtually unmarked gravesite of Darling Leo, a Cocker Spaniel interred in 1892 by a wealthy tobacco heiress who visited every day: "She would hire local schoolchildren to accompany her, and she paid them a sliding scale; the more tears they shed, the higher the wages," Logan laughed.

Turns out, you can learn a lot about human nature by visiting a cemetery. No surprise that hotel magnate Leona Helmsley, notorious for her personal extravagance, would shell out millions for a tomb for herself, her beloved husband Harry, and her even more beloved Maltese, Trouble.

But guess what? "The Queen of Mean," as she was known, FIRST built a mausoleum at Woodlawn Cemetery in the Bronx, now owned by others. Historian Susan Olsen says Leona was dead-set on moving, because she claimed her view here had been spoiled. She even brought a lawsuit against the cemetery.

Of course, going out in style is old hat. At Woodlawn, this replica of Leonardo Da Vinci's tomb, constructed at the turn of the 20th century, houses Oliver Belmont (of Belmont raceway) and his wife, Alva Vanderbilt Belmont.
"What was the reason they wanted to duplicate Da Vinci's tomb?" Braver asked.
"Just because they could," said Keister. 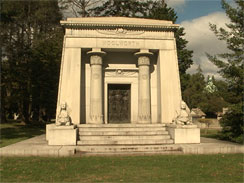 And in a place where you can see the tombs of everyone from Miles Davis to F.W. Woolworth, and architecture styles from classic Egyptian to Gothic, complete with gargoyles, our favorite may just be this one, that Keister calls, "What Were They Thinking?" architecture.

Eccentric patent medicine maker Clark Dunlop and his wife Eliza loved PARROTS, and not just on stained glass: Oh no, a parrot skeleton!

And that's the great thing about a cemetery. It might not be "Night of the Living Dead," but you'll never be bored stiff.