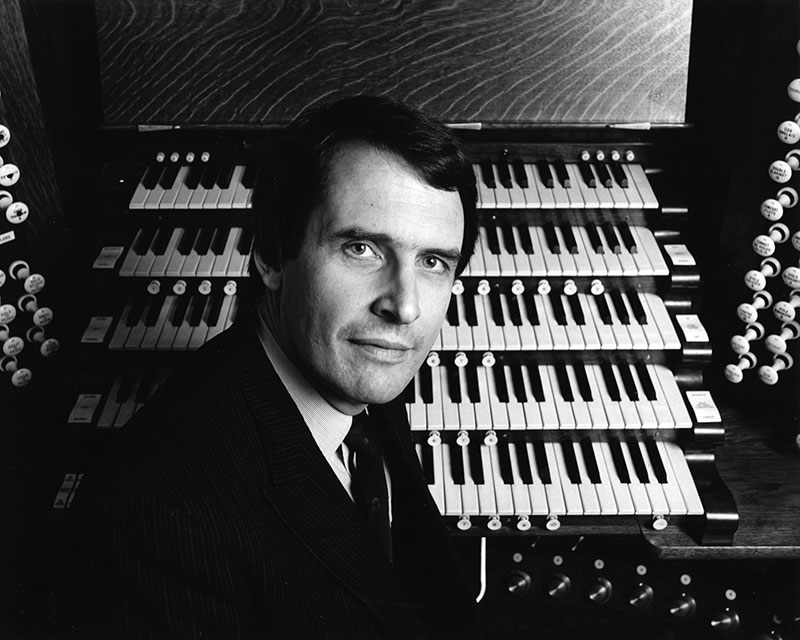 Known equally as a superb organist and an inspirational choir master, Simon Preston has died at the age 83. In this Icons article from December 2016, Marc Rochester celebrates an inspirational musician.

It is a warm September evening in 1966. A tubby 12-year-old boy sits in a capacity audience at London’s Royal Albert Hall eagerly awaiting the start of a concert in aid of the Royal College of Organists centenary appeal. He has been learning the organ for two years and believes himself to be well on the path to Organ Greatness. He is keen to see his organ heroes (John Dykes Bower, John Birch, David Willcocks, Francis Jackson) as well as new stars such as Gillian Weir, Martin Neary and a golden-haired lad called Andrew Davis whose fame was to be made beyond the organ stool. But our tubby 12-year-old’s greatest excitement is the prospect of witnessing the latest Organ Sensation, Simon Preston.

There is a shiver of anticipation as Preston makes his way to the RAH organ console. A quick bow to the crowd, and he has barely swung his long legs over the stool before launching into one of the most outrageous displays of pedal virtuosity in the entire repertoire, Bossi’s Etude symphonique. For several breathless minutes the whole audience sits spellbound. Preston’s legs bounce over the pedals as if made of rubber while his feet maintain pinpoint accuracy. As the music reaches its triumphant conclusion the packed Albert Hall audience lets out a roar the like of which London last heard two months previously when England had scored the winning goal at the World Cup final.

I was that tubby 12-year-old, and 50 years on I vividly recall the shock and awe of that moment. It was when realisation dawned that Organ Greatness involved more than I could ever hope to achieve. From that day to this, Simon Preston has been for me a hero.

Preston had first attracted attention in 1958 when – as organ scholar at King’s College, Cambridge, in the early days of the remarkable Willcocks era – he accompanied the iconic Festival of Nine Lessons and Carols. Indeed, what appears to be his first commercial recording is an LP (on the London label) of some of the carols from that 1958 King’s service. He made his first solo recording (Franck and Messiaen) for Argo a couple of years later, apparently recorded at just one week’s notice.

At Christ Church Cathedral, Oxford, Preston tirelessly sought to transform the choir, and several key recordings from this time testify to his remarkable achievements there. He went on to do the same thing at Westminster Abbey, but his relationship with the English cathedral system was always stormy, and his single-minded pursuit of excellence along with his determination to look beyond the confines of the usual Anglican repertoire ruffled feathers. As Christopher Herrick, who was sub-organist at the time, recalls: ‘Working with Simon Preston at Westminster Abbey for about four years was for me a splendid roller coaster. He was in a hurry to mould the abbey choir into the shape he required – repertoire expanded exponentially and standards were demanded rather than coaxed. It was an exciting time to be accompanying a choir on the move upwards. Although he was well known for his volatile moods, he would graciously show due appreciation when he was genuinely satisfied.’ In 1987 things reached a point which saw Preston leave Westminster, and the English cathedral system, for good.

English cathedral music’s loss was the world’s gain. He went on to stride the globe as an Organ Colossus, popping up in the most unlikely places, wowing audiences in the Americas, Australasia, Asia, Africa and the length and breadth of Europe with his inimitable charm, enthusiasm and steely musical intensity. To an amazing calendar of live performances he added an astonishing discography that amounts to well over 100 recordings, making him possibly the most recorded organist of all time.

Those recordings go way beyond the usual repertoire of solo organists. There are the classic concerto recordings, the matchless discs he made as conductor, and a surprising number on which his name appears in the credits as composer. His versatility is most famously demonstrated in the soundtrack to the 1984 movie Amadeus, where he features as performer, conductor and composer.

It seems appropriate to leave the last word on an icon for organists, organ lovers and record collectors the world over to another of today’s most respected organists, Wayne Marshall: ‘I have long admired Simon Preston’s amazing musicianship and talent. I will always remember an epic choral evensong broadcast that took place while he was organist at Christ Church Cathedral, Oxford, as well as his phenomenal recordings of the Poulenc motets and his recording of Messiaen’s L’Ascension while he was still organ scholar at King’s! A truly great man.’