Atlanta to remove ‘Lion of the Confederacy’ statue from Oakland Cemetery 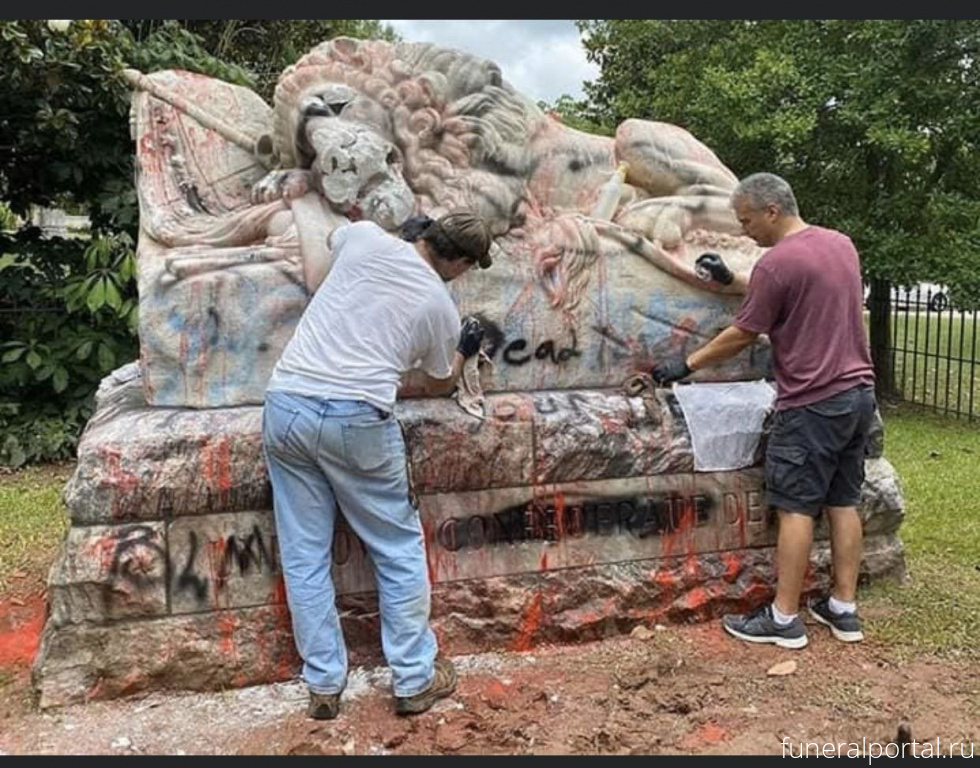 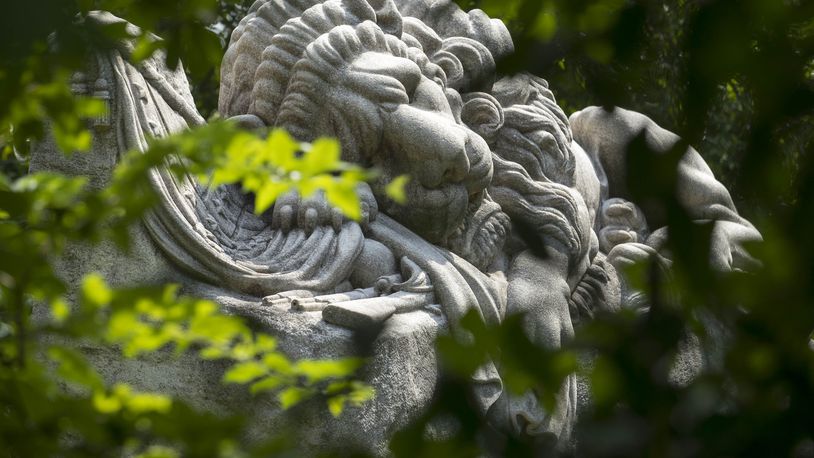 The city of Atlanta is set to remove a 127-year-old Confederate monument from Oakland Cemetery after it has repeatedly attracted vandals wielding sledgehammers and spray paint cans.

The City Council passed a resolution Monday evening declaring that the city should remove the “Lion of the Confederacy” monument and place it in temporary storage. The removal could happen as soon as this week, according to a member of City Council.

In recent years the statue has been defaced with graffiti, red latex and hit with objects like a pickaxe and sledgehammer. 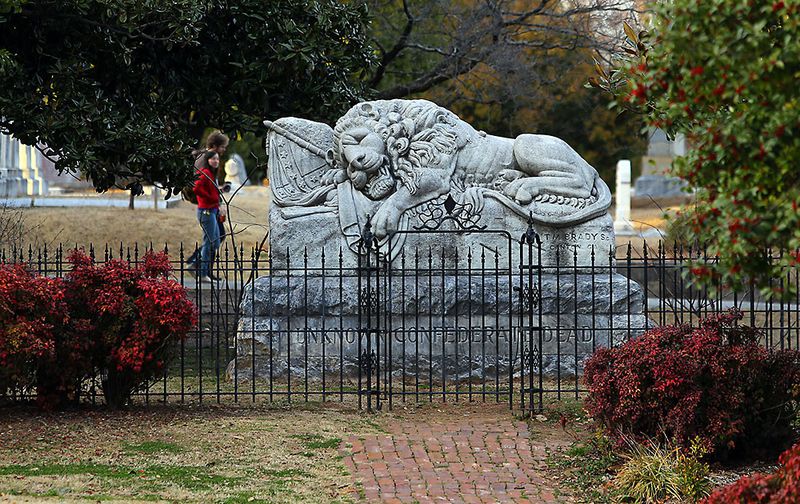 The statue was built by T.M. Brady and dedicated on Confederate Memorial Day in 1894 to honor the 3,000 unknown Confederate dead resting in Oakland Cemetery. The statue depicts a wounded or dead lion with its right paw resting on a cannonball partially concealed by Confederate flag.

The lion’s removal follows years of discussion among city leaders about how to address contentious Confederate iconography in Atlanta. In 2017, then-mayor Kasim Reed signed off on a 40-page report written by an 11-member panel that included recommendations related to Confederate symbols in the city.

Among the recommendations was the renaming of Confederate Avenue in the Grant Park and Ormewood Park neighborhoods to United Avenue, and attaching contextual markers to monuments like the Lion of the Confederacy and a 65-foot-tall Confederate obelisk also located inside Oakland Cemetery.

What sets both objects apart from Confederate monuments that sit in front of courthouses, state capitols or on city streets is that they are not “in your face,” but are part of the statuary of the cemetery, said Sheffield Hale, president and CEO of the Atlanta History Center.

Carved from Georgia marble, the lion is modeled after the Lion of Lucerne in Lucerne, Switzerland — an 1821 sculpture memorializing the Swiss guards massacred during the French revolution. The 30-foot-long Swiss sculpture is carved into the face of a low cliff, and is considerably larger than the Oakland version.

Atlanta City Council member Carla Smith, a sponsor of the legislation to remove the lion, led the panel established by Reed and was a major force behind the contextual markers.

While the committee never recommended the removal of the lion, vandals have left the city little choice but to move it to an undisclosed location, Smith said. 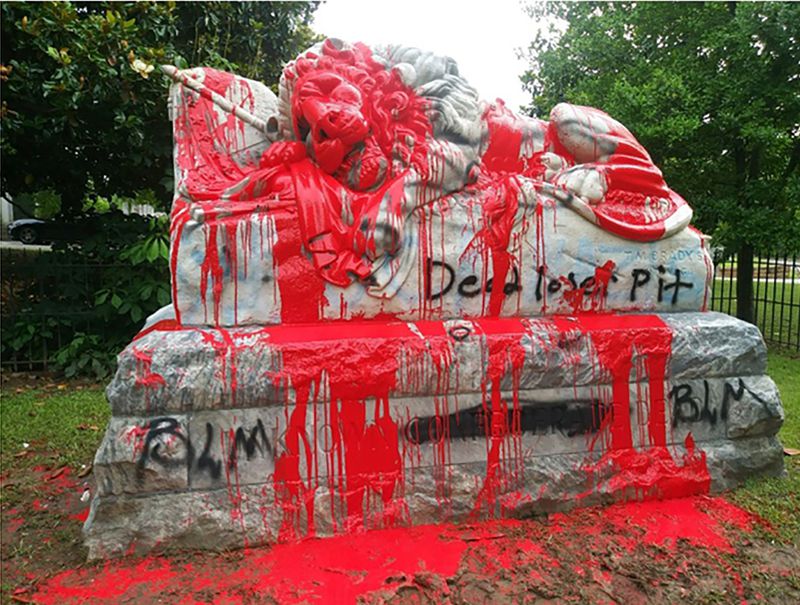 “They’ve smashed the face, the nose is completely missing and the cost of trying restore it is becoming too much,” Smith said.

“There’s been this constant vandalism and constant drain on city resources trying to protect and restore it,” said Councilwoman Natalyn Archibong, whose district includes Oakland Cemetery.

Richard Harker, executive director of the Historic Oakland Foundation, said that since October 2019, the marker had been vandalized at least eight times and that the interpretive signage below the statue, including the contextual marker, had been defaced repeatedly, sometimes in broad daylight. City employees have spent 150 hours rehabbing the statue after instances of vandalism.

Harker said six permanent security cameras had recently been installed in the park, including a couple aimed directly at the lion. Extra security guards had been hired in the last several months to deter vandals. 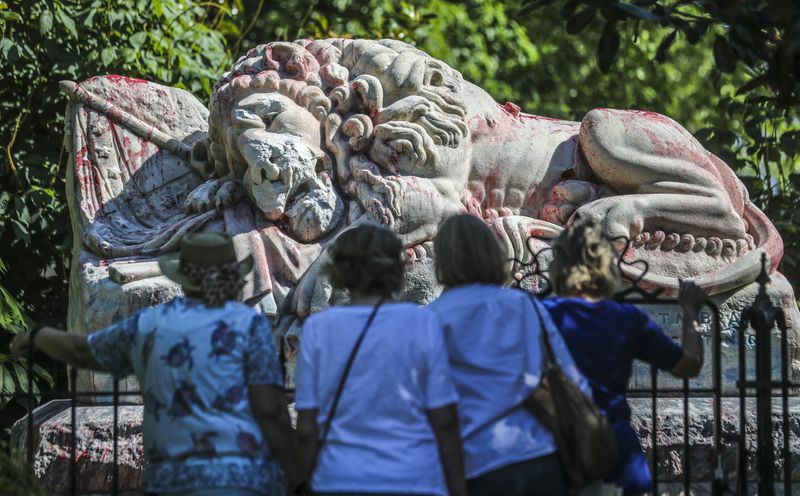 “The city’s history is good, bad, ugly and beautiful, and the city has to wrestle with all those legacies so we can move forward,” Harker said. “This is another example of the city, in a sad, unfortunate way, of doing so.”

The City Council approved a $33,000 contract with Superior Rigging and Erecting Co. to remove the lion statue. The city has not said where it will be located long-term.

The Confederate statue is listed by the Smithsonian as a historically significant piece of funerary art, Hale said, but removing it is a matter of public safety as well as preservation.

Hale also mentioned that the tension associated with the sculpture could lead to violence “adjacent” to the statue.

In the years since the city’s report on Confederate iconography came out, local governments around the state and nation have taken steps to remove monuments that glorify the Confederacy amid widespread protests against racism. The Georgia state law that makes it difficult for local governments to relocate or remove Confederate monuments was also updated in 2019 to include language that allows for “appropriate measures for the preservation, protection and interpretation” of monuments.

The Confederate obelisk in downtown Decatur came down last June. A Confederate monument built in 1993 in Lawrenceville’s downtown square was removed earlier this year.

The Removal of the Lion of Atlanta from Oakland Cemetery
https://oaklandcemetery.com/the-removal-of-the-lion-of-atlanta-from-oakland-cemetery/