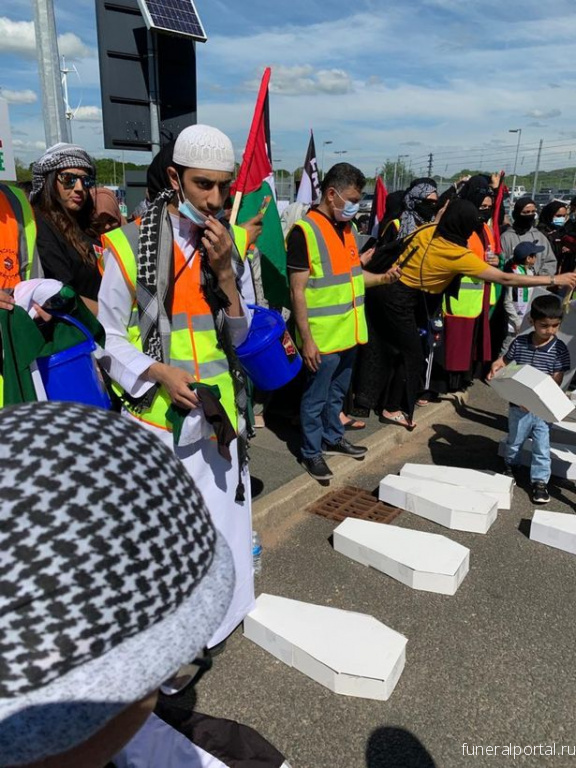 
BAE Systems is one of the major partners in the creation of F-35 fighter jets, which the Israeli military recently confirmed are part of the aircraft they use in the bombing of Gaza

The protest at BAE Systems' Samlesbury base of operations was described by organisers as a funeral procession to remember more than 60 children recently killed in the ongoing conflict between Israel and Gaza.

Setting up outside company gates, pictures of deceased children and small coffins were placed on the floor.

The event last Friday (June 4) was organised by the Lancashire Peace Forum (LPF) and was the second to date following a protest in May with an underlying mantra for the company to 'stop arming Israel'.

Event organisers said up to 2,000 people had been present; something BAE says was actually closer to 200. Lancashire Constabulary confirmed there was up to 300 at the protest.

It comes after links between BAE Systems and Israel were recently made apparent, with the Israeli military confirming F-35 warplanes have been among military aircraft being used in bombing Gaza.

BAE is one of two “principle industrial partners” on the F-35 programme, with GE Aviation, Martin-Baker, SELEX, Cobham, Ultra Electronics, UTC Actuation Systems and Rolls-Royce among other companies involved in manufacturing the jets, the Campaign Against Arms Trade (CAAT) notes.

Imam Yusuf Shabbir, one of the founding members of the LPF which aims to highlight oppression throughout the world, said those present wanted to "send a message" to BAE that "these are the children your arms are killing".

"This is not a Muslim or a Jewish thing," Imam Shabbir said.

"It's a humanitarian issue."

Company security was present during the protest but nothing untoward is believed to have happened, with BAE invited to speak by protesters, who said the company declined the offer.

Imam Shabbir said: "It was a very sad moment of reflection. It's very, very sad to be living in a country with this. I am from Blackburn; I live in close proximity to a firm building arms resulting in the death of innocent children as young as four and five.

"Every human life is precious. These children are innocent."

A BAE spokesperson told LancsLive the company 'fully respects' the right to peaceful protest. On the F-35 programme, they said company activities are "subject to compliance with international trade control requirements".

They said: "A group of protesters were present at one of our sites in Lancashire on May 25 and June 4.

"The protests passed peacefully and there was no impact on our operations.

"BAE Systems is a key partner to Lockheed Martin; the prime contractor on the global F-35 programme.

"Our activities are subject to compliance with international trade control requirements, including US and UK trade control regulations, and our own responsible business trading principles."

The LPF has founding members across Lancashire including Blackburn, Preston, Blackpool, Burnley and Chorley.

It has close links to the Friends of Al-Aqsa; a UK based non-profit making NGO concerned with defending the human rights of Palestinians and protecting the Al-Aqsa Sanctuary in Jerusalem.