Deceased Drummer Sits Behind a Drum Kit at his own funeral 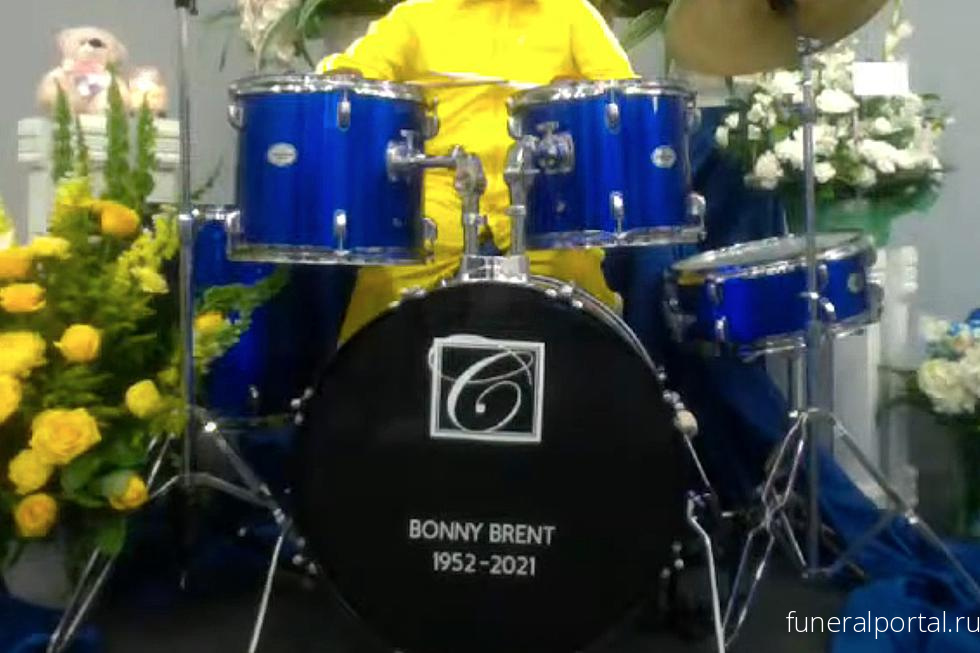 Editor's note: If you are uncomfortable with seeing images of death this post might not be for you. However, death is a natural part of life and there are many ways to celebrate someone's time on Earth. There are photos and videos in this post showing a posed dead body at a funeral celebrating Bonny Brent's life as a musician.

Brentnol McPherson (aka Guyanese drummer Bonny Brent) died earlier this year. To celebrate his life as a musician, family and friends gave him a legendary sendoff, posing his body behind a drum kit while music played at his funeral service.

The funeral was arranged by Covenant Funeral Homes in Toronto, Ontario, Canada. Dressed in a yellow track suit, Brent’s body was displayed behind a blue memorial drum kit with “Bonny Brent 1952-2021” on the kick drum. A wealth of flowers surrounded Brent, who even got to hold a pair of drum sticks one last time.

“Reunited with his dad the late greats Tom Charles, Pamela Maynard, Dennis Brown and the many artists gone before him,” Covenant Funeral Homes posted publicly on Facebook. “This was truly an honor! THANK YOU BONNY....WE SAID WE NEEDED TO TELL THE WORLD ABOUT JESUS..... WITHOUT HIM, This would still be in my dreams......I know you are happy!!!”

As documented in a separate video, Brent’s body can be seen in a traditional casket at some point during the funeral process:

Recently deceased individuals being posed in lifelike situations isn’t so uncommon. ABC News published a piece in 2014 documenting “extreme embalming” in New Orleans. The AV Club also interviewed a mortician in 2018, who went through the process on how to prop a dead body.

According to Brent's own Facebook page, he'd battled cancer shortly before his death. "I want to thank everyone for there out pouring of love n support for me to recover from cancer with the chemo treatment thanks very much," he wrote. "love n respect to all my God bless every one . peace .my wife n I thanks once again."

We’d like to offer our sincere condolences to the family and loved ones of Bonny Brent.

Deceased drummer sits behind own kit at his funeral
https://www.nme.com/news/music/deceased-drummer-sits-behind-own-kit-at-his-funeral-2931316