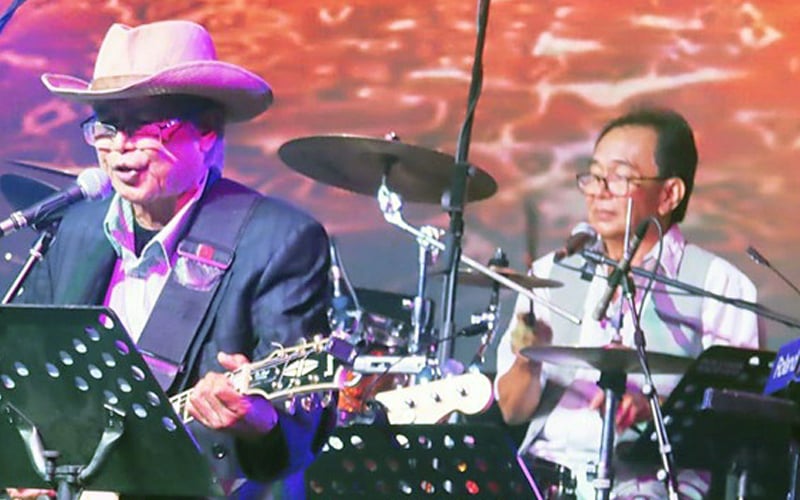 KUALA LUMPUR: Hassan Idris, lead guitarist and co-founding member of legendary local band, The Strollers, has died at the age of 73.

The shining face of Malaysia’s pioneer pop band, Hassan breathed his last at his home in Seri Menanti, Negeri Sembilan, this afternoon.

His younger brother and bandmate, drummer Hussein, said Hassan died at around noon. He had asked his wife for porridge in the morning but never got to eat it. The cause of death is not immediately known.

Hussein said his brother’s passing was unexpected as he seemed to be in good health.

Tributes are pouring in for Hassan, described as an exceptional guitarist who played chords from memory and played songs from all genres of music until his final days.

“He was an incredible talent and mentor who gave his bandmates such joy to play with him,” said Hussein. “He was a man of few words and over the years inspired many musicians who share my great respect for his works and professionalism.”

Hussein, 70, who is still the drummer of the band with a different line-up, said Hassan began as the rhythm guitarist when The Strollers was formed in 1965 and took over lead guitar after Amrin Abdul Madjid left to do business in Indonesia.

“It’s unbelievable how a musician who didn’t read notes and learned to play by ear soon became a great lead guitarist,” said Hussein. “He was so determined to excel in lead guitar that he used to practise non-stop into the wee hours of the morning.”

Hussein said every member of the group also worked out their own chords and drumbeats and played each number from memory.

Bassist Billy Chang who met Hassan in the 1960s said he was heartbroken over the passing of a “dear old buddy.” He said Hassan seemed hale and hearty during their chats in their WhatsApp group, and had been posting his acoustic versions of various songs.

Chang, who is still a member of The Strollers, said Hassan’s recording of the Eric Clapton song Tears in Heaven last year, during Covid-19 movement restrictions, resonates with his passing.

Omar Ariff, the biographer of The Strollers, said he had developed a close relationship with Hassan while writing the book, ‘“The Strollers: Malaysian Pop Legends”, which was published last year.

“Hassan was very passionate about music and his craft as a musician. His life had always been about music. Watching him practise and perform with the new Strollers on a number of occasions last year, I saw a true professional and a perfectionist in action.

“During the launch of ‘The Musicians for Musicians’ in Petaling Jaya and the ‘Band Nite’ at Kuala Lumpur Convention Centre last year, Hassan showed his prowess as a lead guitarist.

“One could be forgiven for forgetting that the guitarist dazzling on stage was a 73 year-old-man, not a 20-something Hassan. Such was his energetic display that Hassan chose to make music a lifetime career and become a legend along with other members of The Strollers,” said Omar.

Hassan formed his first band in the early 1960s while still a schoolboy in Kampung Baru. The band, Sputnik, was named after the Soviet satellite which was the first man-made object to orbit Earth.

Sputnik was among several bands caught up in the pop yeh-yeh genre inspired by Cliff Richard and The Shadows. The band played at Merdeka Stadium as part of a campaign to raise funds for the construction of the National Monument (Tugu Negara) on Nov 16, 1961.

From Cochrane Road School sprang The Strangers whose lead singer Agus Salim had a penchant for Cliff Richard songs, while The Blue Dominoes were rocking Klang with mainstays, guitarists Michael Magness and Peter Ghouse.

The Ghosts, made up of school friends in Petaling Jaya, included an Indonesian migrant Amrin Abdul Madjid, and were popular at house parties and social functions.

A curious kid, Billy Chang Chee Lam, whose brother Danny was with The Ghosts, tagged along.

The drummer of another Kuala Lumpur band, Sinaran, was Ramli Yaakob while Petaling Jaya’s, The Typhoons, had Hussein Idris as their drummer.

As fate would have it, Amrin, Chang, Hassan and Ramli came together and formed an instrumental band called The Strollers in 1965. Hussein, Thaddeus, D’Oliverio and Magness were to join the band later.

Their first manager was 19-year-old Tan Soon Loke, who was better known as Jap Tan. Because of his short stature, his friends nicknamed him “yat pun chai” which in Cantonese means “Japanese boy”.

The schoolboy tearaways became the voice of their generation and eventually earned legendary status.

The legacy of The Strollers won recognition in 2016 as the “First Malaysian Pop Band” by the Malaysia Book of Records.

They were the first and only Malaysian band to sign with an international recording label to release English songs. They released nine singles, one EP, one album and 33 songs, of which 17 were original compositions.

The band’s giant single, “Do What You Gotta Do” topped the Malaysian charts for eight weeks while “Mid-day Sun” with Hassan on lead vocals was another smash hit.

The boys were the opening act for international groups the likes of The Hollies, Tremeloes and Christie and they travelled widely with overseas gigs that included Jakarta and Kyoto.

As Omar wrote in the biography of The Strollers: “Their legacy endures to this day albeit largely forgotten by Malaysia, save in the collective memories, hearts and minds of their diehard fans.”

We should not forget the feats of The Strollers and always cherish icons like Hassan who have filled our hearts with good music and pure joy. 55 years of ‘Andrei Rublev’: Tarkovsky’s powerful thesis on the death of spirituality ‘The corporates hate me’: the rise of the cut-price funeral firm