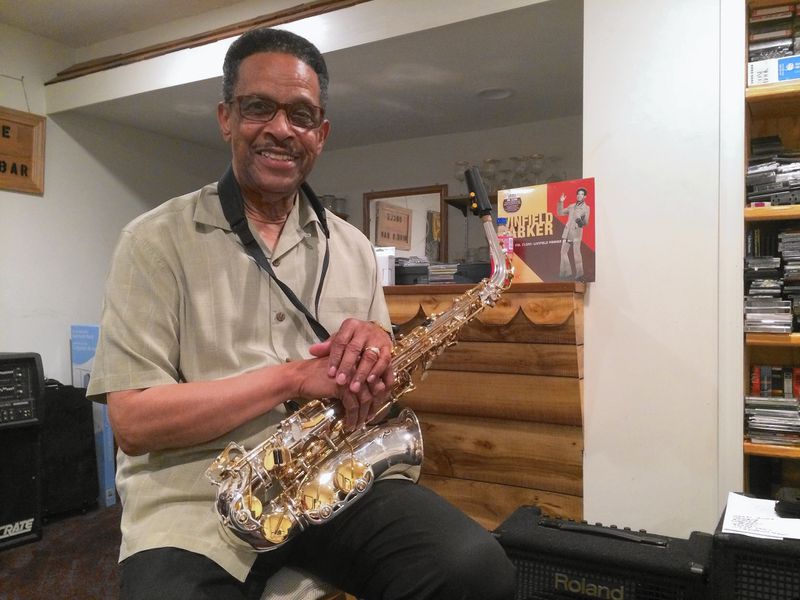 
Winfield Parker, a rhythm and blues vocalist and saxophonist who accompanied Little Richard, Otis Redding and Ike and Tina Turner, died Jan. 18 at Gilchrist Center in Howard County. He was 78 and lived in Sykesville.

“Winfield was a solid guy,” said a friend, Milton A. Dugger Jr. “He really cared about the job he was going to do when he went on stage.”

Born on a farm in Cooksville in central Howard County, he was raised by his grandparents. He attended Harriet Tubman High School and played guitar as a young man. When an uncle gave him a saxophone, he immediately took up the instrument.

Mr. Parker recalled that while a student at Harriet Tubman High School in Clarksville in Howard County, he and friends, including a cousin, started their own band, the Veejays.

“But that wasn’t where the attention, or the money, was. And he wanted both,” said a Baltimore Sun 2016 article.

Mr. Parker recalled the pay was better for a singer.

“The side man didn’t make no money, the front man was getting all the glory,” he said. “Everybody, even the girls, they were just after the front man,” Mr. Parker said. “And the money jumped from $25 and $30 a night to make $150 a night? Oh yeah, I figured I got to get singing.”

A biography in the 2012 book, Baltimore Sounds, said Mr. Parker went on to join a Washington, D.C. band, Sammy Fitzhugh and the Morocco’s and recorded two singles. He then joined Little Richard’s backup band as a sax player and toured widely.

He was the youngest member of Little Richard’s ensemble and was known as Little Winnie. They toured the country and Europe. When they played in Sweden, he called his mother and said, “Send me money. I want to come home.”

“Winfield was cheerful and vivacious,” said Baltimore musician Paul Johns. “He was outgoing to people. While small in stature he had that outgoing personality. He was all about the business and was ready to go on. On a gig, he was a leader, a star and a singer.”

Mr. Parker then formed his own group, the Imperial Thrillers, and appeared as lead vocalist and saxophonist.

He worked with Ru-Jac record owner Rufus Mitchell and cut sides at a 400 block of Laurens Street recording studio. He also performed at the Lyric Theater, the Lucky Number, Club Casino, the Madison Club, Sphinx Club and the Red Foxx Lounge, among other venues.

In 1965 he was appearing at a club called Moe’s on Greene Street near the Lexington Market. In an ad that said, “Interracial- everybody welcome’ - he was billed as Little Winfield Parker.

He also performed in summers at Carr’s Beach near Annapolis in the dance pavilion that attracted numerous rhythm and blues artists. There he met masters of ceremonies Hoppy Adams, Hot Rod and Fat Daddy, who were then well-known as local radio hosts.

While performing at Carr’s Beach, he met Otis Redding.

“Redding liked what he heard, so much that he took much of the band out on the road with him,” said Mr. Parker. “I gave him half of my band.”

When he played the Royal Theater on Pennsylvania Avenue in West Baltimore, he said, “That was the big time. When you got to the Royal, you knew you had made it.”

He also opened for acts at the old Baltimore Civic Center. He played for the Temptations, the Four Tops and Jackie “Moms” Mabley at their Baltimore appearances.

In 1971 he scored his largest hit single hit, “SOS, Stop Her on Sight” that made the best seller charts in the pops and rhythm and blues categories.

The Sun’s 2016 article said, “...And nothing has stopped him - not changing musical styles, not a run-in with the law, not a bout with [lung] cancer a few years back.” The article said he had a “drug arrest in Montgomery County and a stint in prison.”

His biography said that after a brief retirement, he returned in 1985 and by this time had changed musical direction. He appeared with a Gospel group, Praise. He sang at churches and other religious gatherings.

The 2016 article said, “His story reads like a road map of the past half-century of regional R&B. His voice remains strong, his reputation among R&B aficionados [is] stellar,” the article said.

“Late in life, he was reintroduced to a younger generation,” said WTMD’s Baltimore music and engagement manager Sam Sessa, a former Baltimore Sun reporter. “Winfield played his first show after recovering from lung cancer at WTMD in 2014. He came out in a white suit and had the audience eating out of his hand in minutes. At the end of his set, he walked out into the audience and disappeared into the arms of his fans. I want to remember him that way.” January has seen more deaths of black music stalwarts. US sources are reporting the passing of soul man and sax player WINFIELD PARKER. There are few details, save that Parker, based in Baltimore, was 78 and died of Covid complications. https://www.soulandjazzandfunk.com/news/passings-8/