The Week In Russia: The Coronavirus And Kremlin Control https://www.rferl.org/a/week-in-russia-coronavirus-kremlin-control-putin/30561478.html


Moscow (CNN)The limbs of a lifeless body hang off a stretcher in a hospital ward as coronavirus patients battle for their lives just a few feet away. An elderly woman gasps for breath, her desperate panting a grim soundtrack to one of many disturbing cell-phone videos emerging from hospitals across Russia."This is how our nights look: horrifying," says a male voice narrating the footage, given to CNN by a prominent opposition-linked Russian doctors' union, "Doctors' Alliance," which says it was recorded in mid-October by a hospital staff member in Ulyanovsk, a city around 500 miles east of Moscow.

"Two more down in our ward," he says, while filming a corpse. "This is how Covid-19 is killing everybody."

This grisly video is just one of several obtained by CNN that reveal appalling conditions inside overcrowded facilities. Some footage shows morgues with bodies, stripped naked, piled on top of each other on grimy floors, in scenes that look like war zones more than hospitals.

As Russia struggles to get the pandemic under control, the videos are one of several signs pointing to an actual death toll far higher than official figures suggest.

Russia says as of November 16 more than 33,000 people have died of Covid-19. But that number is disputed by critics who say the Kremlin is underreporting the numbers.

"I think the real figure is [around] 130,000 people," said Alexey Raksha, a former government statistician who has made his estimates based on official data on excess deaths -- the number of fatalities above what would normally be expected -- to assess the toll of the pandemic. 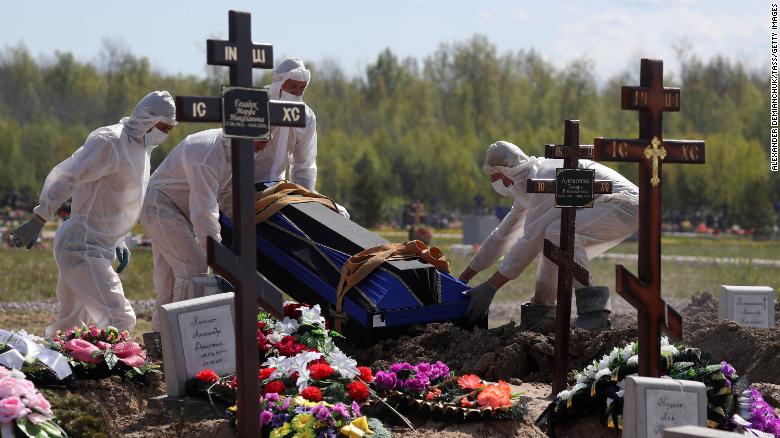 Workers wear protective equipment in Novoye Kolpinskoye Cemetery, Saint Petersburg, during a funeral in May.

Using data from local registries, Raksha estimates that Russia reached around 160,000-170,000 excess deaths from April to November. He attributes around 80% of these fatalities to Covid-19 -- an average number aggregated from similar statistics published by Western countries.

Between April and September 2020, Russia's official excess mortality figure was roughly 117,000 more deaths, compared to last year, according to Rosstat, the Russian statistics agency. The official Covid-19 death toll for that period is roughly 21,000 people.

There is no Rosstat data available yet for October and November, but judging by official tallies released by the country's coronavirus response center, the spread of the pandemic has accelerated rapidly.

Raksha says he quit Rosstat in July after being publicly vocal about the way the agency counts coronavirus-related deaths. He says that the discrepancy between the official figures and his calculations is due to the way that Russia classifies its Covid casualties.

Rosstat uses a four-tier classification system, he explains. According to the agency's website, they are: 1. the patient testing positive for Covid-19 before death; 2.when Covid-19 is presumed to be main cause of death but would need to be confirmed by autopsy or further research; 3. when the virus contributed to death in those with underlying conditions; 4. when Covid-19 is confirmed but not deemed a major factor in the death.

"Only the first tier of victim, when the patient has tested positive for coronavirus before dying, is recorded as a Covid-19 death," Raksha told CNN. According to Raksha, deaths in all three other tiers are left out of the official figures.

Neither the Russian health ministry, the public health watchdog Rospotrebnadzor, nor Rosstat have responded to CNN's requests for comment. 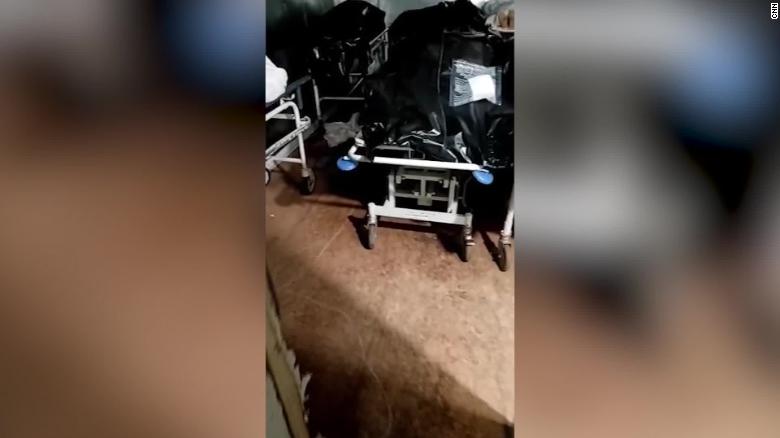 A scene from a video given to CNN showing an overcrowded morgue in Russia's Ulyanovsk region in October.

This counting method differs from World Health Organization guidelines, which states that all deaths related to Covid-19 should be counted unless there is "a clear alternative cause that cannot be related" to the disease.
As it battles the pandemic, however, Russia still knows how to put on a good show. In August, amid much fanfare, it became the first country to register a coronavirus vaccine, Sputnik V, even before crucial Phase 3 trials had started. That vaccine, which was met with skepticism by outside scientists, has not yet been widely administered.

CNN was also granted rare access to a 1,300-bed state-of-the-art temporary coronavirus hospital in Moscow, set up in what was a world championship ice-skating stadium, called the "Ice Palace." 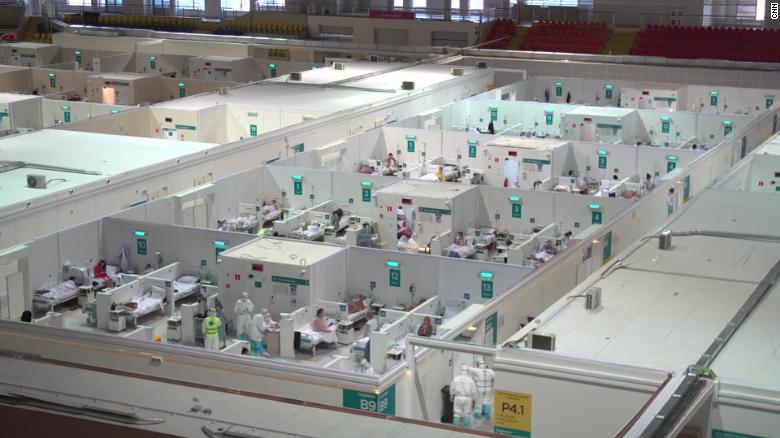 The Krylatskoye Ice Palace, which has been converted into a coronavirus field hospital in Moscow.

"The crisis is complicated but manageable," the chief doctor, Andrey Shkoda, told CNN as he gave us a tour. "We have all the necessary diagnostic equipment here, ultrasound, anesthesia and ventilators."

Looming above, a gigantic screen that usually broadcasts skating or ice-hockey scores to the crowd is now used to show movies to patients as they undergo treatment.

The chief doctor said the hospital is fully digital; every patient is assigned a bracelet with a QR code which links to all their healthcare records.

"This is standard care," he told CNN, across Moscow and beyond.

Yet this rosy picture of a country in full control of the pandemic, with a network of spacious medical facilities, seems increasingly at odds with the graphic footage emerging from hospitals, a deeper examination of the official statistics and the testimony of some medical workers.

Last month, the Russian government admitted a growing strain on its medical facilities, with Deputy Prime Minister Tatyana Golikova saying hospital beds in five of the worst affected regions were already at more than 95% capacity. 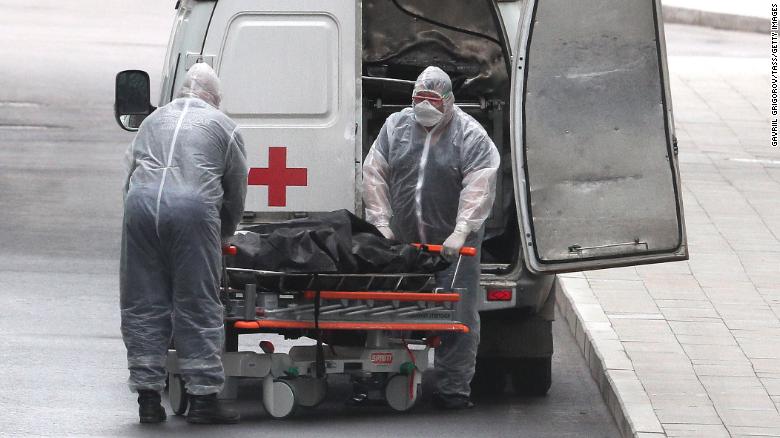 Staff with the body of a deceased patient at the Novomoskovsky medical center in Kommunarka, outside Moscow, in April.

One ambulance driver in the Saratov region of southwest Russia -- who spoke to CNN on condition of anonymity due to fear of repercussions at work -- said the situation in his hospital is "a mess."
"Doctors even refuse to admit elderly patients with breathing difficulties," he said. "They tell them there's no need to hospitalize them. But the real reason is there are not enough places on the ward."
And in another video given to CNN, filmed in an overloaded morgue, a male voice speaks over the gruesome images: "We could hardly find any place here. It's like a horror film."

Anna Chernova in Moscow contributed to this report.