What happened to the great American cemetery? During the Rural or Garden Movement and the Memorial Park Movement of cemetery planning in the late 19th and early 20th centuries, cemeteries across the nation were part of the common public landscape. They were placed in high regard among citizens and community leaders alike. They were featured on postcards, and promotional literature by civic boosters, and were among the rock stars of public spaces. The cemetery was often a reflection of the community’s wealth, values, culture, progress, and memories. "Sextons," or superintendents, were highly respected members of the community as custodians of the dearly departed.

If we shift our perceptions, cemeteries can become community destinations that are accessible, reflective, nurturing, and inspirational.

But then something changed. Corporatization of the death care industry, strapped budgets, a mobile society, a general disconnect between the cemetery and its community, and pop culture all changed perceptions of how we may think about cemeteries as public space throughout the 20th century. As the economics of death care change, however, some cemetery managers have found that by inviting the public in and creating multi-use cemeteries, they can find new support for their organizations and properties.

These progressive cemeteries are finding new and unique ways to bring the living and the dead together for more than a funeral. If we shift our perceptions, cemeteries can become community destinations that are accessible, reflective, nurturing, and inspirational. Of course, not everyone sees cemeteries in the same way. What may be an acceptable approach to one location may be taboo in another. Understanding what is out of bounds when mixing a cemetery's primary functions and broader public use is rule #1 for cemeteries seeking to reposition themselves as a community focal point once again.

The following six cemeteries offer some leading examples of how to strike this balance and to capitalize upon unique assets through tours, events, and functions. Accomplishing these changes means understanding the space, its connections, meanings, limitations, opportunities, and relationships to the community now. But by thinking beyond the fence, these cemeteries have redefined and reimagined their grounds and placed them back into the spotlight as one of their city’s premiere public spaces. 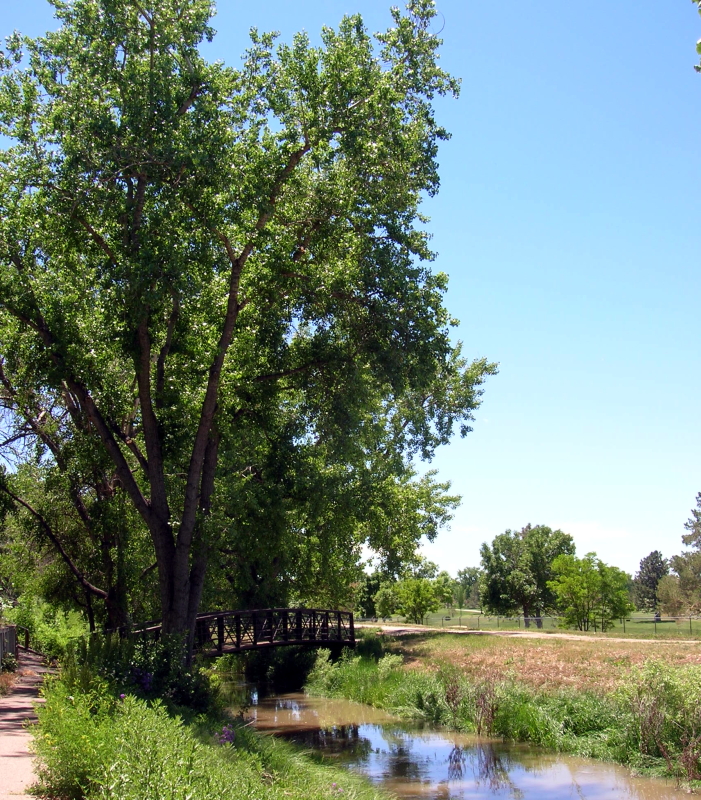 A nearby portion of the High Line Canal trail, which cuts through Fairmount Cemetery. | Photo by J. Pock (Wikimedia).

Established in 1890, Fairmount Cemetery is the Mile-High City’s second oldest cemetery. At the time, its 280 acres were hailed as the largest planned landscape west of the Mississippi, and from the beginning, these grounds beckoned visitors to gather and take part in passive recreation. Even today, the cemetery’s website, invites the public to jog, picnic, and bicycle the grounds. In doing so, the cemetery has become a hub for bicyclists, walkers, and runners who take advantage of the Cherry Creek Trail that skirts its border with the cemetery serving as an access point and staging area. A parking lot next to the cemetery’s community mausoleum provides safe and easy access for Denver residents and visitors to connect to the trail. The cemetery itself provides for the same sort of activities that can be done on the trail, too. With Fairmount serving as a trailhead, it repositions the cemetery as a community asset in the broader sense as a public space with multiple uses. This translates into other value for the cemetery itself, through volunteerism, community support, sales of lots, and fundraising because of the cemetery’s diversified use. 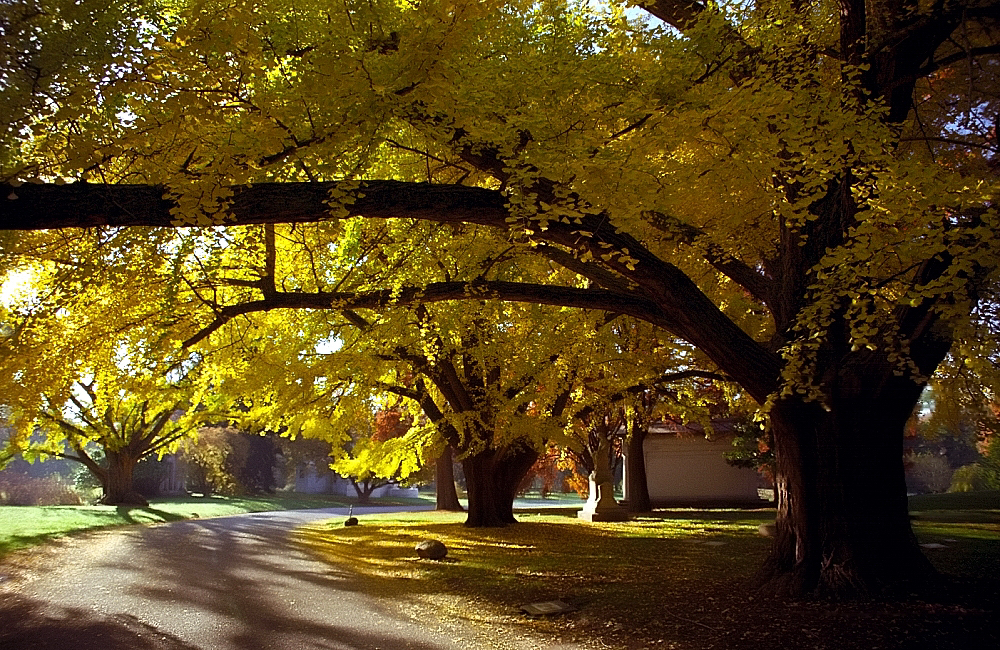 Organized by the Cincinnati Horticultural Society, Spring Grove Cemetery in Cincinnati, Ohio, officially opened its grounds in 1845. It encompasses over 733 acres with nearly two-thirds of that land maintained as a model horticultural masterpiece that has become one of Cincinnati’s top tourism attractions. In 1987, the cemetery changed its name to include “arboretum” to reflect its extensive horticultural holdings, which include a 10-acre wooded preserve, 44 miles of roadways, 10 lakes, and over 1,000 plant species tagged for research purposes.

As the city grew, it eventually surrounded Spring Grove, and by doing so, it has become even more of a public space destination that brings people together through its beauty. The Spring Grove Village neighborhood embraces being home to the cemetery, and touts it as part of the recreational amenities available to its residents. The horticultural expertise found at the cemetery has also reached beyond its fence to provide training and education to the successful community garden initiative located in Spring Grove Village. 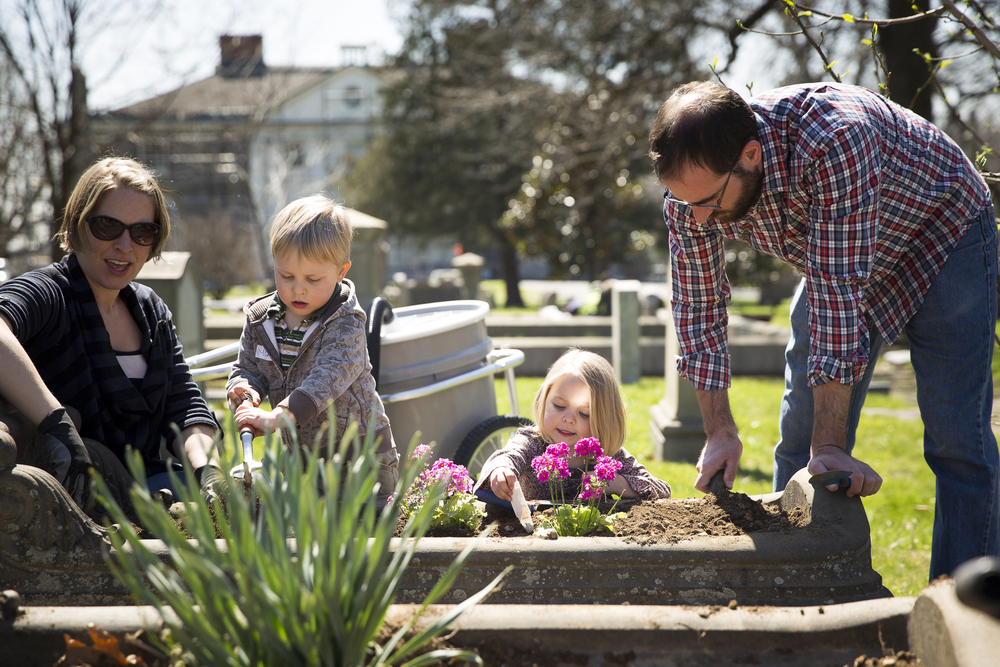 Founded in 1840 and encompassing 54 acres that once comprised the estate of William Hamilton, The Woodlands Cemetery in West Philadelphia takes community gardening a step further by inviting neighborhood residents to volunteer as Grave Gardeners. The 18th century Hamilton mansion serves as the focal point of this cemetery now surrounded by a thriving neighborhood known as University City. Grave Gardener volunteers get to use and enhance their gardening skills by adopting cradle style gravesites that were designed for the purpose of allowing plantings to be grown and tended by the dearly departed family and friends. As time went on, the cradle graves at the Woodlands no longer bloomed or contained plantings as family members moved on themselves. The Grave Gardener program restores the beauty and function of the cradle graves and enhances the grounds of the cemetery once again. The space also provides a gardening outlet for city residents who may not have the opportunity to practice their green thumb skills at home. 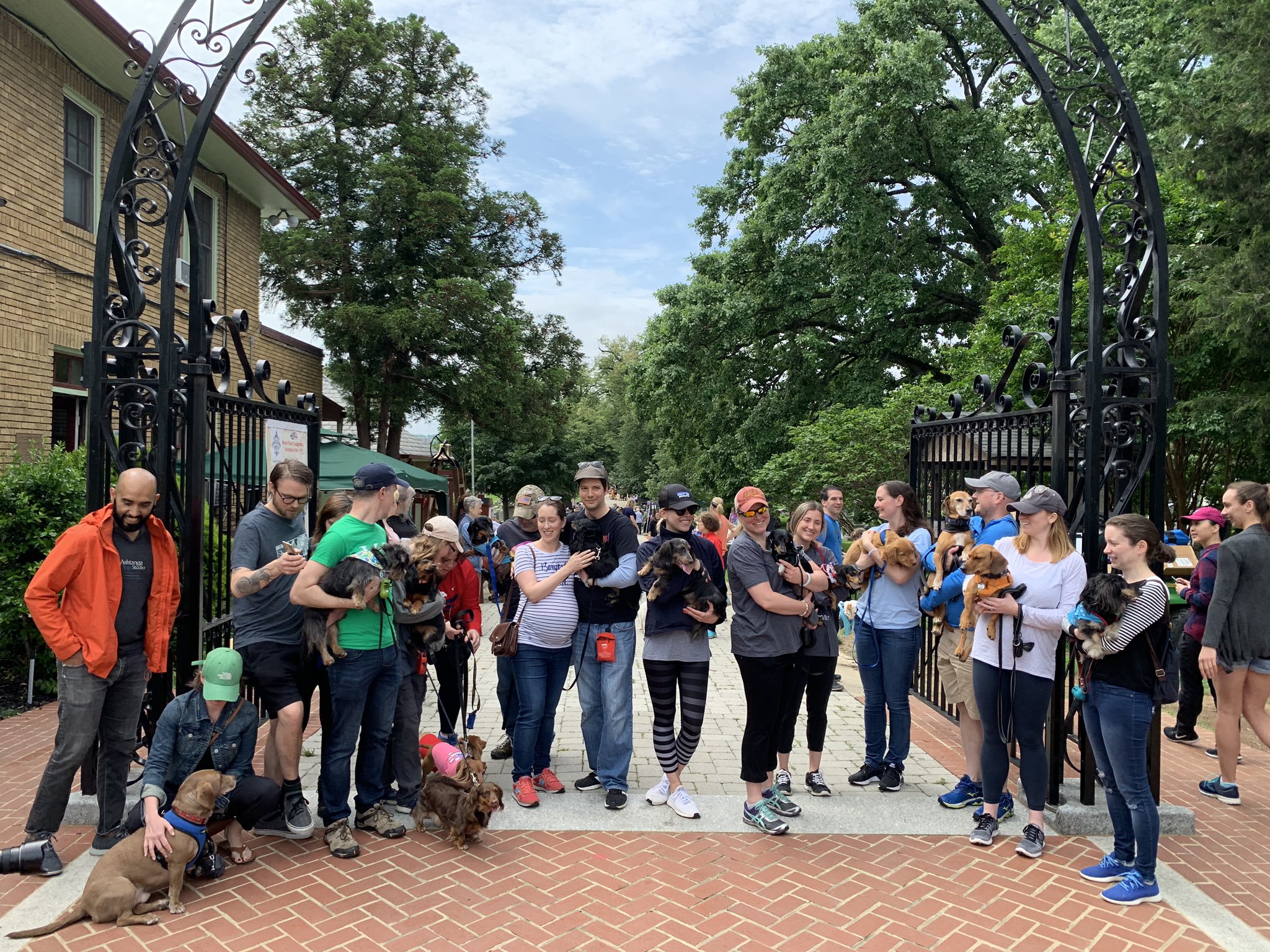 Dogs and their humans celebrate the Day of the Dog at Congressional Cemetery in Washington, DC. | Photo via @CongCemetery on Twitter.

Once known as the Washington Parish Burial Ground, Congressional Cemetery in the nation’s capital is going to the dogs. By welcoming in dog lovers and their furry friends to utilize the cemetery, they may raise some eyebrows and cause tails to wag, but the managers generate one-quarter of their income from the sale of memberships for off-leash privileges in a 35-acre fenced in area. In 2017, this merging of this 1812 cemetery and a dog park attracted so much attention that it had over 500 people on the waiting list. Of course, there are rules that apply, but the concept has resulted in increased volunteer efforts at the cemetery, more community awareness, an added security element through more "eyes on the street," and “Yappy Hour” events that have re-defined this cemetery as a unique public space. 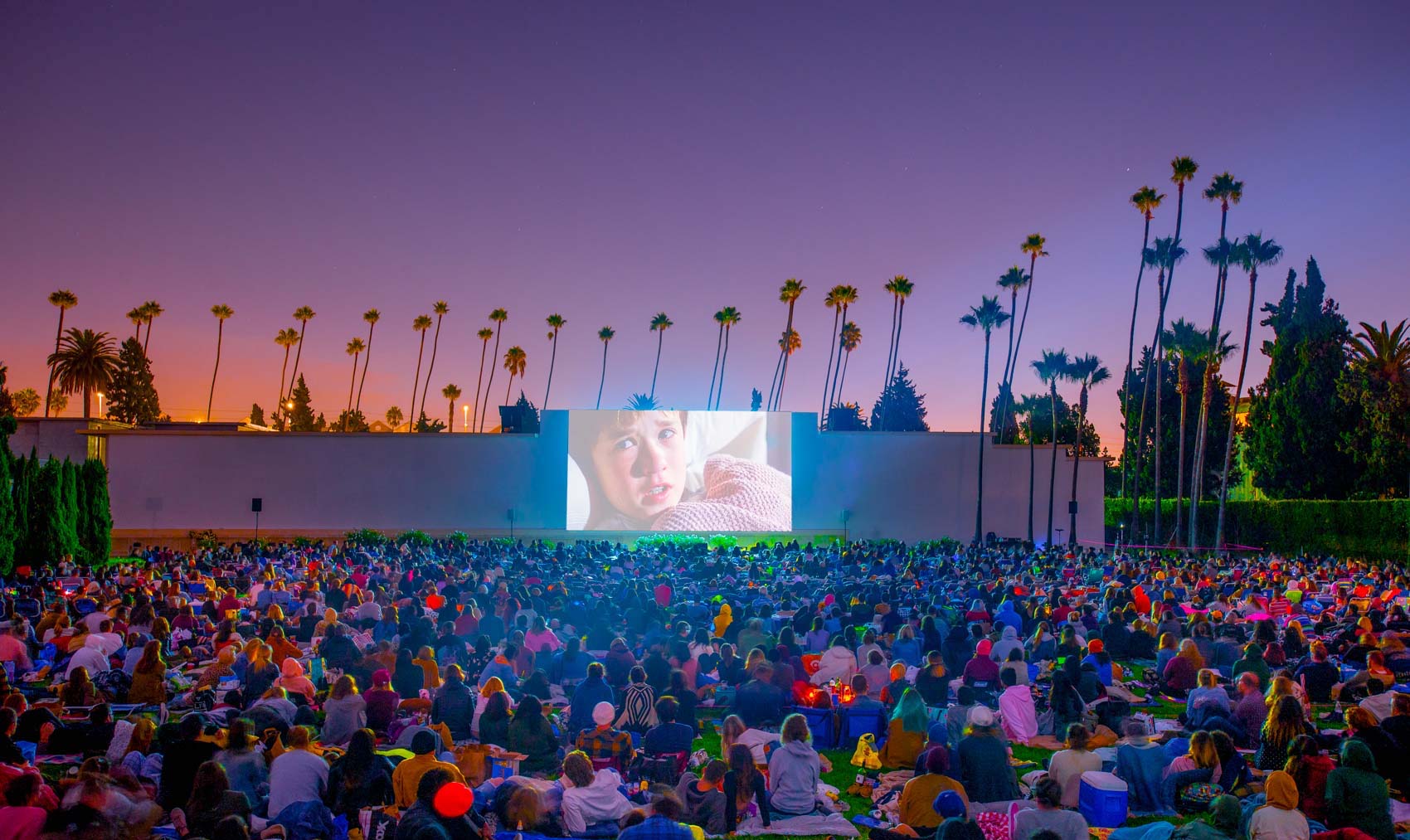 "I see dead people." Hundreds gather at Hollywood Forever Cemetery for a Cinespia screening of The Sixth Sense. | Image Courtesy of Cinespia.

The show must go on, and that’s exactly what’s happening in Tinseltown at the Hollywood Forever Cemetery, which has now added a cultural center to its public space identity. Established in 1899 next to neighboring Paramount Studios, this 50-acre cemetery has become a nightlife and cinematic entertainment hot spot where “dead space” inside the cemetery has found new life for concerts and outdoor films known as Cinespia since 2002. Thousands fill the Fairbanks Lawn every Saturday to watch classic films starring some of the most famous names in film history whose final resting places are the backdrop. Hollywood Forever has also become a destination for the Latino Community during the Día de los Muertos celebration, which draws 30,000 visitors to the event to celebrate this tradition through a variety of activities. 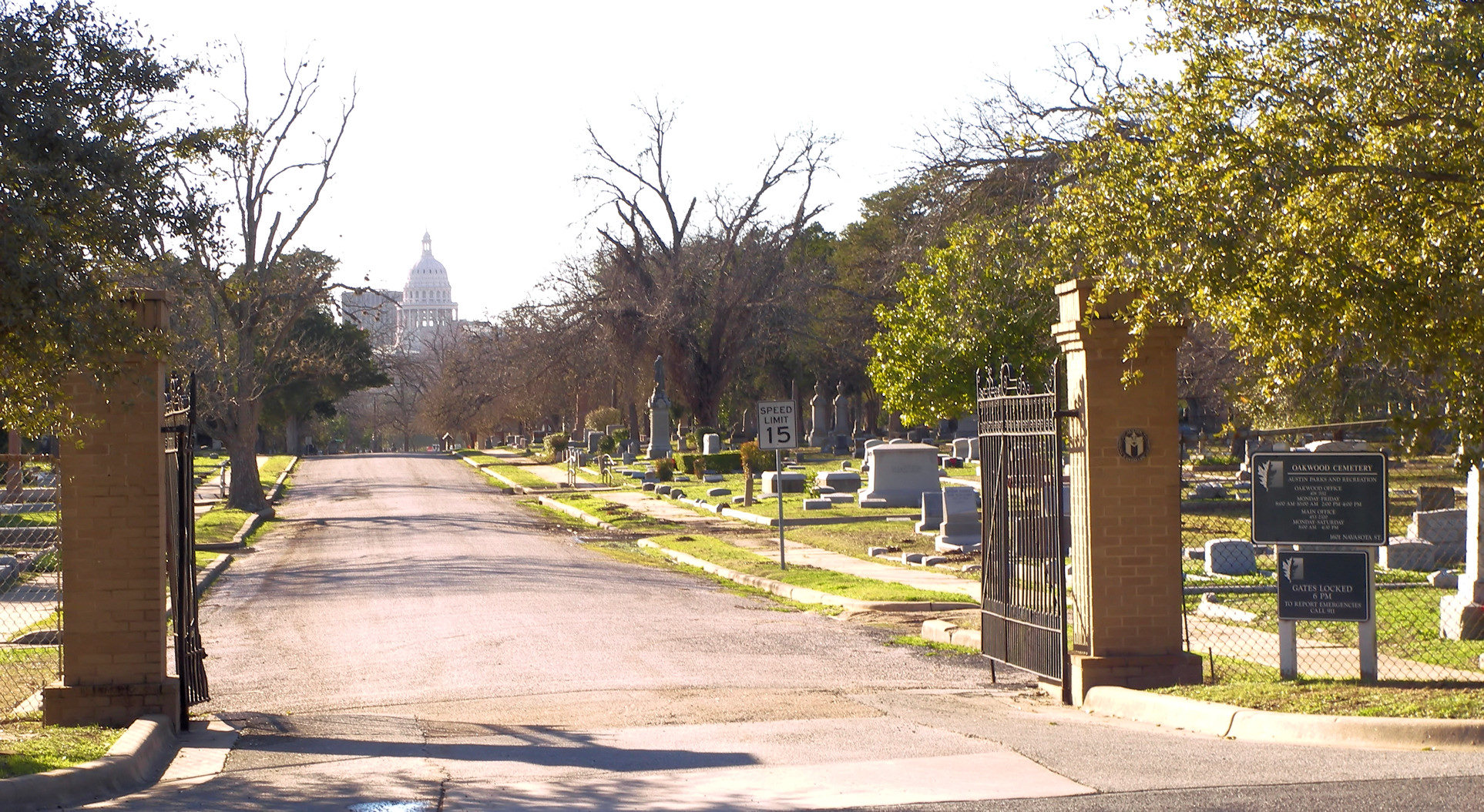 6. THE MUNICIPAL CEMETERIES OF AUSTIN, TEXAS

Other places like Austin, Texas, began exploring how to rethink their inventory of five cemeteries more broadly, and how to sustain them for the future in the face of changing tastes and trends of memorialization, burial preferences, growing population, a mobile society, and rising costs of maintenance. The award-winning master plan for the city’s cemeteries was completed in 2015, and sought to explore, in part, the value these spaces provided to an urban environment. The cemeteries included were Austin Memorial Park Cemetery, Evergreen Cemetery, Oakwood Cemetery, Oakwood Cemetery Annex, and Plummers Cemetery. The five locations represent over 80,000 burials and over 200 acres of land.

The earliest of the cemeteries included in the study date from 1839 and the latest, 1928. The plan for the cemeteries in Austin recognizes them as public space for the capital city by design. The document guides Austin’s government in the ongoing maintenance and management of the five cemeteries with an emphasis on keeping the properties in good condition and function. Sample projects that have emerged from the plan included tree inventories, and preservation and rehabilitation efforts, such as the conversion of a chapel at Oakwood Cemetery into a visitor center, so those structures can continue to serve citizens and visitors to the grounds.

Cemetery Travel: Your Take-along Guide to Graves & Graveyards Around the World
https://cemeterytravel.com/

Is It Street Wear or Is It Art? The hottest new street wear label in Los Angeles is more like a personal art project.  https://www.nytimes.com/2020/10/13/style/mens-fashiion-is-it-streetwear-or-is-it-art.html

The colorful history of Alebrijes and connection to Day of the Dead. KSAT Day of Dead stories highlight tradition and celebration of life and death in Mexico
https://www.ksat.com/news/local/2020/10/15/the-colorful-history-of-alebrijes-and-connection-to-day-o...