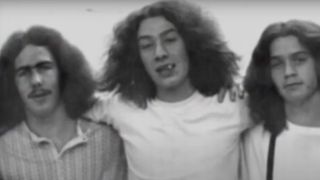 
Mark Stone, Van Halen’s original bassist, has passed away after a battle with cancer.

Stone’s death was confirmed by his brother, Brad Stone, who wrote on Instagram, “My beloved brother Mark passed this morning. #markstone #vanhalen #fanhalen."

Current Van Halen bassist Wolfgang Van Halen tweeted also “Heartbreaking news to hear of Mark’s passing. Met him a few times and he was a wonderful man. My heart goes out to his family.”

Heartbreaking news to hear of Mark’s passing. Met him a few times and he was a wonderful man. My heart goes out to his family 💔 https://t.co/gfGlf4P7WGSeptember 27, 2020

Stone's history with Van Halen goes back to 1972, when he played in the band Genesis with Eddie and Alex Van Halen.

Over time, the trio changed their moniker to Mammoth and began making a name for themselves as the premier backyard party band in Southern California.

In early 1974, David Lee Roth joined the group, taking over the singer slot from Eddie Van Halen, who was pulling double duty on vocals and guitars. Roth convinced the band to change their name to Van Halen, and Stone's playing can be heard on early demos including Gentleman of Leisure and Glitter.

At some point early in Roth’s tenure, Stone departed and was replaced by Michael Anthony, solidifying what would become the classic Van Halen lineup.

Stone was featured in the 2003 documentary Van Halen Story - The Early Years, and in 2015 and 2016 made guest appearances with Fan Halen, a tribute band to the Roth-era lineup.

In The Early Years Stone explained what led to his departure from the band: “I was a straight A student and doing the band and I was split between these two things,” he said. “And basically I couldn’t keep up with them.”

“We met one day and they actually asked me to leave. For a long time it was really tough. It was really tough leaving the band because I knew they were destined for greatness. They say, 'Don't leave before the miracle happens,' and I did."