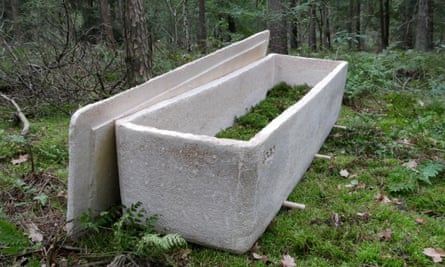 After months of testing, the first funeral has taken place in the Netherlands using a fast-composting “living coffin” made of mycelium, the mat of fibres that forms the underground part of fungi.

“I didn’t actually go, but I talked to a relative beforehand – it was a moving moment, we discussed the cycle of life,” Bob Hendrikx, the founder of Loop, the startup producing the Living Cocoon, told the Metro newspaper.

“He had lost his mother, but he was happy because thanks to this box, she will return to nature and will soon be living like a tree. It was a hopeful conversation.”

Hendrikx, a 26-year-old biodesigner who studied at the Technical University of Delft, told local media that the Living Cocoon allowed “people to become one with nature again. We can enrich the soil instead of polluting it.”

Mycelium is “nature’s recycler”, Hendrikx said. Not only does it neutralise toxins and provide fresh food to everything growing above ground, but its fibres can be used to make anything from food to clothes and packaging – including coffins.

“Mycelium is constantly looking for waste products – oil, plastic, metals, other pollutants – and converting them into nutrients for the environment,” he said. “This coffin means we actually feed the earth with our bodies. We are nutrients, not waste.”

Hendrikx said the process by which a human body in a traditional coffin becomes compost can often take a decade or more, slowed by the varnished wood and metals of the casket and synthetic clothing, which can take even longer to disintegrate.

A mycelium coffin will be absorbed back into the soil within a month or six weeks, he said, actively contributing to the full decomposition of the body it contains and enriching the surrounding soil quality – all within a period of two to three years.

Loop is working with scientists to measure the impact of human bodies on soil quality, with a view, Hendrikx said, to “convincing policymakers to convert polluted areas into healthy forests – with our bodies as nutrients”.

Working in collaboration with two funeral cooperatives in The Hague, the startup has made 10 coffins at a cost of about Ҳ1,250 (£1,150) each. It expects the price to fall significantly as production intensifies and, Hendrikx hopes, mycelium caskets become “a new normal”.

Each Living Cocoon takes several weeks to form as the mycelium mat grows in the shape of a coffin and is then allowed to dry naturally. As soon as it is exposed to damp soil again it comes back to life and begins the decomposition process.