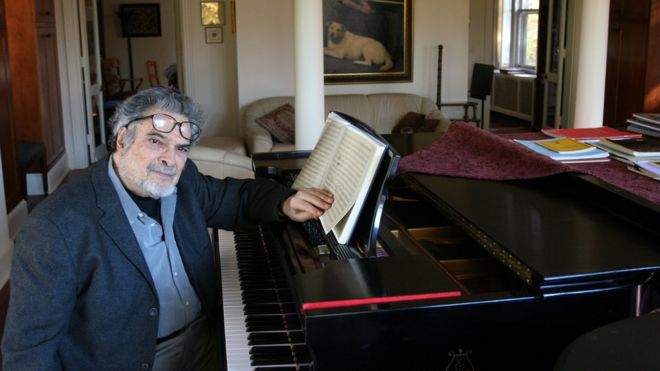 Image copyright GETTY IMAGES. Image captionLeon Fleisher focused decades of his career on music written for the left hand only

Fleisher rose to prominence as a child prodigy in the 1940s but his playing career was disrupted by an injury to his right hand.

He later channelled his career into conducting, teaching and mastering the left-hand repertoire for piano.

Three decades later, after a series of therapies, he regained use of his right hand and flourished again with a two-handed career comeback.

Fleisher was born in San Francisco in 1928, to parents who emigrated to the US from Eastern Europe.

He began learning the piano at age four, and by the age of nine he was invited to be a student of famous classical pianist Artur Schnabel.

At 16 he made his debut with the New York Philharmonic Orchestra and went on to international fame and a prolific recording career.

But in 1964 Fleisher developed a neurological condition, focal dystonia, which left him unable to play with his right hand.

After a two-year hiatus, he focused his career on teaching and conducting at the Peabody Institute in Baltimore, and on performing music written for the left hand only.

"I suddenly came to the realisation that my connection with music was greater than just as a two-handed piano player," he told National Public Radio during an interview in 2000.

He returned to two-handed playing in 1995 and went on to record two highly acclaimed albums. One of them, called Two Hands, is also the title of an Oscar-nominated documentary about his life.