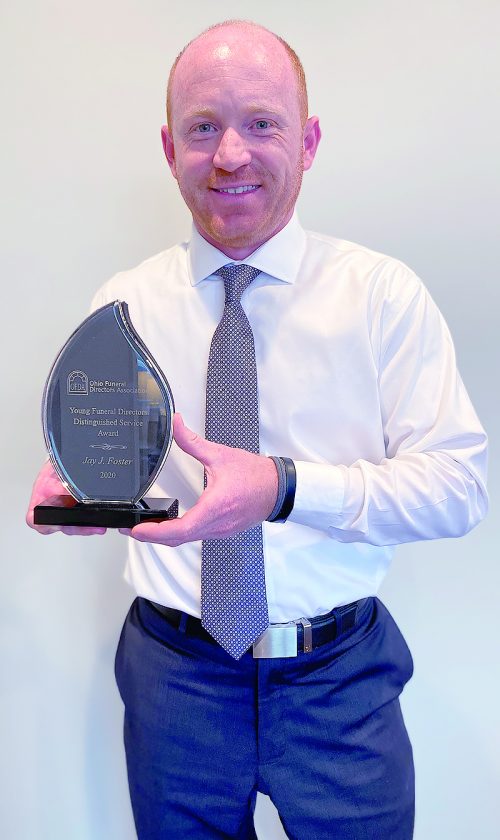 
The award is presented annually by the Ohio Funeral Directors Association and goes to the person who consistently demonstrates outstanding professional and person contributions to his or her community and the funeral service profession.

The honor was announced during a virtual presentation of a June 17 videoconference held in place of the association’s annual conference in Columbus because of the pandemic.

Foster said he was viewing the conference when he received a phone call from a customer and, not knowing he would have an opportunity to comment, missed delivering an acceptance speech.

“It was kind of fitting because of the nature of this industry. It goes to show you’re there for the service you provide,” he said, adding he was surprised and honored to receive the award.

“It’s a statewide award so it is very humbling to even be recognized as a finalist,” Foster said, noting that four other fnalists were from well-known funeral homes serving larger cities.

In his 14th year as a licensed funeral director, Foster has worked with his father, Jeff , for many years.

“I would not have even given the funeral industry a thought for a career if it weren’t for my father and all the sacrifices I watched him make over the years starting our family business,” he said. “I love what I do and I love the communities we serve in Jefferson County. It is a great place to call home and to raise a family. I encourage Everyone that has the opportunity to give back in one or another to do so. Always try to leave something better than the way you found it.”

He noted his father opened the funeral home’s first location in Smithfield in 1985, soon after initiating construction of the Toronto funeral location that was completed in 1987. A cremation center was added to the site last year.

Foster is an announcer at the Toronto High School basketball games and is a strong supporter of the school’s athletic teams.

“With everything I’m involved in, I try to stay as hands-on as I can,” he said, adding he tries to avoid involvement in groups for which he feels he can’t provide adequate time.

Foster received a $500 gift certificate that can be used for OFDA professional development, the award and will have his name added to a plaque in the organization’s office.

Drew C. DeVore and Kevin D. Schroeder finished tied for the second in the evaluation, which was conducted by a panel consisting of members of the Young Funeral Directors Committee, the board of directors and Melissa S. Sullivan, the executive director.

More than 900 funeral homes are a part of of the Ohio Funeral Directors Association. Children working through trauma with art Breaking the taboo to talk about having a ‘good death’