— A new U.S. silver dollar will depict the first teacher to launch towards outer space in a way that is representative of all educators, should the recommendations of two advisory panels and the desires of the late astronaut's family be followed.

Christa McAuliffe, who died on board the ill-fated launch of NASA's space shuttle Challenger in 1986, will be memorialized on the coin, as was authorized by Congress in 2019. The 2021 Christa McAuliffe Silver Dollar Commemorative Coin will be released for sale 35 years after the Challenger tragedy.

"The legislation mandates that coins minted under this act shall bear an image and the name of Christa McAuliffe on the obverse and depict the legacy of Christa McAuliffe as a teacher on the reverse," April Stafford, director of the U.S. Mint's Office of Design Management, said at a meeting of the Citizens Coinage Advisory Committee (CCAC) that was held by teleconference on Tuesday (June 23).

Following those guidelines, the U.S. Mint's artists developed 12 candidate designs for the obverse, or "heads" side, of the coin and 15 concepts for the reverse. The artwork differed in the choice of style for McAuliffe's portrait and the way in which her legacy was represented, including a chalkboard drawing of an astronaut and a space shuttle flying alongside pencils to symbolize the latter.

After reviewing all of the designs, the 11 members of the CCAC voted and, by a clear majority, sided with the choices of the McAuliffe family.

"We prefer it by a very wide margin," Steven McAuliffe, a U.S. District Court judge for New Hampshire and the widower of Christa McAuliffe, told the committee, describing his and his family's preferred design. "With respect to the obverse, it is a very accurate likeness. It comes from a photograph that is one of our favorites."

The heads-side design focuses on McAuliffe's profile, in a way reminiscent of the U.S. Mint's more traditional commemorative coins. The black and white NASA photograph on which it was based was taken on Sept. 12, 1985, while McAuliffe, NASA's "Teacher in Space" participant, received a briefing on the flight suit and personal hygiene equipment that she would use on Challenger's STS-51L mission.

"With respect to the coin and the purpose of the coin, I think what strikes me is the gaze is to the future, as it should be," said Judge McAuliffe. "It is the look of quiet, committed courageousness."

Dean Kamen, a noted inventor and the founder of FIRST, or For Inspiration and Recognition of Science and Technology, agreed with Judge McAuliffe and said that the design reminded him of the traditional coins that featured large busts of George Washington and Abraham Lincoln, or example.

"One of the reasons that we like the likeness on the obverse side of the coin... [is] this looks very much like a genuine coin. That prestige is important," said Kamen. "Anything else would make it look like an award."

Surcharges from the sale of the McAuliffe silver dollar will benefit Kamen's FIRST organization and its student robotics competitions for "the purpose of engaging and inspiring young people through mentor-based programs to become leaders in the fields of science, technology, engineering and mathematics," Stafford said, citing the coin's authorizing bill.

The family's preferred tails-side design depicts McAuliffe in her role as a New Hampshire social studies teacher, prior to her being selected for NASA's Teacher in Space program from a nationwide pool of more than 11,000 applicants. She is shown standing alongside three children while pointing upwards to the sky.

"I think teachers will very much appreciate the reverse design," said Judge McAuliffe. "Christa always stressed in her role that she was a representative of teachers. She always understood and stressed for everybody, and appreciated for herself, that she wasn't singled out for her own personal accomplishments and attributes. She was singled out and chosen to be a representative of classroom teachers, and that is the role in which she reveled."

"So the reverse, depicting her in that teaching role, is significant and very important to us and would be very important to her. The reverse captures what teachers actually do, it shows the relationship with students involved in active teaching," he said.

The tails-side artwork includes the FIRST logo and McAuliffe's motto, "I touch the future. I teach." It also includes a subtle tribute to her six Challenger crewmates — Dick Scobee, Mike Smith, Elison Onizuka, Judy Resnik, Ron McNair and Greg Jarvis — who with her were killed when a faulty rocket booster led to Challenger breaking apart 73 seconds after liftoff on Jan. 28, 1986.

"The seven stars do relate this to the other astronauts, but for the fact that this a coin about a teacher," said Kamen.

"This is the first coin I believe in the history of the United States that recognizes a teacher. FIRST is about that, so the fact that this coin is so strongly on both sides representing the woman, the teacher, the students and it has the FIRST logo and the FIRST name, I couldn't ask for more," he said.

Many of the CCAC members said they would have selected the same designs even if they had not known the designs had the endorsement of the family and the coin's benefiting organization. Some of the members praised some of the other designs for their modern approach to portraiture or for their less subtle references to spaceflight, but at the same time were happy with the choices.

"It doesn't emphasize so much one particular part of the commemorative, whether it is Christa or FIRST or being an astronaut," CCAC chair Thomas Uram said. "These designs that the family has chosen I think represent all three elements that we wanted to be accomplished for this commemorative."

Uram also recognized the tragic history connected to the coin, and the McAuliffe family's role in seeing this honor take shape.

"I would say as difficult as that day was many years ago, I would say so great is the process and your journey towards this significant commemorative. And I think I could speak for the committee that we are definitely humbled to be part of this," he said.

In addition to the CCAC, members of the Commission of Fine Arts also reviewed the designs and on Thursday (June 19), arrived at the same decision to support the family's selected designs.

Both the commission and the CCAC will submit their recommendations to the Secretary of the U.S. Treasury, who will make the final decision on the design of the 2021 Christa McAuliffe Silver Dollar Commemorative Coin. Per Congress, the U.S. Mint will strike no more than 350,000 of the 1.5-inch (3.8-centimeter) coins, for which an issue date has yet to be released. 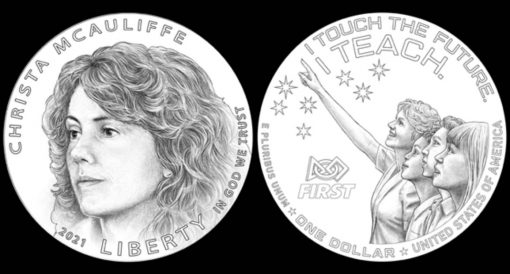 The preferred obverse (at top) and reverse designs for the 2021 Christa McAuliffe Silver Dollar Commemorative Coin, as identified by the Commission of Fine Arts and Citizens Coinage Advisory Committee (CACC), as well as the McAuliffe family. (U.S. Mint) The U.S. Mint's artists developed 12 designs for the obverse and 15 concepts for the reverse of the 2021 Christa McAuliffe Silver Dollar Commemorative Coin. (U.S. Mint, montage: collectSPACE)

The McAuliffe family's preferred design for the obverse of the 2021 Christa McAuliffe Silver Dollar Commemorative Coin was based on this photo, showing McAuliffe in training in 1985. (NASA)

The sale of the Christa McAuliffe Silver Dollar Commemorative Coin will benefit FIRST and its programs to engage students in science, technology, engineering and math programs. (FIRST)