Its estimated 90,000 tombs are a link to Singapore’s early Chinese pioneers, and plans by the government to build over that legacy have sparked a rare burst of grass-roots activism in a city that is as sweltering as it is passive.

The fight to save the cemetery is not driven by protests and placards. Preservationists have instead organized online to arrange walking tours. Others have performed dances and plays at the cemetery, thought to be among the largest Chinese burial grounds outside China.

But garnering wider support in Singapore has been challenging. Many of the city’s predominantly ethnic Chinese residents, discouraged by taboos about disturbing the dead, are wary of venturing into the cemetery if not for a burial or visiting a family tomb.

Artist Jennifer Lim has no such qualms. An Australian who has four relatives interred at Bukit Brown, she has drawn attention to the cemetery by focusing on often overlooked flourishes that speak to the city-state’s colonial and cultural evolution.

For the last six months, she and teams of volunteers have been exploring the property’s dense thicket to clean and document thousands of mostly European ceramic tiles that speckle many of Bukit Brown’s grander tombs.

The floral and geometric-patterned slabs are unmistakable symbols of Singapore — colorful images that have long adorned the city’s quintessential multi-story shophouses with their plantation shutters and ground-floor colonnades.

Singapore’s wealthier residents imported the decorative relief tiles from Europe and Japan up until the 1930s as a way to display their social standing and cultural pedigree — not just for their time on Earth, but in the afterlife.

These tiles have rapidly diminished in number after decades of urban renewal. Some still appear on EBay or at overseas auctions, fetching hundreds of dollars apiece. Few, if any, places retain a collection quite like Bukit Brown, which many liken to an outdoor museum. Bukit Brown closed in 1973, allowing the jungle to reclaim swaths of the cemetery. It’s not uncommon to see trees growing on top of tombs. (David Pierson / Los Angeles Times)


Lim’s work, which will be published in a book later this year, aims to remind Singaporeans of the beauty and history that lurk in unsuspecting places.

“The tiles are often taken for granted,” said Lim, 43, during a recent trek through the lush graveyard, which closed in 1973. “I’m merely trying to showcase to Singapore what lies here under the canopy. These are treasures.”

Singapore hasn’t neglected historical preservation. A quick glance at the city reveals neighborhoods of shophouses still intact and grand restoration projects such as the National Gallery — an art museum, which fuses together the colonial-era former Supreme Court building and the former city hall with a soaring glass atrium.

Cemeteries, on the other hand, are a luxury the land-scarce nation can ill afford. The country of 5.8 million squeezes onto an island slightly bigger than the San Fernando Valley. Many historical burial sites have been paved over to house a swelling population. Bukit Brown itself is slated to be redeveloped for housing by 2030.

“Given our land limitations and many competing needs, we have to manage a fine balance between conserving our physical heritage, while supporting our nation’s growth in an economically, socially and environmentally sustainable manner,” Singapore’s Urban Redevelopment Authority said in a statement.

Only one active cemetery remains in Singapore, and occupants there are granted 15 years in the ground before they are exhumed and either cremated or relocated. Even that cemetery is in the process of removing 80,000 graves to make way for the expansion of an air force base.

It’s a problem that confounds many crowded cities short on space such as Hong Kong, where a burial plot costs more per square foot than an apartment. Even storing ashes in a public columbarium requires years on a waiting list.

Lim’s entree to these same tensions in Singapore came eight years ago. She and her husband and 8-month-old daughter had been living here a few months when she received an unexpected phone call from her uncle. He told her that there were undisclosed family matters to settle and that she needed to appear at Bukit Brown.

It was her first visit to the municipal cemetery, which opened in 1922 featuring Singapore’s first official hybrid Malay and English name for a location. Bukit means hill and Brown was taken from George Henry Brown, a British ship owner, trader and broker who lived near the cemetery. 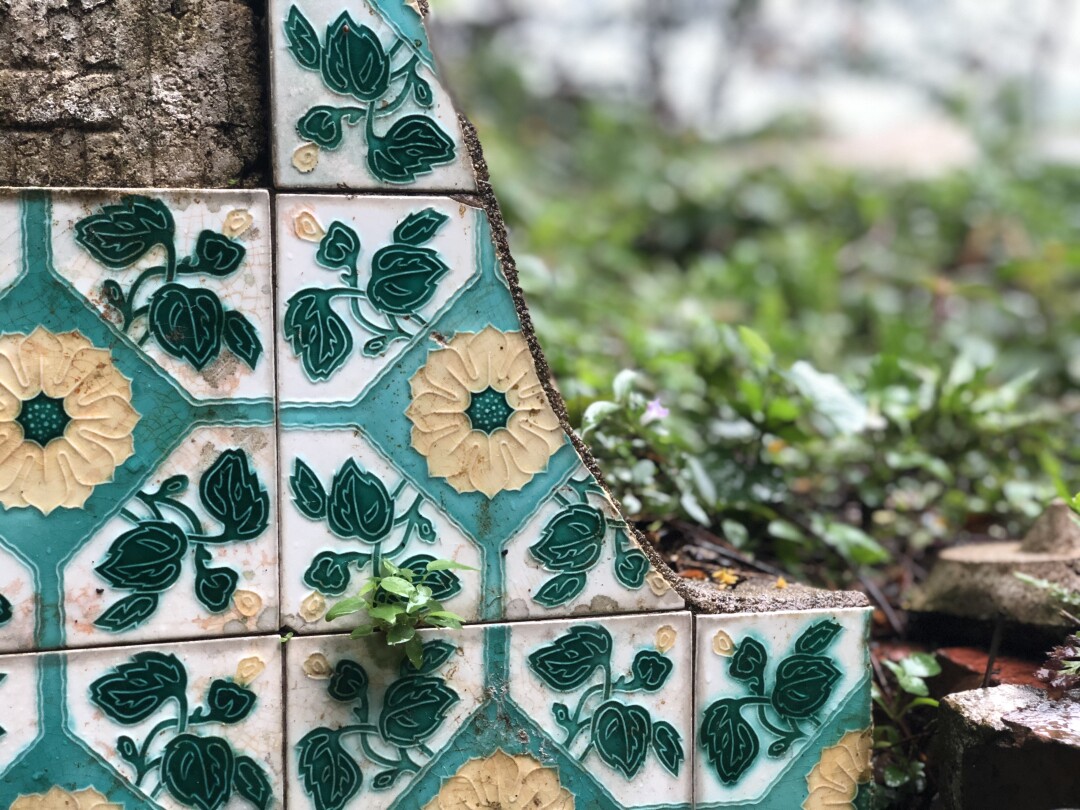 Many of the tiles were laced with lead, which, though toxic, appears to have helped preserve the ceramics in Singapore’s tropical climate. (David Pierson / Los Angeles Times)

Lim met her uncle there under a blue tarpaulin, which protected a pair of gray headstones from a tropical downpour. Monks in yellow robes burned incense, and workers in rubber boots stood to the side with shovels at the ready.

“That’s when I learned my great-grandfather and his brother were about to be dug up,” Lim said.

The two ancestors were among some 4,000 buried at Bukit Brown that had to be disinterred to make way for a highway extension that opened last year. The regularity of exhumations in Singapore fuels a thriving cottage industry that’s not for the faint of heart. Gravediggers must typically work after sundown because of beliefs that spirits dread the light. And Singapore’s muggy weather means remains don’t always fully decompose, even after 15 years under the earth.

“You get used to the smell,” said Lee Hwee Kim, 63, a second-generation gravedigger who has found ample work at Bukit Brown over the years. “If you don’t, you can’t make a living.”

Lim had come to Singapore to discover her roots and to find artistic inspiration. As a printmaker, she was drawn to the tiles she saw during her first visit to Bukit Brown. She learned they were often called Peranakan tiles in recognition of some of the Chinese sojourners who first came to Southeast Asia two centuries ago and chose to stay. Many would marry local women despite already having families in China, what Lim jokingly calls a “double insurance plan.”

Known as the Straits Chinese or Peranakan Chinese, they created a hybrid culture distinct for its maximalist aesthetic and its heavy and cumbersome cuisine.

Many of their offspring prospered as Singapore supplied the world with tin and rubber from across the region. They spoke English and adopted European customs such as the tiles, distinguishing themselves from newer Chinese immigrants.

Many Peranakan Chinese families still maintain the mantle of “old money,” not unlike the fictional Young family in the film “Crazy Rich Asians.” Even Singapore’s founder, Lee Kuan Yew, has Peranakan roots. Some of his maternal descendants were discovered at Bukit Brown in 2014 by a pair of paranormal investigators who lead tours through the cemetery.

Lim traces her Singaporean heritage to the 1800s through a combination of Peranakan and Hokkien families, the latter deriving from southern China’s Fujian province.

Her background serves her well when anyone questions her motives, particularly as her predominantly Western features obscure her Chinese half (Lim’s Australian mother is of English and German descent). 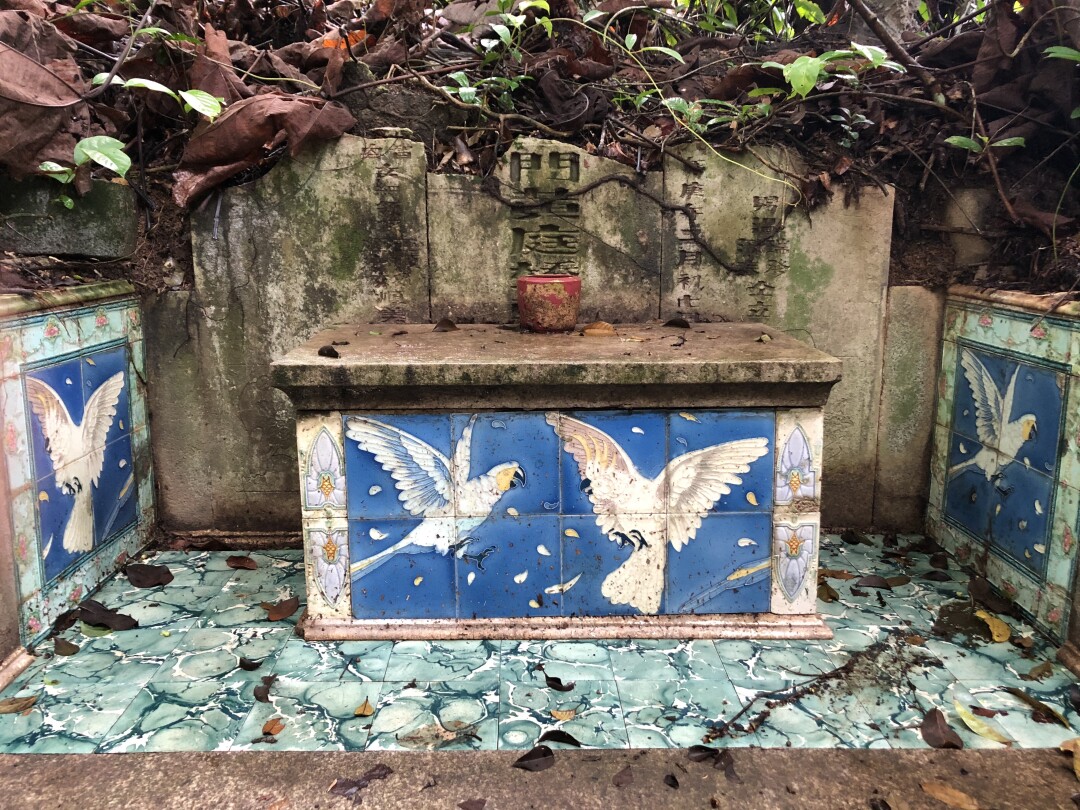 
Cleaning and photographing tiles belonging to local Chinese families can be a sensitive matter. Lim visits only what appear to be abandoned tombs. Even then, she makes sure not to share images of their headstones, just the tiles, which tend to be arranged to the side of tombs on low-slung walls, benches and by statues of deities placed there to protect the deceased.

Pictures she posted on Facebook helped at least one Singaporean locate her ancestor’s long-lost tomb. Other people have reached out to say her work has inspired them to research their ancestry at the cemetery.

The overgrowth makes it nearly impossible for some families to find their descendants without the help of one of the few caretakers that tend the grounds. Some neglected graves have been swallowed whole by trees, their roots gripping the headstones like an octopus holding prey.

Chinese cemeteries aren’t built like those in the West, which are made to mimic gardens to invite visitors. Instead, tombs at Bukit Brown are placed on the side of hills to optimize feng shui, making a hike through the 174-acre site a grueling proposition.

Lim has visited the cemetery 52 times in the last half-year. Despite the agonizing heat, she wears long sleeves and long pants to block the mosquitoes. She even puts on gloves to stop them from biting her knuckles. Visitors who fail to tuck their pants into their socks risk inviting red ants up their legs.

To scare away snakes, Lim relies on her Australian bushwalking experience by deliberately walking slowly and speaking loudly.

“Best to do it in a loud Aussie voice,” said Lim, who in all her time at Bukit Brown has only once crossed paths with a snake, a young cobra.

To guide her to new discoveries, Lim relies on a caretaker who grew up in a village that used to share the cemetery grounds. Under decades of soil, vines and mold, he’s helped her find relics of a proud past — tiles that not only came in the standard prints, but some depicting Chinese lions with fiery manes, tigers amid snow-covered bamboo, cockatoos and even milkmaids.

The often tin-glazed ceramics included lead, which despite being toxic, appears to have helped preserve the tiles in Singapore’s unforgiving equatorial climate.

All told, Lim and more than 100 volunteers used little more than damp cloths to help bring back to life more than 2,000 tiles — or, as Lim likes to describe them, “ladies who’ve been given a face-lift after a century under mud.”


David Pierson is a Southeast Asia correspondent for the Los Angeles Times in Singapore.