Videos on social media have shown officers beating people for violating India's coronavirus lockdown. The opposition has called on Prime Minister Narendra Modi to stop police from using violence to enforce the measures.

Authorities in India have come under fire after videos surfaced on social media showing officers hitting and demeaning people on the street to enforce the country's 21-day coronavirus lockdown.

"I have no doubt that most police personnel are doing a commendable job in these difficult times. However, those who brutalize citizens are bringing disrepute to the efforts of all others," Tharoor wrote in a letter posted on Twitter on Friday.

He noted that "vigilantes" have also been spotted standing on corners and beating those who defy the lockdown orders. "We are better than this," Tharoor added.


I wrote to ⁦@PMOIndia⁩ ⁦@narendramodi⁩ this morning to raise some immediate concerns on management of the #COVID19 #lockdown raised by professionals of the All-India Professionals’Congress ⁦@ProfCong⁩, relating particularly to problems faced by professionals: 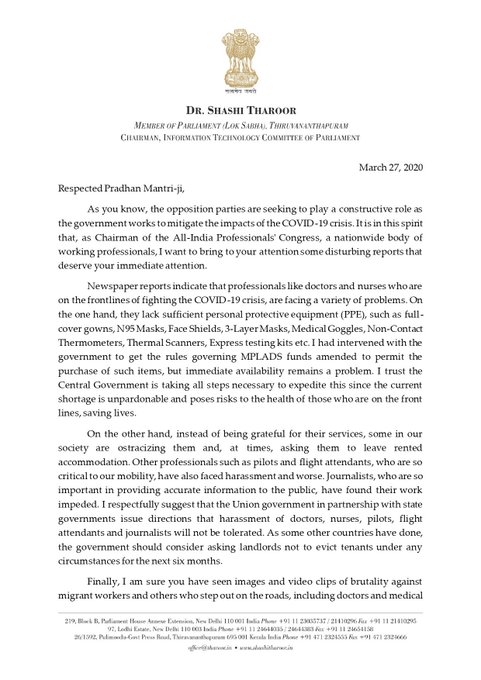 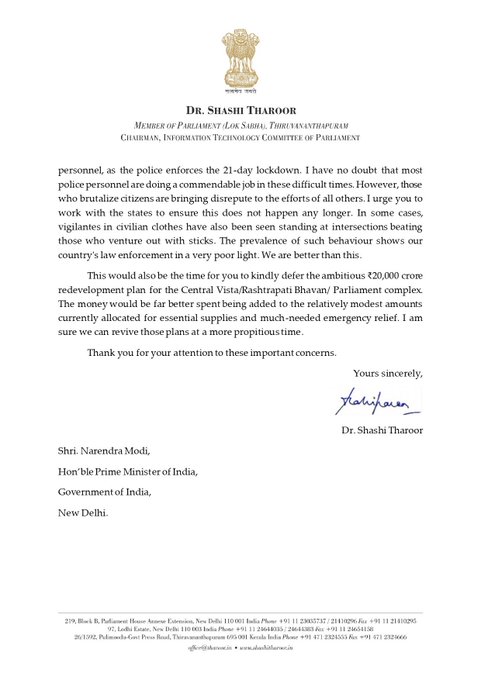 206 people are talking about this

Tharoor's letter followed the online circulation of several videos and images depicting police brutality after the imposition of a 21-day lockdown to slow the spread of the COVID-19 outbreak in India.

On Friday, authorities launched an inquiry into the death of an ambulance driver in the city of Pune who was allegedly beaten by police, the Times of India reported. Police suspected him of illegally transporting passengers in his vehicle.

The Times of India also reported that a 32-year old man in the state of West Bengal died on Wednesday after being wounded by police. The man's family claims he was hit when he ventured out to buy milk.

Earlier this week, the sale of essential services, such as grocery and food deliveries, were temporarily disrupted in the state of Maharashtra — where the cities of Pune and Mumbai are located — after reports emerged that people venturing out were being beaten by the police.

Uddhav Thackeray, the chief minister of the state of Maharashtra, urged the state's head of police to rein in officers following reports of indiscriminate beatings, reported the Economic Times, an English-language Indian daily.


The police in India resorted to violence in some cities and towns as the country struggled with the coronavirus lockdown https://reut.rs/2vPoCph 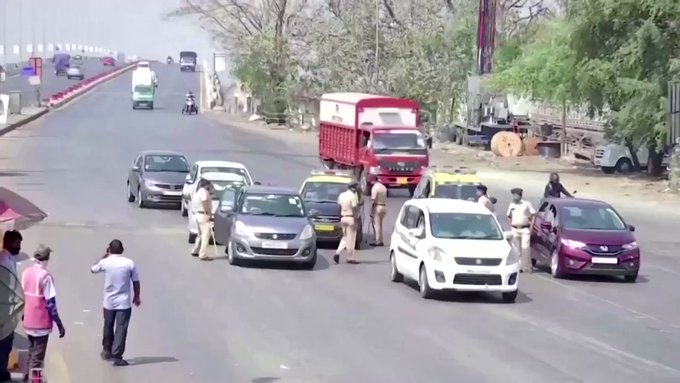 2,091 people are talking about this

Prohibitory law allows police to arrest, but not use force

India has invoked Section 144 of the Indian Penal Code (IPC), which prohibits the assembly of four or more people, to ensure that people don't venture out during the lockdown and to contain the spread of the coronavirus. Indians violating section 144 can be arrested and detained by the police. However, the government hasn't authorized the police to use force to impose the lockdown.

Over the past week, several politicians, celebrities and journalists have highlighted police violence against migrant workers who are venturing out during the lockdown. The measures have forced migrant laborers to travel back to their homes on foot after losing their jobs in urban areas.

Numerous reports have emerged of police targeting people venturing out to buy essential goods or working in essential services such as medicine. Officers have reportedly beaten people with sticks and in certain instances, forced them to crawl or do pushups.

THIS-Heartbreaking!
Video from Badaun, UP
Poor boys who’re on foot from Gwalior, WERE MADE TO CRAWL by UP Police
Cops been asked to help distressed migrants, not ill treat them like this.
Many cops doing good work but this is unacceptable! @pranshumisraa #CoronavirusLockdown

7,220 people are talking about this

India currently has over 880 confirmed COVID-19 cases, while 20 people have died, according to the latest figures from the Johns Hopkins University tracker. Modi announced the sweeping lockdown measures on Tuesday in a bid to slow the spread of the virus among the country's 1.3 billion inhabitants.

I wrote to вЃ¦@PMOIndiaвЃ© вЃ¦@narendramodiвЃ© this morning to raise some immediate concerns on management of the #COVID19 #lockdown raised by professionals of the All-India ProfessionalsвЂ™Congress вЃ¦@ProfCongвЃ©, relating particularly to problems faced by professionals: pic.twitter.com/QjXbasFMv6

The police in India resorted to violence in some cities and towns as the country struggled with the coronavirus lockdown https://t.co/etxxQSALnW pic.twitter.com/HVMC8vZpBr