One of the first country artists to sell out arenas, Mr. Rogers sold more than 100 million records in a career that spanned decades.


Kenny Rogers, a prolific singer who played a major role in expanding the audience for country music in the 1970s and ’80s, died on Friday at his home in Sandy Springs, Ga. He was 81.

His death was announced by his publicist, Keith Hagan. Mr. Hagan did not specify the cause but said Mr. Rogers had been in hospice care. Mr. Rogers retired from performing for health reasons in 2018.

Singing in a husky voice that exuded sincerity and warmth, Mr. Rogers sold well over 100 million records in a career that spanned seven decades. He had 21 No. 1 country hits, including two — “Lady,” written and produced by Lionel Richie, and “Islands in the Stream,” composed by the Bee Gees and performed with Dolly Parton — that reached No. 1 on the pop chart as well.

By the time he stopped performing, Mr. Rogers had placed more than 50 singles in the country Top 40, of which 20 also appeared in the pop Top 40. Long before the ascendancy of Garth Brooks and Shania Twain in the 1990s, he was among the first country artists to sell out arenas.

Mr. Rogers’s popularity stemmed partly from his genial persona and rugged good looks, but also from his ability to inhabit his material, which, he often said, was of two main types: love songs like “You Decorated My Life” and narrative ballads like “The Gambler” and “Lucille.”

“All the songs I record fall into one of two categories, as a rule,” he said in a 2012 interview with NPR. “One is ballads that say what every man would like to say and every woman would like to hear. The other is story songs that have social significance.

“‘Reuben James’ was about a black man who raised a white child,” he continued, referring to a 1969 song that was a Top 40 hit for his group Kenny Rogers and the First Edition. “‘Coward of the County’ was about a rape. ‘Ruby, Don’t Take Your Love to Town’ was about a guy who came home from war.”

“Ruby” in particular revealed Mr. Rogers’s command as an interpreter of narrative ballads. Written by Mel Tillis, the song is about a veteran, left impotent and in a wheelchair after being wounded in war, who must endure the agony of watching his wife leave the house every night to meet other men.

“And if I could move, I’d get my gun and put her in the ground,” Mr. Rogers broods as the record ends. 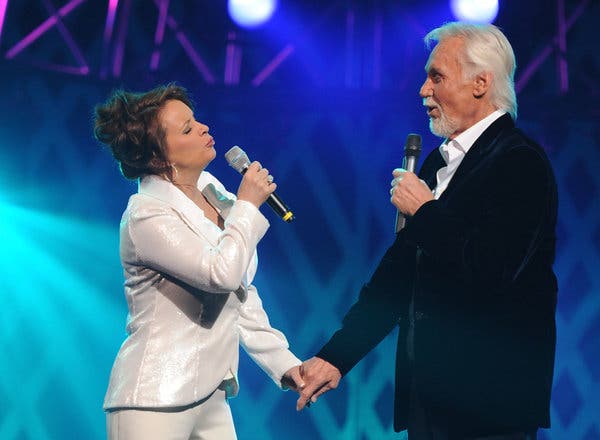 Duo recordings were a prominent part of Mr. Rogers’s repertoire. He and Sheena Easton, seen here in concert at the Foxwoods resort in Connecticut in 2010, had a hit in 1983 with “We’ve Got Tonight.”Credit...Rick Diamond/Getty Images


Duo recordings were a prominent part of Mr. Rogers’s repertoire, accounting for more than a dozen country hits, including eight No. 1 records. Several of them, including “Don’t Fall in Love With a Dreamer,” a 1980 duet with the pop singer Kim Carnes, and “We’ve Got Tonight,” a remake of a Bob Seger hit performed with the Scottish singer Sheena Easton, were pop successes as well.

Mr. Rogers was particularly fond of singing the harmony part on vocal collaborations. In a 2013 episode of the television program “The Big Interview With Dan Rather,” he explained that harmonies had fascinated him ever since he first heard his older sister Geraldine singing them in church.

“I’d never heard harmony before, and I said, ‘What are you singing?’” he recalled. “She said, ‘Well, that’s called harmony, where you don’t sing the melody, but you sing something that sounds good with the melody.’ And I thought, ‘Oh, I’d like to do that.’”

Mr. Rogers also recorded with R&B artists like James Ingram and Gladys Knight. Both the rapper Wyclef Jean and the neo-soul singer Anthony Hamilton have used passages from his music in their work.

Mr. Rogers came by his wide-ranging musical sensibilities naturally. After graduating from high school, he played upright bass in the Bobby Doyle Three, a well-regarded jazz trio. He became a member of the folk ensemble the New Christy Minstrels in the mid-’60s.

He later experimented with pop psychedelia on the First Edition’s 1967 single “Just Dropped In (To See What Condition My Condition Was In),” a Top 10 pop hit written by Mickey Newbury, with whom Mr. Rogers attended high school.

Most of Mr. Rogers’s material was written by others. Two notable exceptions were “Sweet Music Man,” a Top 10 country single in 1977 written solely by Mr. Rogers, and “Love or Something Like It,” a No. 1 country hit the next year, which he wrote with his longtime keyboardist, Steve Glassmeyer. 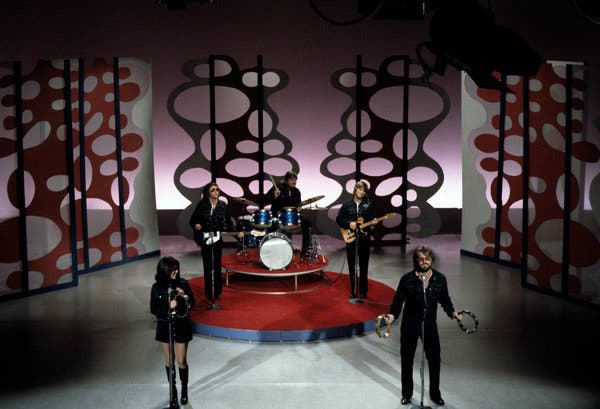 Mr. Rogers, lower right, with his band the First Edition on “The Johnny Cash Show” in 1970. The group’s “Just Dropped In (To See What Condition My Condition Was In)” was a Top 10 pop hit in 1967.Credit...Walt Disney Television, via Getty Images


Mr. Rogers also had an acting career, most notably a starring role in a series of TV movies based on his signature song, “The Gambler.” He also starred in the 1982 feature film “Six Pack.”

He was also an avid photographer. He published two volumes of his work: “Kenny Rogers’ America” (1986), an assortment of photos of national landmarks and other places of interest, and “Your Friends and Mine” (1987), a collection of portraits of fellow celebrities like Elizabeth Taylor and Michael Jackson.

More a fan favorite than a critics’ darling, Mr. Rogers was something of a late bloomer in country music; his career as a solo artist did not gain traction until after his breakthrough single, “Lucille,” was released by United Artists in 1977. He was 38 at the time.

“The executives at United Artists Records thought I was too old, creeping up on 40, and too pop to have much success in country,” Mr. Rogers wrote of his recording career before “Lucille,” a cheating song complicated by the narrator’s conscience-haunted change of heart, in his 2012 memoir, “Luck or Something Like It.” “Lucille” became his first No. 1 country hit and reached the pop Top 10 as well.

“Once we made the story song a viable art form for me, the songs just poured in,” he added, alluding to subsequent hits like “Coward of the County” and “The Gambler.” “Every songwriter with a story song sent it to me.”

Kenneth Donald Rogers was born on Aug. 21, 1938, in Houston. The fourth of eight children, he grew up in San Felipe Courts, a public housing development in the city’s Fourth Ward.

His father, Edward Floyd Rogers, was a carpenter and amateur musician who struggled with alcohol. His mother, Lucille (Hester) Rogers, had only a third-grade education but held the family together, making ends meet by cleaning offices and working in a hospital. 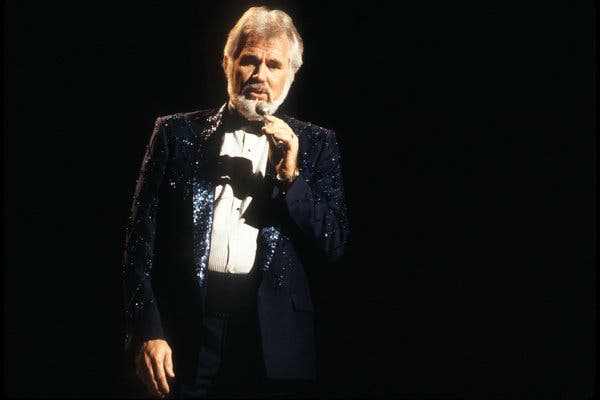 Mr. Rogers in 1985. He was one of the first country singers to sell out arenas, well before the rise of Garth Brooks and Shania Twain.Credit...Walt Disney Television, via Getty Images


Music was a refuge early on. “My dad wasn’t in the business, but he played fiddle,” Mr. Rogers recalled in a 2014 interview with Rolling Stone. “All of his brothers and sisters played some instrument, so we used to get in the cab of a pickup truck and ride up to Apple Springs, Texas, where all my aunts and uncles would get on the front porch and play music.

“I used to sing in the church choir and at school,” he continued, “but my interest actually started when I was 12 years old and went to see Ray Charles in concert.

“It was like an epiphany. People laughed at everything Ray said, they clapped for everything he sang. I thought, ‘Boy, who wouldn’t want to do that?’ I didn’t even know I could sing at the time. I just loved the honesty of his music.”

(More than three decades later, Mr. Rogers and Mr. Charles would be among the featured vocalists on the Grammy-winning all-star benefit recording “We Are the World.”) 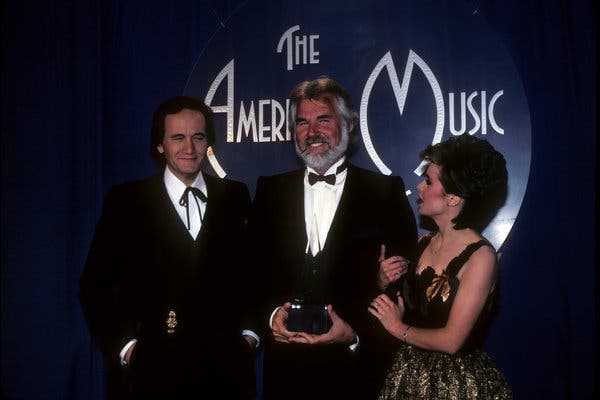 Mr. Rogers, center, with Roger Miller and Ms. Easton at the American Music Awards in 1983. He won that year’s award for favorite male country artist.Credit...Walt Disney Television, via Getty Images


While still in high school, Mr. Rogers formed a doo-wop group, the Scholars, in which he sang four-part harmonies and played guitar. After the group split up, he had a regional hit with “That Crazy Feeling,” issued by the independent Carlton label in 1958. The single’s popularity earned him an appearance on “American Bandstand.”

A decade later, Mr. Rogers and the First Edition were guests on prime-time variety shows like “The Smothers Brothers Comedy Hour,” “The Ed Sullivan Show” and “Rowan & Martin’s Laugh-In.” Thirty years on, their hit single “Just Dropped In” was used in a dream sequence in the Coen brothers’ movie “The Big Lebowski.”

Mr. Rogers was also a successful entrepreneur. His best-known enterprise was Kenny Rogers Roasters, a chain of chicken restaurants he opened with John Y. Brown Jr., the former governor of Kentucky and chief executive of Kentucky Fried Chicken. Opened in 1991, the chain — which was, among other things, the subject of a memorable episode of “Seinfeld” — closed in the United States 20 years later but has continued to prosper overseas, particularly in Southeast Asia.

In 2013, Mr. Rogers published a novel, “What Are the Chances,” written with Mike Blakely. 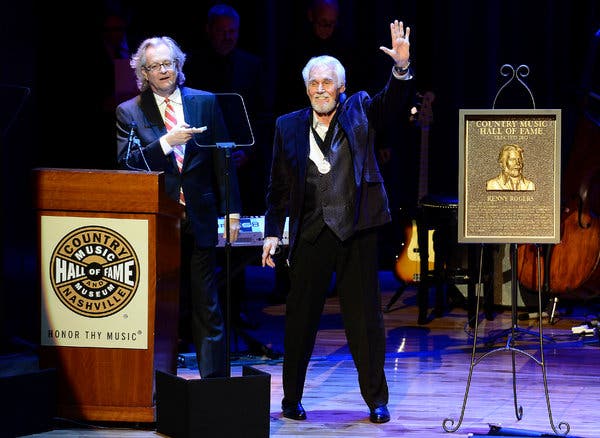 Mr. Rogers was inducted into the Country Music Hall of Fame at in Nashville in 2013. At left is Kyle Young, the Hall of Fame’s chief executive.Credit...Mark Zaleski/Associated Press


Mr. Rogers received many accolades during his career, among them three Grammy Awards and recognition for lifetime achievement from the Country Music Association. In 2013 he was inducted into the Country Music Hall of Fame.

Eclecticism in music is sometimes attributed to a lack of originality or focus. But for Mr. Rogers, drawing on an array of styles and collaborating with a wide range of artists worked in his favor.

“One of the strengths of my eclectic musical history,” he wrote in his memoir, “perhaps dating all the way back to that day as a child when I heard gospel music pouring out of the little church in Houston, is that I never felt hamstrung by one form, even if I had been successful with it.

“During the First Edition days, for instance, I was perfectly comfortable going from a drug-culture song, ‘Just Dropped In,’ to a country-tinged story song like ‘Ruby.’ Having been exposed to and well versed in all kinds of music before Nashville, I saw no reason to limit the range of songs I could do after getting there.”

The Rogers family is sad to announce that Kenny Rogers passed away last night at 10:25PM at the age of 81. Rogers passed away peacefully at home from natural causes under the care of hospice and surrounded by his family. https://t.co/adxAgiMW2s pic.twitter.com/nggWiiotMT