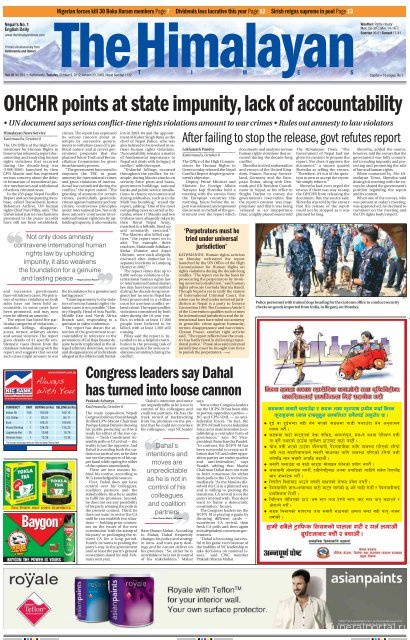 In Nepal, suicide rate has risen by 60 per cent in comparison to the 1990s statistics. Police report states it has almost doubled in the last 10 years; from 8 per day to around 16 per day. But the statistics of the “mass-suicides” as stated above is lacking

The headlines in the mainstream media this Saturday shocked me very much: A family suicide involving parents and their two children. One year ago, similar incident happened in Chitwan, where three members of a family died on the spot! The two incidents of family suicides in Kavre, in succession of just about a week, that happened two years ago, still has not drained out of my mind!  Yes, around 1 million people die per year due to suicide, one person in every 40 seconds, WHO statistics say.

In Nepal, suicide rate has risen by 60 per cent in comparison to the 1990s statistics. Police report states it has almost doubled in the last 10 years; from 8 per day to around 16 per day. But the statistics of the “mass- suicides” as stated above is lacking. Reports from India elaborate on three different forms of mass-suicides; Students, Farmers and Family-suicides, with huge statistical figures.

Poor scholastic performances, rising parental and peer-groups’ expectations, interpersonal relationship issues are some of the reasons behind students’ suicide. Reports from the Kota region of the Rajasthan state in India, where coaching classes are held for the highschool graduates for Medical/ Engineering Entrance preparations, are very tragic. Nineteen students committed suicide at that place on the same time, deeming the city notorious as the ‘suicide-city’.

Farmers’ suicide is another growing issues getting the media attention during the election period in India. Economic adversity: huge debts, inadequate agricultural income, excessive dependence on rainfall, monetary compensation for the suicide victims’ family are considered some of the reasons for the farmers’ suicide. India, being a familial and closely bound, culturally and socio-politically comparable neighboring country; its influence will take no time to come to our country. Reports of family-suicides have already started pouring in our newsrooms.

Financial hardships: bankruptcy, indebtedness, over-ambitiousness, low frustration tolerance, health concerns, and relationship issues, are some of the reasons cited for family suicides. WHO states 78 per cent of the suicides are due to the economic reasons.

Mass suicides have been depicted many times in the World History; deaths of 900 persons in People’s Temple (Jonestown, 1970), Heaven’s Gate suicide in Canada, are some of the horrifying examples.

The instances of such mass-suicides are not uncommon in our Eastern/ Indian cultures as well. Self-sacrifices in the form of sati, jauhar and sanyasa-marana or moksha, are some examples. Also, suicide-bombing and pseudo-martyrdom are some forms of the mass-suicides which get religious and political approval, and labeled a form of altruism.

Regarding the family suicide as exemplified above, these are the self-induced deaths where the victims deem the situations to be extremely intolerable or they believe to have been in the real risks of death, defamation or shame, or consider substantial loss of love, care, faith, etc.

The mechanisms responsible for such tragic events cannot be understood or pin-pointed easily.

The role of contagiousness of suicidal behavior should really be discussed seriously in this era of rampant Wi-Fi, smart phones and social media. Suicidal thoughts may be transmitted from one victim to the other through social or interpersonal connections, directly or indirectly. Teenagers seem to be more vulnerable in this mechanism.

Another mechanism may be imitation; symbolic group activity may increase the possibility of the altruistic form of suicide as was seen earlier among the defeated soldiers and warriors. Sympathy towards suicide-victims may increase suggestibility to these acts. When there is lack of social integration or regulation and when the interest of a group dominates that of an individual, suicidal behavior can transpire in the whole group. Such suicidal behaviors are also termed as cluster suicides. It may be the mass cluster when many people commit suicide in a particular time frame. When such suicides happen in the institutional settings like schools, hospitals or prisons, it is called point cluster. We must not let these incidents to happen again and again. But, how do we prevent this?

The only way is “talk, talk, talk”. Identifying and talking to the vulnerable helps screen high-risk individuals is considered most important measure. Post-care after suicide attempts aiming to prevent contagion may be an effective way to deal with the attempters and prevent mass-casualties. Case management services can be enforced at the schools and Universities to prevent point-cluster suicides. Screening for psychiatric illnesses like depression needs to be undertaken by the mental-health workers and public health researchers. The vulnerable individuals or attempters need encouragement to share information with their friends and family members. We, psychiatrists, should work to address the symptoms of distress and treat the mental illnesses.

Culture itself can be an effective medium to prevent suicides; guidance from the elders for grief- resolution and crisis-intervention is very helpful. Shreemad-Bhagwadgeeta can be of real support, in my opinion. Role of media cannot be underestimated considering the issues of ‘contagiousness’ and ‘copycat phenomenon’ explained above.

Risal is at Dhulikhel Hospital, KU

*The original image has been replaced respecting readers’ feedback on sensitivity of the depiction.

A version of this article appears in print on January 23, 2020 of The Himalayan Times.