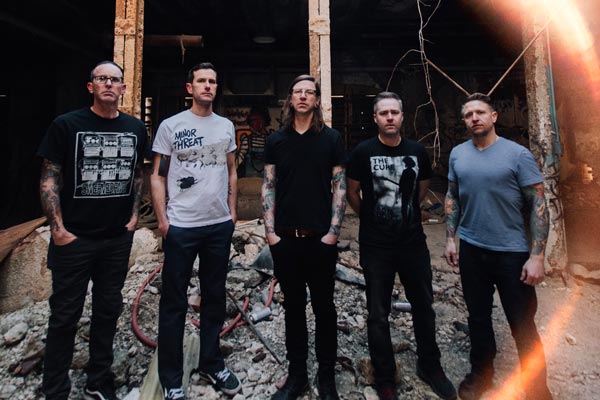 The Beautiful Mistake have released a new single entitled "Memento Mori" from the upcoming 5 song EP “You’re Not Broken. I Am” which will be released on March 27th via Wiretap Records (US) and Disconnect Disconnect Records (UK/EU).

Formed in 2000, The Beautiful Mistake are back after a long hiatus, ready to release brand new music. The band released two full-length albums: the 2002 debut album, 'Light A Match, For I Deserve To Burn', and 2004's 'This Is Who You Are' on The Militia Group. They also released two EPs and had various songs featured on different compilation albums.

Formed by Josh Hagquist, Shawn Grover, Josh Quesada, and Steve Dunlap following the breakup of their previous band, Ember, the band went through numerous member changes with Hagquist (vocals–guitar) remaining the constant in each incarnation of the band. The Beautiful Mistake released albums on SideCho Records, The Militia Group and Reignition Records and had songs and videos featured on Victory Records and Hopeless Records.

The band toured with numerous hardcore, punk and rock bands including Further Seems Forever, Brand New, Hopesfall, Elliott, Funeral For A Friend, As Cities Burn, Fall Out Boy, Senses Fail, Moneen, Every Time I Die, Open Hand, Glasseater, Brandtson, Anberlin, The Myriad, Copeland, and Emery to name a few. They were also able to share the stage with bands like Snapcase, Shelter, Common Rider, Underoath, Atreyu, Avenged Sevenfold, and Boysetsfire during their extensive touring of the U.S. They also had songs featured on numerous television shows on Mtv, Vh1 and the WB network.

The Beautiful Mistake played its last full-band show at Purple Door fest in Pennsylvania in 2005 before quietly going silent. In 2018, The Beautiful Mistake (Josh Hagquist, Shawn Grover, Jon Berndtson, Josh Quesada) announced they would play two reunion shows in Southern California in late March. The first show was at Chain Reaction in Anaheim, and the second was at Brick By Brick in San Diego. That reunion in many ways helped inspire new music. Now a 5-piece, with original guitar player Steve Dunlap rejoining, the band entered the studio in mid 2019 to record 5-songs with Beau Burchell (Saosin). The result, a brand new 5 song EP “You’re Not Broken. I Am,” due out March 27th via SoCal based label Wiretap Records and in the UK/EU Disconnect Disconnect Records.

“Memento Mori “ is the first song off the new EP, which picks up right where the band left off delivering their signature equal parts melody with screaming. The band is set to perform on the 20 year anniversary of Furnace Fest in Birmingham, AL featuring Further Seems Forever, BoySetsFire, From Autumn to Ashes, Converge, Cave In, The Beautiful Mistake, Mineral, Hot Water Music, Hopesfall, Zao, Norma Jean, Shai Halud and more.

"Memento Mori doesn’t just keep up the band’s sterling legacy, it also seems to prove why 2020 was the year The Beautiful Mistake came back. The track is powerful, with crashing riffs and a big, singalong chorus, and yet it maintains a sense of vulnerable realness that doesn’t make it feel too dreamy or saccharine. This isn’t a throwback emo track, it’s an anthem for kids right now who are dealing with elevated suicide rates and cultural exhaustion, but who are slowly finding their way out of the cave."-- Kerrang!