Hessians storm Colonel Rawling’s Redoubt of Maryland & Virginia Riflemen and three cannon. Margaret Corbin, who manned a cannon after her husband was killed, is featured in Don Troiani’s painting of the Battle of Fort Washington. http://www.revolutionarywarjournal.com/margaret-corbin-two-years-before-molly-pitcher-captain-molly-...

She’s the only woman veteran honored with a monument at West Point. But where was she buried? 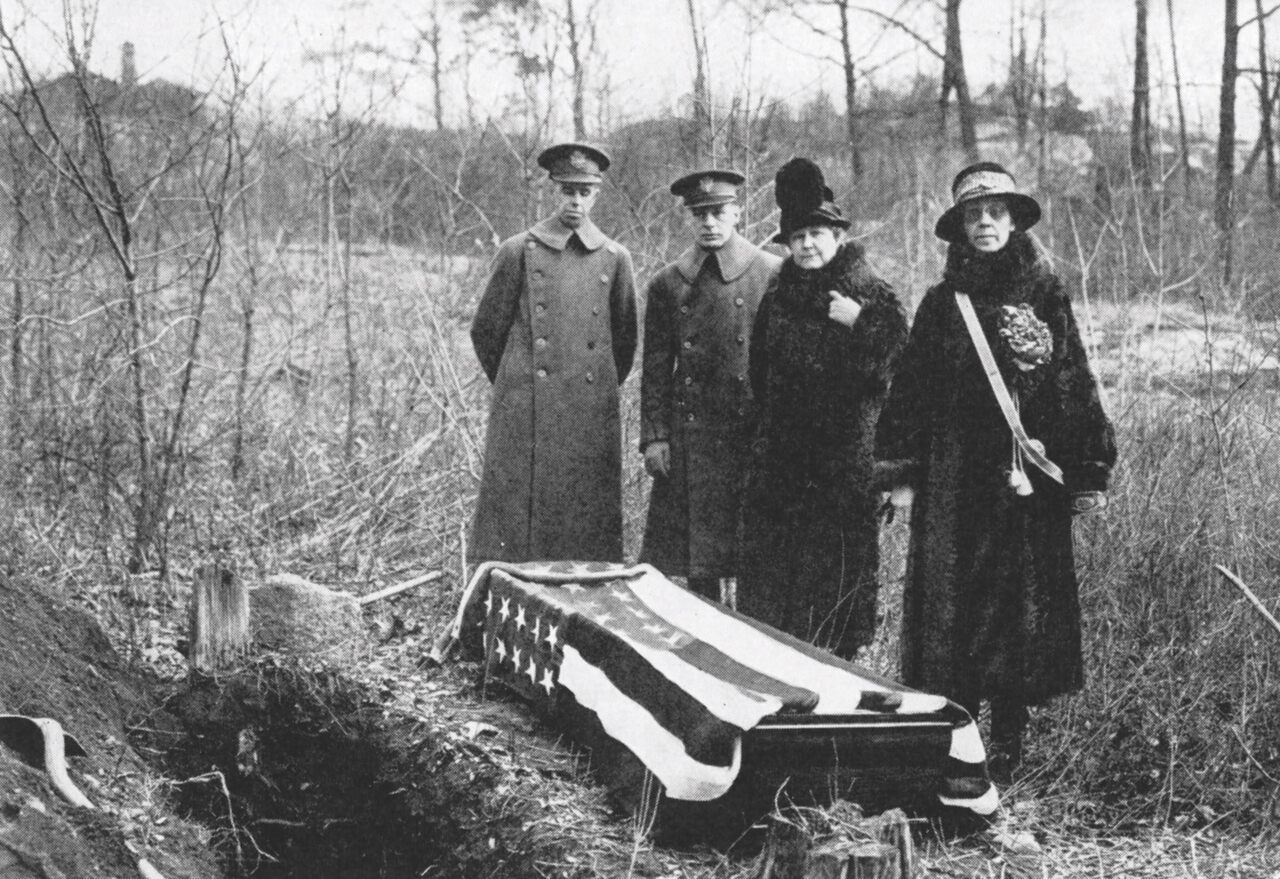 In 1926, the Daughters of the American Revolution joined forces with the U.S. Military Academy to exhume the supposed burial site of Margaret Corbin. DAUGHTERS OF THE AMERICAN REVOLUTION


IN 2016, FIVE DAYS AFTER Thanksgiving, Margaret Corbin’s grave was dug up for the second time since her death in 1800. It began by accident. Contractors were working on a retaining wall near the West Point Cemetery, at the U.S. Military Academy, when a hydraulic excavator got too close and chewed through the grave.

As soon as they noticed bones spilling from the soil, they alerted the military police. The plot was quickly cordoned off, her monument was wrapped in tarp, and rumors started to spread about Corbin’s resting place—that is, if it even was her resting place. When forensic archaeologists arrived at the scene, they were perplexed: The bones seemed oddly large.

The monument to Margaret Corbin is West Point’s only monument to a woman veteran, and it greets visitors near the main gate, just feet from a neoclassical chapel. It faces Washington Road, where the Academy’s top brass live, and depicts Corbin in a long dress, operating a cannon as her long hair and cape fly in the wind. She wears a powder horn and holds a rammer to load cannonballs; the rest of the rather cramped cemetery sprawls out behind her. The monument portrays the moments before Corbin became a prisoner of war. 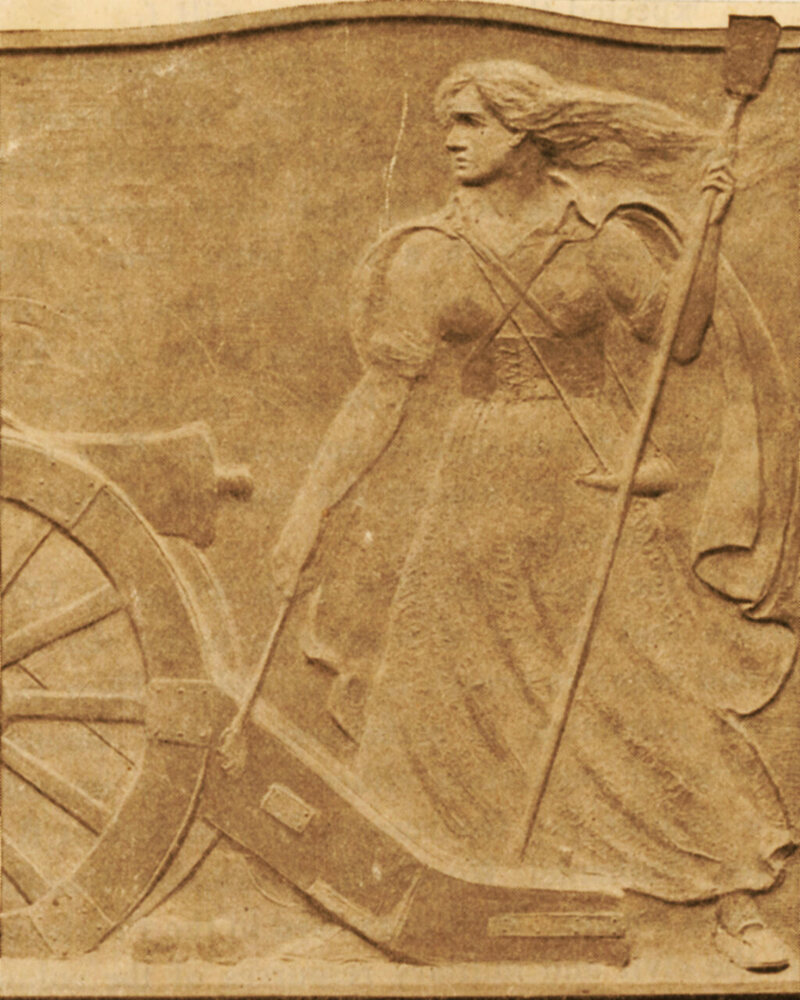 The story goes that Corbin joined her husband, John, to fight in the American Revolution. At the time, many women followed their husbands to war, where they were commonly known as “camp followers.” Typically, they foraged for food, cooked, and did laundry. Before Martha Washington was the United States’ first first lady, she was also a camp follower. In fact, she and Margaret were with the same company—though the two experienced different lives, since George was a general, and John manned a cannon.

At the Battle of Fort Washington, on November 16, 1776, in what is now Washington Heights, the British and Hessians advanced far enough to make the Continental Army’s position untenable. George Washington retreated with his forces to White Plains; John Corbin was shot dead at his cannon. But Margaret was there to jump into John’s position and help fire the cannon. During the battle, her jaw and shoulder were seriously injured, and grapeshot tore off part of her breast. Despite the Continental Army’s efforts, the fort was soon surrendered, and Corbin was captured along with approximately 2,837 soldiers. 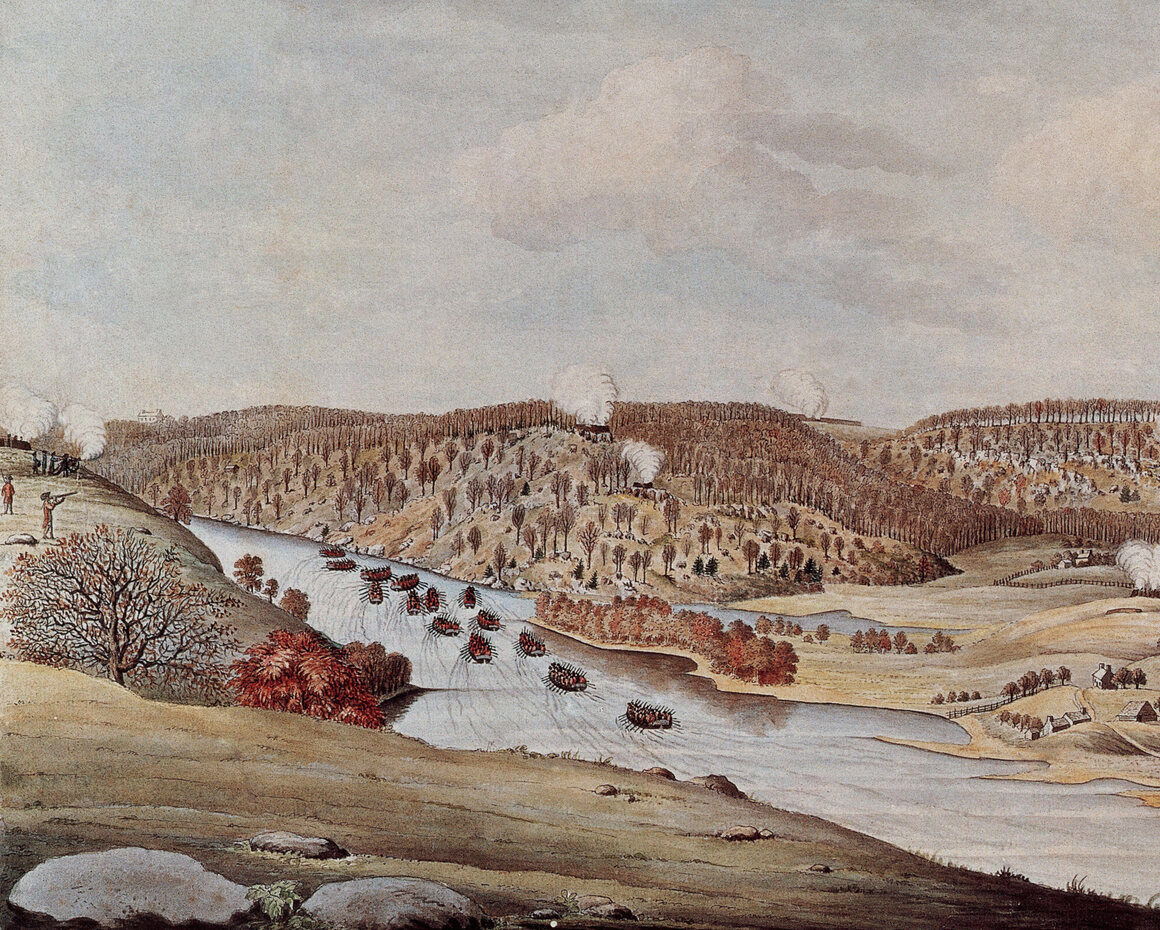 The British may have been unsure what to do with an injured woman, because she was released fairly soon after the battle. The ordeal was one of many traumas in her life: According to records collected by the historian Stella Bailey, Margaret was only five years old when her father was killed in a conflict with Native Americans in Pennsylvania, where they lived. Her mother was kidnapped, and Margaret and her brother moved in with an uncle. They never saw her again.

After Corbin’s return, she joined the Corps of Invalids, a group of wounded soldiers that were still able to contribute to the war effort. They were stationed at West Point, New York, where Corbin became known as a cantankerous woman who had a tough time making a home for herself in the neighboring village of Highland Falls. She moved between various local families who tried to care for her. Having witnessed her husband’s death and sustaining wounds, she was probably in constant mental and physical pain.

WHEN MARGARET CORBIN DIED IN 1800, she was buried in a pauper’s cemetery in Highland Falls, just three miles from West Point. But in 1926, the national society of women known as the Daughters of the American Revolution saw to it that Corbin would earn her vaunted cemetery plot. The society, which is made up of women who can trace their lineage to participants in the American Revolution, was celebrating the sesquicentennial of American independence, and saw Corbin as the consummate symbol of both their organization and the Revolution. A year-long effort convinced the U.S. Military Academy to help them exhume and transport the remains to the prestigious cemetery, to be reburied with a military funeral. 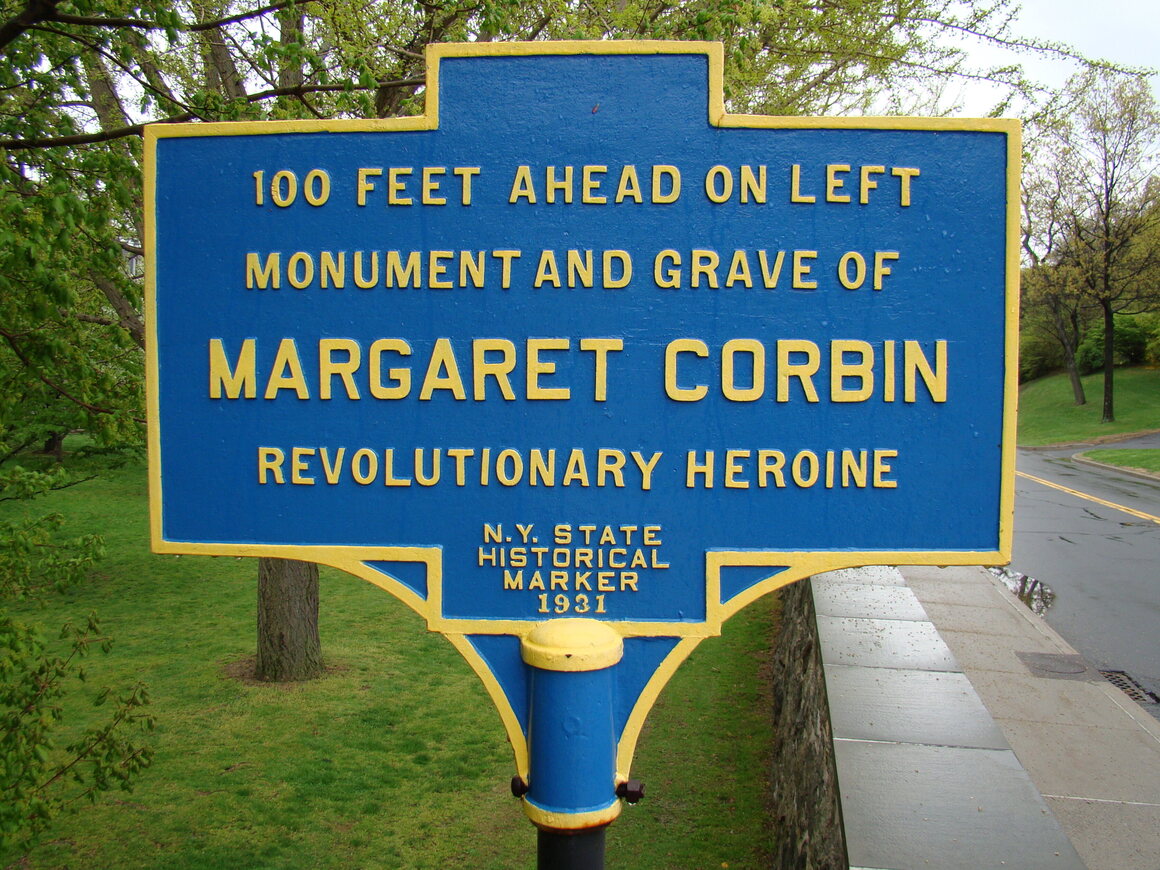 Exhumation was not a simple task: By the time the DAR began their campaign to move Corbin, the location of her exact burial was known only by word-of-mouth, passed down through generations. In collaboration with West Point, the Daughters found the great-grandson of the man who supposedly dug Corbin’s original grave, a steamboat captain by the name of Farout. Her burial site was apparently marked by the stump of a cedar tree; during the exhumation process, the gravedigger accidentally drove the shovel through the skull. Still, the Army Surgeon reported injuries to the skeleton that were consistent with grapeshot. The remains were given a new, flag-draped casket and delivered to West Point by horse-drawn hearse.

Every year since then, the Daughters have gathered at Corbin’s monument for Margaret Corbin Day. On the first Tuesday of May, the Daughters fill the chapel, share Corbin’s story, sing hymns, and stand at the grave while soldiers perform a 21-gun salute. 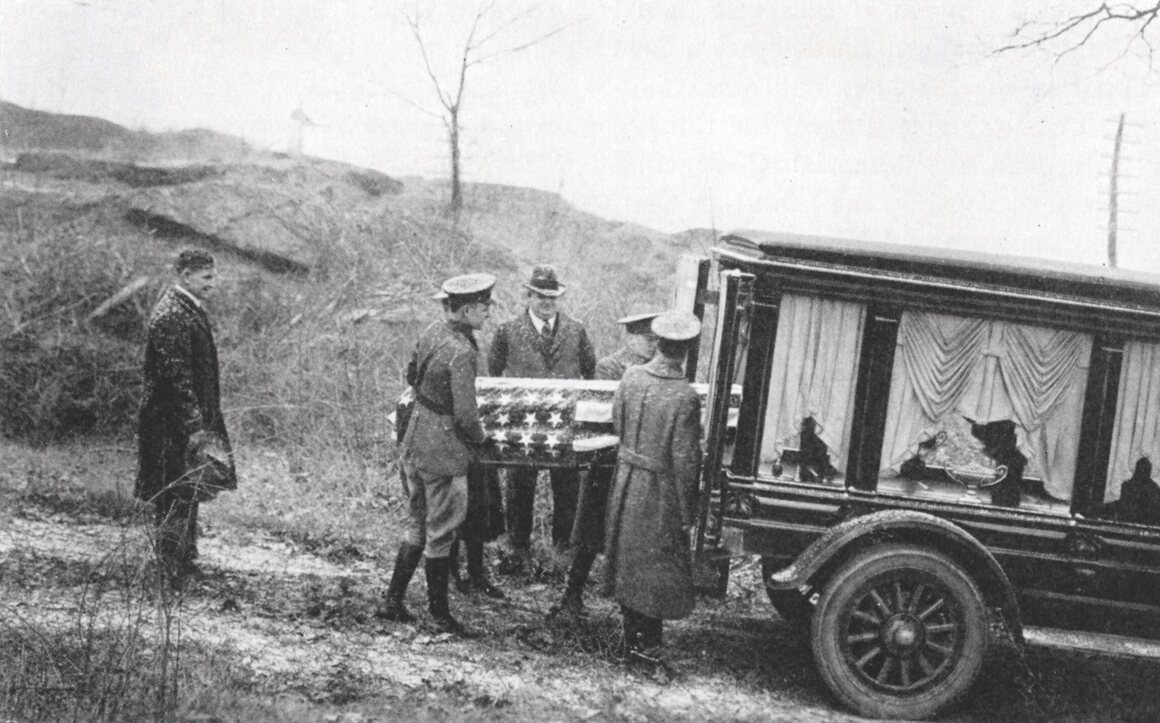 After the U.S. Military Academy unintentionally reopened the grave beneath Corbin’s monument in 2016, they decided to conduct an emergency forensic archaeological excavation. They enlisted the help of Elizabeth A. DiGangi, an anthropology professor at Binghamton University, and Michael K. Trimble, an archaeologist for the Army Corps of Engineers. Almost immediately, the pair noticed that the size of the bones didn’t match Corbin’s description. Corbin was reportedly a stout woman. “One of the first bones I saw when I was on site was the humerus, or upper arm bone,” DiGangi says. “It was very large, which is not what you would expect with an arm bone from a woman.”

DiGangi took the remains to her laboratory at Binghamton University to do a full analysis. Some worried that other remains were mixed up with Corbin’s. (In the past, West Point has discovered unknown remains when they’ve broken new ground for construction.) Ultimately, DiGangi’s analysis revealed something even more shocking: The remains in Corbin’s grave actually came from an adult male. DiGangi determined that it was a large man, who could’ve been anywhere from five-foot-seven to six and a half feet tall. The remains of Margaret Corbin were not in Margaret Corbin’s grave. 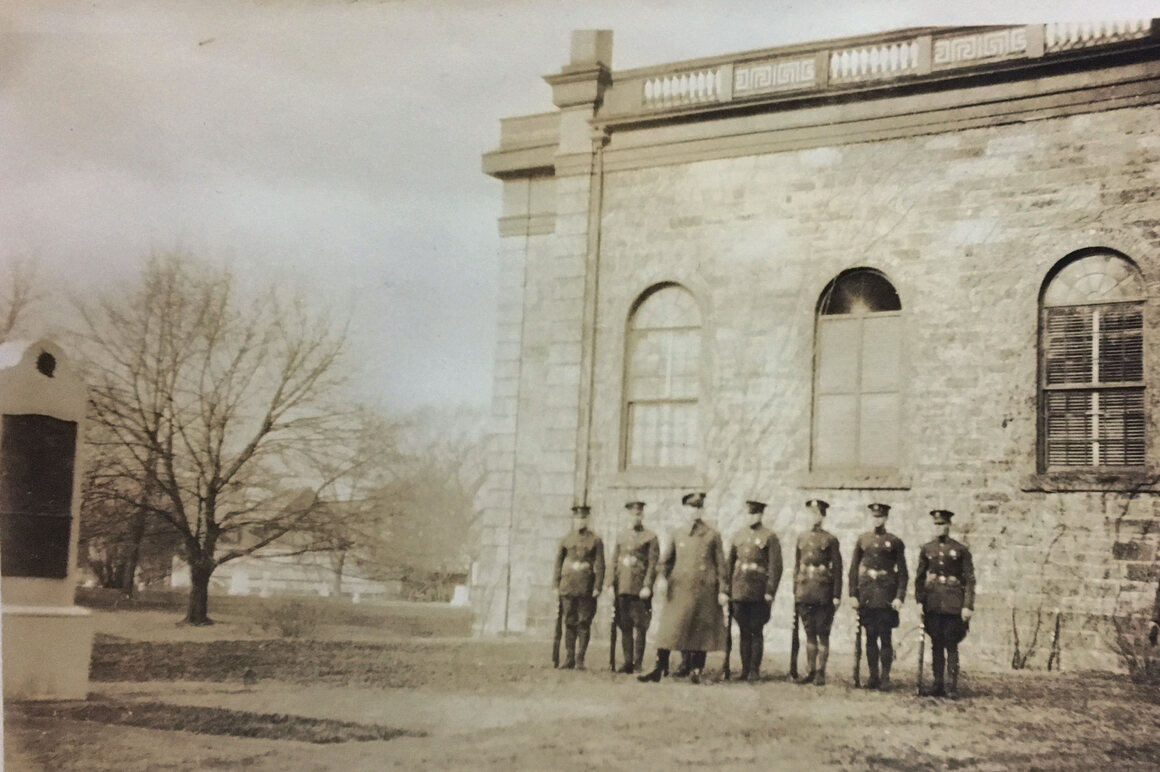 Once the archaeological excavation teams completed their reports, the Army National Cemeteries contacted the Daughters of the American Revolution. They wanted a meeting at DAR headquarters in Washington, DC.

Jennifer Minus, the head of the New York chapter of the DAR, was among those present at the meeting. Minus, a graduate of West Point and a former member of the Corbin Forum, a club for cadet women, knew her Corbin history better than most. She asked how it could’ve been a man in the grave, if in 1926 the Army surgeon said that grapeshot injuries were present. In her report, DiGangi explains that what the surgeon considered a grapeshot injury was, in fact, post-mortem damage to the remains.

So where is Margaret Corbin? Since the attempted reburial of Corbin’s remains, in 1926, her original gravesite in Highland Falls has been lost to time. Sometime in the 1970s, the town dropped a sewage plant where many believe it was once located. Yet Minus remains optimistic that Corbin’s remains will one day be found. As upsetting as it was to learn that her remains were missing, the Daughters also tried to see the discovery as an opportunity to spread Margaret’s story. It’s as though they picked up right where the 1926 DAR members left off. Minus formed an unofficial Margaret Corbin Task Force, drawing on the strengths of DAR members: One was a genealogist, and another was a Navy veteran who had worked on locating the remains of American soldiers overseas.

ON APRIL 30, 2019, MINUS combed the woods of Highland Falls, looking for the original gravesite. They tried to match up the old photographs with newer ones, but this proved difficult, because most of the trees in the photographs were saplings at the time. They looked for flat areas that would have been suitable for burials: It was common at the time to bury people in elevated areas, to avoid rising water tables that could push the caskets back up to the surface.

The next day, the Daughters gathered again around Corbin’s monument, dressed in large hats and sashes. The ground looked as though it had never been disturbed. A casual viewer would’ve never known that Corbin wasn’t under their feet. 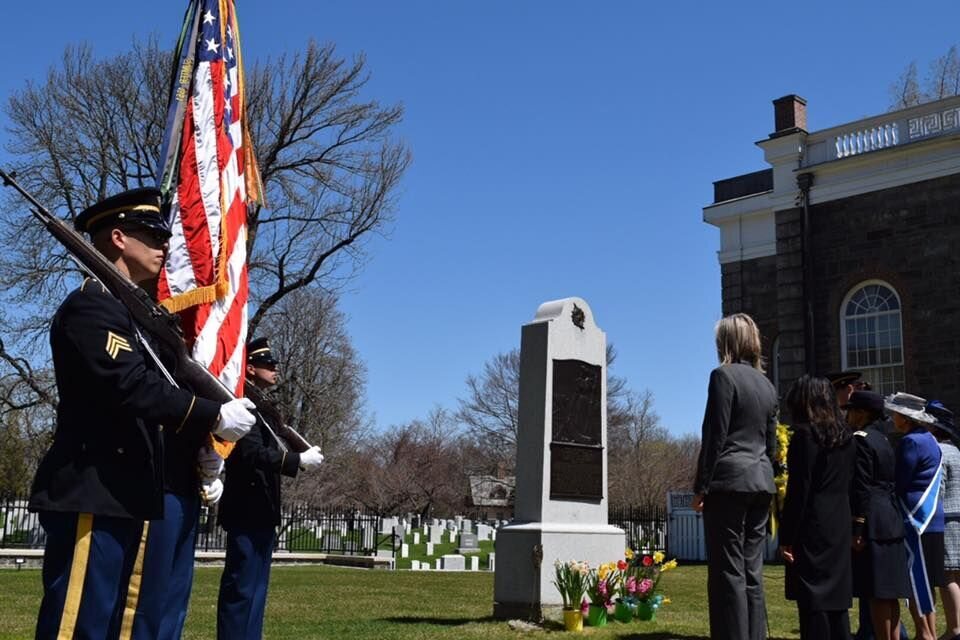 It was an important day for the Daughters, but especially for Minus, who joined the DAR in part because of Corbin. Once, before she graduated from West Point, she told her grandparents about a lunch honoring Margaret Corbin. Her grandmother told her that her heritage made her eligible to join the Daughters of the American Revolution, and a few years later, when she returned from a post in Germany, her grandma prepared the necessary papers.

Minus is hopeful that they’ll find Corbin near the river, not far from the grave that the Daughters dug up in 1926. “When they started digging, they found bones. So, they didn’t make, like, 10 different holes over a field. They got it on their first attempt and found bones. What I’m hoping is that they just had to do a 180, and she would’ve been five feet over.”

The man they found in Corbin’s grave has since come back to the West Point cemetery, to be reinterred with the other unidentified remains found in the area. No one yet knows who the man could be. Some theorize it’s Corbin’s second husband—but there’s no proof that she remarried. Others believe it was a Native American. It’s possible that the unknown man might be dug up a third time, should the proper clues demand his participation. Corbin’s original gravesite did not turn up in 2018, but the search continues.

On Corbin Day in 2019, after the 21-gun salute, the Daughters hold another luncheon. This time, the Margaret Corbin Task Force has something special on display: a machine that looks like a souped-up lawn mower. Many Daughters file into the room and ask what it is. “Just wait,” Minus answers. Then Lieutenant Colonel Mindy Kimball, an environmental science professor at West Point, holds a demonstration. It’s a ground-penetrating radar machine, which shoots electromagnetic waves into the ground and sends information back up to the antennae, to identify underground disturbances that could reveal human remains. 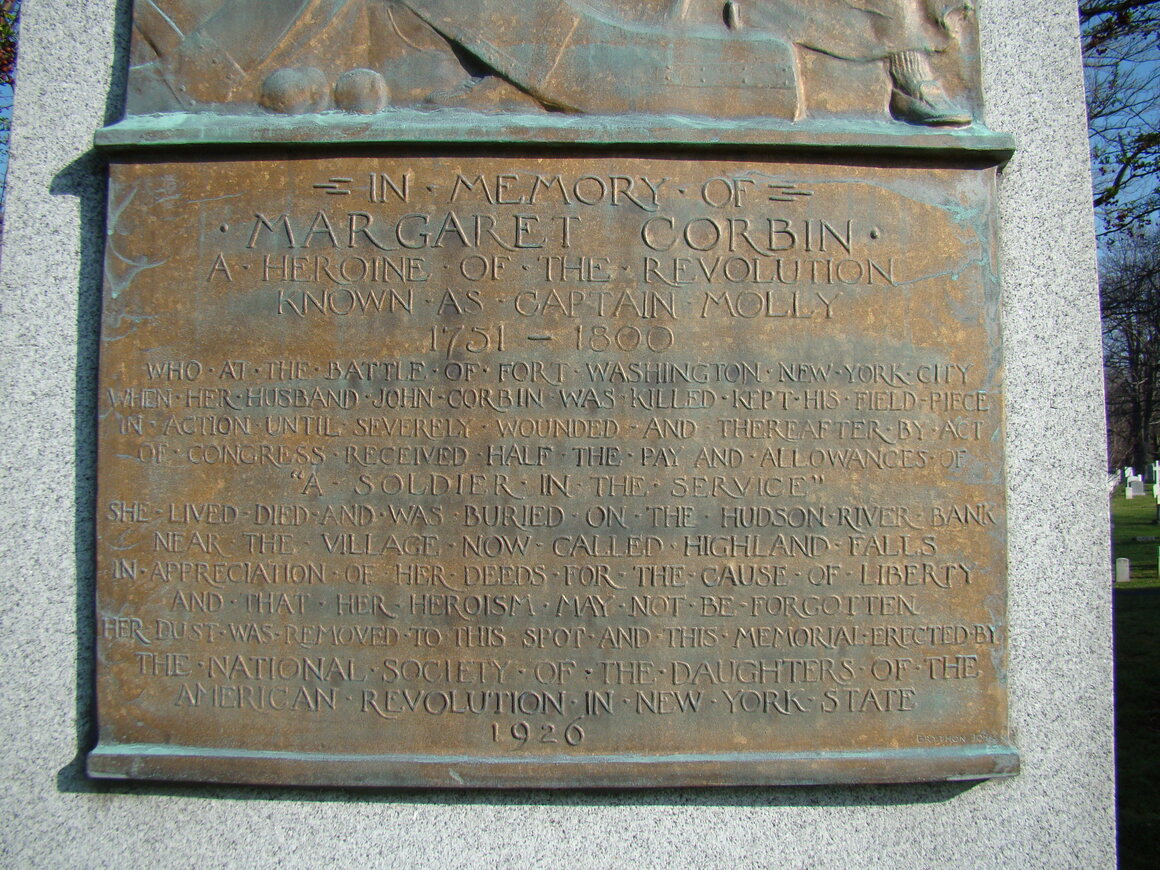 Stella Bailey, the town historian of Highland Falls, has been researching Margaret Corbin for decades. She’s pored over old maps, trying to pinpoint exactly where Corbin might have been buried in 1800. She even gets emails from people who think they might be related to Corbin.

Sitting in her office, overlooking Main Street in Highland Falls, Bailey sighs. “We know she was real. West Point’s records acknowledge her existence,” she says. But she can list discrepancies in Corbin’s story. Some say her husband was shot in the head; some say he was shot in the heart. Others say Corbin dressed as a man to fight in the war. Sometimes she wonders whether she will ever find answers. Perhaps these conflicting stories are just a part of Corbin’s mystique. “The more I research, the less I know,” Bailey says.