HARD Day of the Dead Completes Another Prosperous Edition 
HARD Day of the Dead wrapped up the festivities for Halloween and Dìa de Los Muertos and gifted attendees with one last night to celebrate.


Last Saturday, thousands of dance music lovers made the drive to Downtown Los Angeles to attend HARD Day of the Dead. Some individuals donned Halloween costumes, others wore traditional Dìa de Los Muertos outfits, but everyone came together under one sun to revel at grounds of the LA State Historic Park.

Speaking of LA State Historic Park: what an absolute treat it was to enjoy HARD DOTD with this venue choice. The sun dropped over the Downtown LA highrises to paint the sky an angelic orange-gold color. It was a visual mood-setter that engineered the engaging atmosphere that encompassed my experience. So many external factors like the weather and venue fell in line to generate a satisfactory affair for everyone.

From as early as clearing the gates of the grass-laden venue, one is treated to the sounds of music as the Duro Stage stood to the left inside. The stage was designed as a cathedral with a traditional painted skull on a centered stain glass window. The Duro stage paid homage to Dìa De Los Muertos holiday through its use of décor.

Along with the Duro Stage, HARD Day of the Dead featured other culturally significant decorations. In between the Duro and HARD stage, a colossal painted Calavera stood tall and proud, which became illuminated by black lights once night fell. Towards the entrance, a bright polychromatic graveyard stood upon a modest hill, that featured an eight-foot-tall traditional Catrina. Face painting was also offered for guests who wanted to partake in one of the traditions of the Mexican holiday.

Towards the east end of the festival, the HARD stage towered over the grounds. The HARD stage was a traditional outdoor truss structure, featuring one main LED screen in center stage. HARD spaced out the amenities and stages effectively to the point where no particular area ever felt cramped. 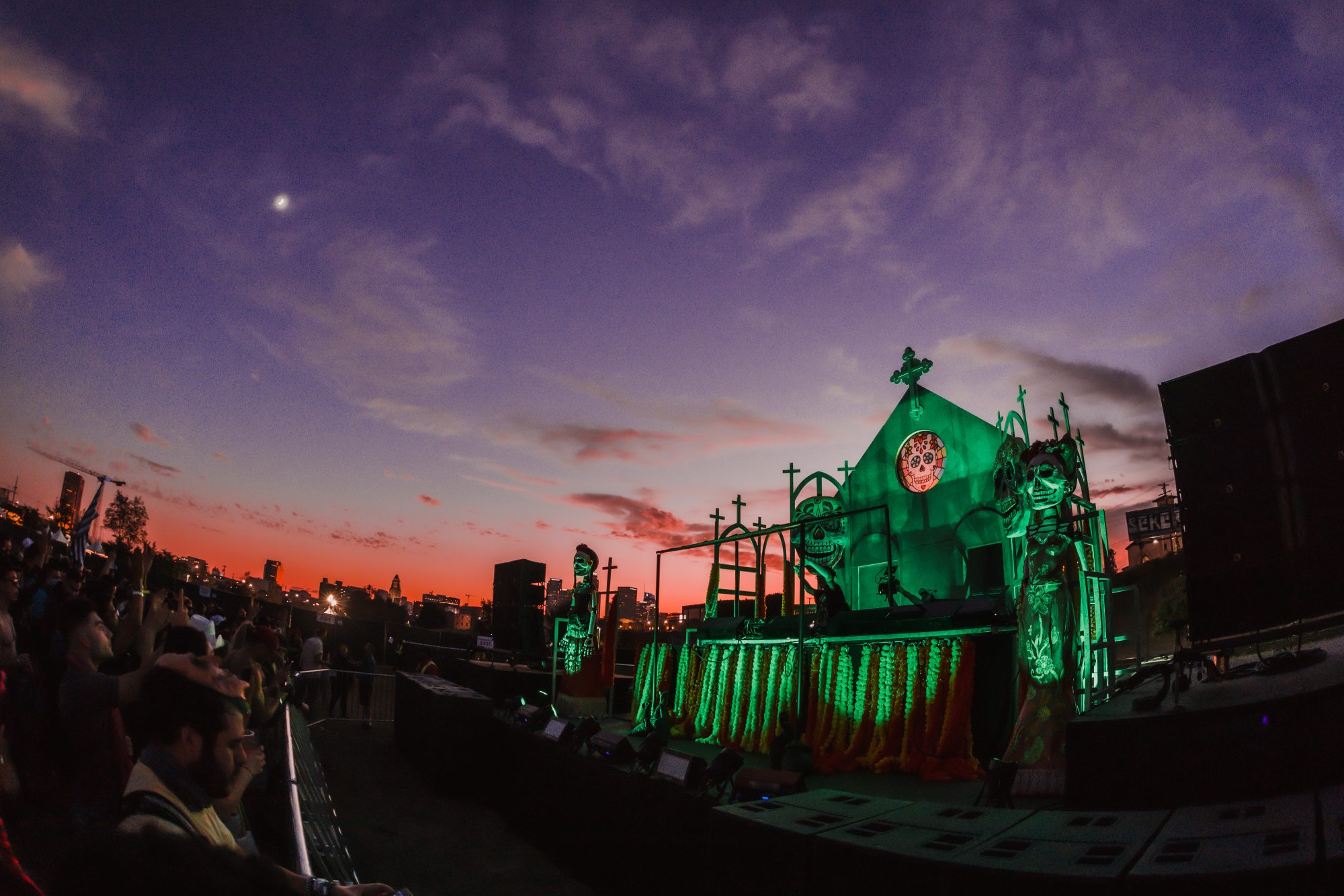 I started the day off catching 1788-L’s bass boosted set at sunset.

The first act I had the chance to see was 1788-L who stuck to his guns and played his signature glitch bass music. He dropped mostly his own tracks and mixed in popular tracks from other artists like k?d and ended his set by dropping his new monster track “Destiny” which is a collaboration with Blanke.

Elohim and TOKiMONSTA were both smash hits, exploring new musical territories with their extraordinarily innovative styles.

Following 1788-L, Elohim took command of the stage. She’s a seasoned live performer who sings, plays piano, and utilizes a launchpad to build her melodies. Her voice is stunning, and she drew up tons of crowd energy when she got on the mic to sing, especially when she played her collab with Louis The Child “Love is Alive”.

The sound design for Elohim’s originals are so unique and wondrous. I also enjoyed the way she layered her track’s lyrics onto the LED screen gave first-time listeners their own chance to sing along. The set was so sharp from start to finish that it is an absolute must-see for me in the future.

Next up to take the stage was TOKiMONSTA who invited the crowd along for the journey early on in the set.

Her set reflected exactly that as she exquisitely covered so many genres and styles into her hour set. TOKiMONSTA started off with some experimental trap before picking up the tempo for some sick house music towards the middle of the set. Towards the end, she picked up the bass and slammed down some filthy trap drops. Beyond just the genres, she mixed in some oldies rap and worked up some sensational mashups as well

It takes some masterful mixing skills to cover that much ground and do it in such an effortless fashion the way TOKiMONSTA did. For perspective, in the same one-hour set, she dropped tracks like “Lose My Mind” by Chris Lake, “Falls” by Odesza, “Thotiana” by Blueface, and “Era” by RL Grime, her set was truly a pleasure. 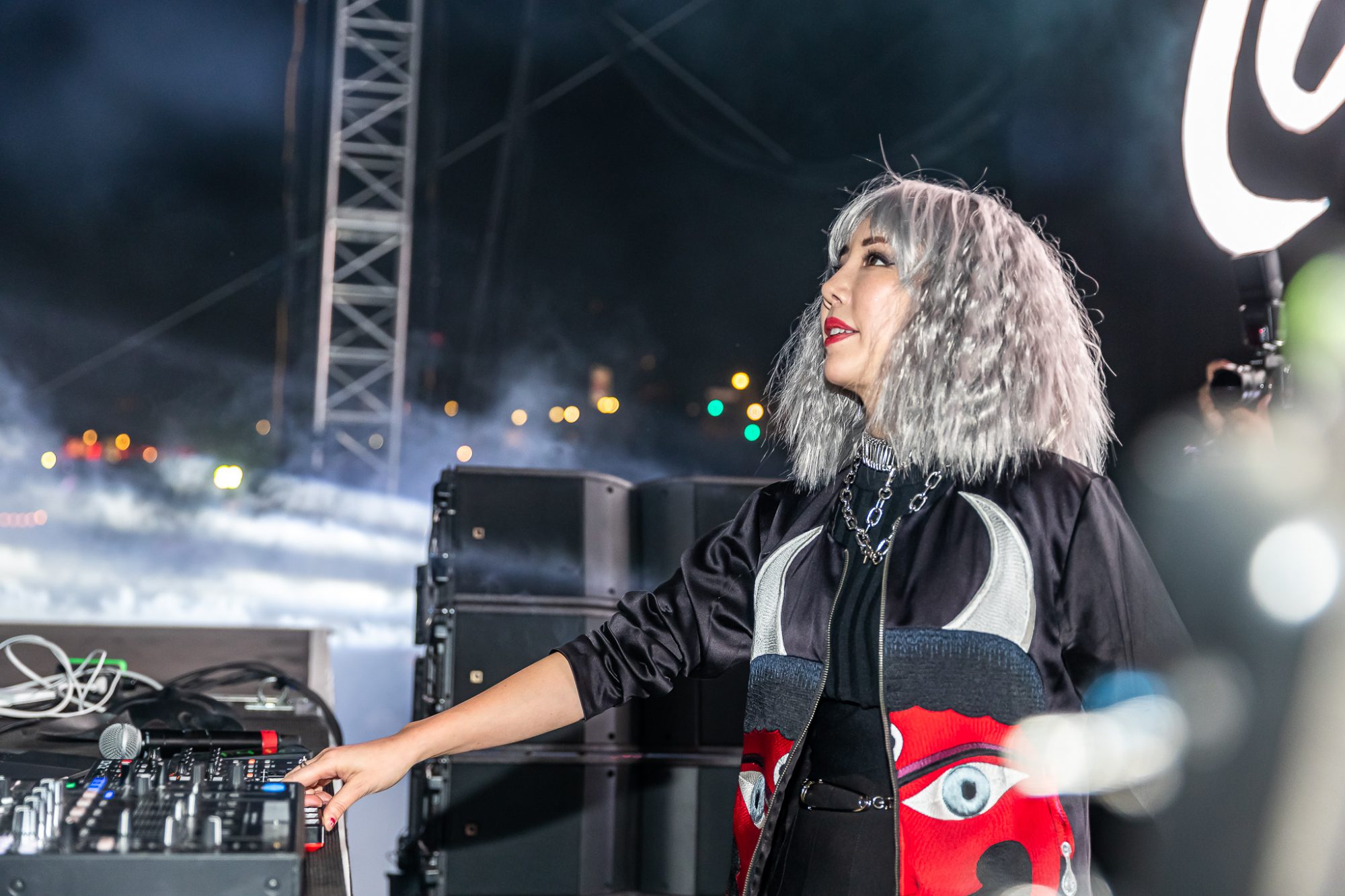 Following TOKiMONSTA, Blacklizt (ZHU) lifted the vibe of the HARD stage to a whole new level.

One detail I noticed coming into the festival grounds was the vast amount of fans donning ZHU merchandise. So, it came as no surprise when the crowd erupted with excitement once he took the stage for Blacklizt. It was not long before realized why: Blacklizt is supremely ethereal. To start, the stage set up with the mannequin fixtures on each side of the stage, a spotlight that silhouetted ZHU, and black-and-white visuals all combined to evoke a vogue and avant-garde mood.

In terms of music, ZHU played out sleek techno and progressive house beats throughout the Blacklizt set. Each track which built with intensity towards each soulful crescendo. The extended mixes that he layered the vocals of his popular tracks over were on point as well. The whole concept is highly developed and creates its own atmosphere through the superbly beautiful music and upscale ambiance to make for a memorable experience.

To end the night, Dog Blood headlined the HARD stage spun a set rich in their signature dark and distorted style.

Dog Blood has the complete arsenal to execute an elite show. You have two highly accomplished artists, Skrillex and Boys Noize, who bring quality track selection, high energy, and a unique sound that all comes together perfectly in a live setting. Their headlining slot at HARD Day of the Dead proved to be one of the best of the day as the duo as thrashed and gnawed through tracks and bootlegs.

Throughout their set, they mixed in every track from their recent EP Turn Off The Lights and even some of their older work like “Next Order.” They also dropped some fan-favorite Skrillex tracks like “AGEN WIDA” and “El Chapo” to add some extra flair. With the set nearing the end, they wrapped up the night’s festivities and finished with their new single “Midnight Hour“.

Skrillex said it best on the mic during the set, “Dog Blood came to see an LA show!” That show consisted of enthusiastic dance music fans from all walks assembling one dance floor to hear some of the best talents in the scene produce unforgettable sets.

HARD Day of the Dead threw the biggest Dia de Los Muertos Party in LA and gave fans a chance to celebrate and enjoy an impressive collection of acts.

Southern California has a rich music festival scene that brings a new show to the table on a seemingly endless basis, but HARD Day of the Dead sticks out as special to me. It not only brings amazing artists to the stage but also celebrates Dia de Los Muertos and captures the essence of that holiday.

Pair that with the setting of LA State Historic Park, the perfect home for an event of this magnitude with a stunning sunset over the downtown skyline, and the result is some serious magic. Here’s to another successful edition of HARD Day of the Dead in 2020, I’m already looking forward to what’s in store!