PURE EVIL. Horrific insight into the bloodthirsty world of the Nazis revealed in haunting unseen pics 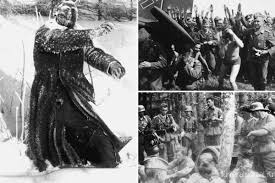 SHOCKING pictures show Nazi soldiers laughing and joking in the shadow of despicable war crimes during the Second World War.

The chilling photos are included in Paul Garson’s new book Photographers Of The Third Reich: Images From The Wehrmacht - a study into the personal and professional shots taken by Hitler’s army.

Garson has spent decades travelling the world amassing his collection of Nazi photography memorabilia and believes the images have a fascinating tale to tell.

He said: “Of the millions of German soldiers who went to war, many brought their personal cameras to chronicle their Dienstzeit, or military service, often via meticulously prepared photo albums, as individual ‘snapshots’ and as custom processed photo postcards sent to family and friends.

“No other group of combatants has documented a war in such quantities of images in an era before television, the video camera and satellite link-ups.

“The photos reflect upon the photo-takers, a mirrored view of a mindset clouded by a fatal arrogance, the eye of the beholder blinded by a cruel and rapacious ideology.”

Some of the photos include a German soldier in full uniform pulling a funny face against a window.

Another depicts two soldiers riding the back of a German rocket with the caption ‘strong boys on a flight to their darlings’.

The V-1 and V-2 rockets produced by Nazi scientists, which were programmed to drop indiscriminately on civilian populations caused untold misery in the UK, resulting in some 6,000 deaths and 50,000 injuries in London alone.

The photos reflect upon the photo-takers, a mirrored view of a mindset clouded by a fatal arrogance, the eye of the beholder blinded by a cruel and rapacious ideology. Paul Garson

Other photos are even more sinister.

A corpse, frozen in a grotesque manner in the depths of Russian winter, was captured on film by a passing German soldier.

Another image shows a crowd of Russian POWs being marched naked to almost certain death.

Many of these photos would eventually serve as evidence of the Third Reich’s crimes against humanity.

Photographers Of The Third Reich also contains information about the styles and varieties of cameras used by German soldiers and other picture producing technologies of the age.

For the Nazis, photography was just another weapon to be used in their pursuit of a master race.

Garson said: “Propaganda of all types was an integral part of any dictatorship and nowhere else was it more employed, developed and exercised than by Nazi Germany.

“The State called on a wealth of designers, artists and photographers to saturate the populace with ‘approved’ visual media both for Home Front consumption and for the international community.

“Under the leadership of Josef Goebbels, Reichsminister of Propaganda as well as controller of the Third Reich film industry, no effort was spared to sear Nazi ideology into the minds of every civilian, and that included documenting the exploits of the various military branches.

“Most of the original photographs seen in the following were taken by German amateur cameramen and camerawomen, others commercially reproduced via the vast propaganda machine that in great part foisted the impression of the invincibility of Nazi Germany.

"For twelve years, the light went out of the world, and it took millions of hands to bring us all out of the darkness.

"Many of those hands held weapons and pressed triggers, but many also pressed the shutter buttons of their cameras to record a moment in their lives that happened to have been part and parcel of the Third Reich.”

Paul Garson’s Photographers Of The Third Reich: Images From The Wehrmacht, published by Amberley, is due for release on 15 July.