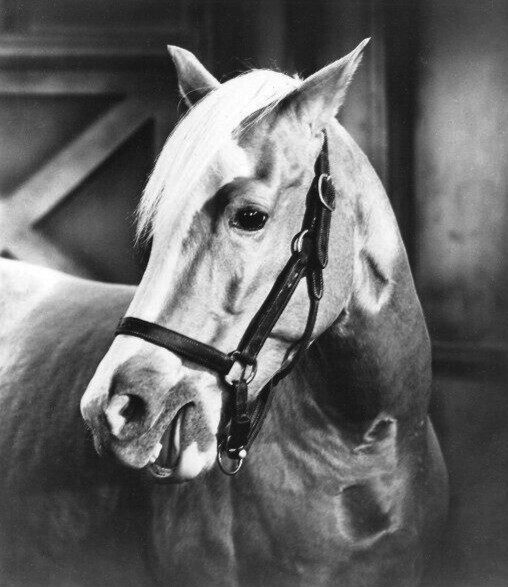 The granite monument is engraved with the image of the talking horse's head coming through a barn door.

Beneath a grave marker decorated with the logo of the classic television show Mister Ed, in Tahlequah, Oklahoma, a horse who portrayed the title character rests peacefully. But which horse?

Most visitors and locals believe the horse in the grave is Bamboo Harvester, the palomino horse, born in 1949, who played Mister Ed on television between 1961 and 1966, then retired to the Oklahoma farm where the five-foot granite marker now stands. He reportedly became sick in 1968 and was euthanized before being laid to rest near a cherry tree in 1970.

But Alan Young, who played Wilbur Post, the only person to whom Mister Ed would speak on the show, says that Harvester actually died accidentally following a shot of tranquilizer in California and was cremated, his ashes spread around by his trainer, Lester Hilton. Young says the horse buried in Oklahoma was a different palomino horse named Pumpkin, who died in 1979. Pumpkin was used for publicity shots for the show, and took up the mantle of Mister Ed after Harvester died, but never played the role on television. A third story has Harvester dying in California and being buried in Oklahoma.

Fans are devoted to the marker on the farm in Tahlequah regardless of which horse is buried there. The gravestone was marked by a simple wooden cross and a horse shoe until 1990, when a special stone was engraved for Mister Ed, complete with the image of his head sticking out through a barn door. There was a ceremony for its arrival that included a color guard and carrot bouquets.

The marker is engraved cautiously: “According to media reports, Mr. Ed moved to Oklahoma in the late 1960s, after a successful Hollywood career. Mr. Ed continued to entertain and bring joy to many Oklahomans, finally retiring in this very field. May his memory live long.”

The farm has had a few different owners since Mister Ed’s burial, most of whom have been accepting of the tourist traffic their property receives. Currently, the stone is still standing and is well tended by the owner. Still, this is private property so be sure to get permission from the homeowners before visiting, and be respectful.

The property sits right in an awkward curve of Highway 82 just north of Tahlequah, OK. It is easy to miss if you aren't looking for it. Look for the GPS coordinates on the map before setting out and you should have no problems.