Car with role on 'Portlandia' TV show now back in front of haunted store downtown.

Every October, a 1989 Cadillac high-roof Superior hearse named Hursula comes out of her hibernation from behind fenced sleep and begins to roam Oregon streets in search of haunts and ghoulish stores. 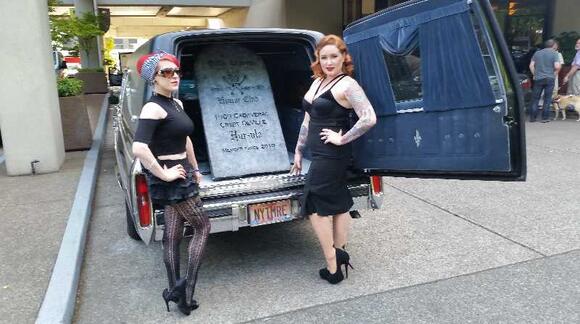 Geil and Smotrys acquired Hursula in 2010, just thinking of Hursula as an attention-getting ride to go to the annual Portland Auto Swap Meet. However, after the hearse graduated to the End of the World Hot Rod Show in Long Beach, Washington, the organizers of a car show in Seaside requested her owners bring Hursula to the Oregon Coast.

In Seaside, Hursula didn't seem to fit in with the hot rods and other show vehicles, so her owners parked on a side street. Ironically, at that time, there was a convention of funeral directors who rushed out to have photos taken with Hursula. Unknowingly, the car show organizers had parked Hursula below a "Dead End" sign. Soon, funeral directors and car show attendees were flocking around Hursula to have their photos taken.

Hursula may not be considered a "show" car, Geil and Smotrys say, but she attracts attention and various opinions. Most younger kids have no idea what a hearse is, while younger adults can be inquisitive because they've never been aware of such a vehicle unless it has carried a loved one to their final destination.

Geil and Smotrys sometimes have to remind people who are upset by Hursula that a hearse is simply a car, that no one died in a hearse, and hearses simply provide transportation to people's final resting location. While many senior citizens remember their high school days when hearses were used for bands, others are horrified that anyone would be using a hearse as a show and fun ride. They tell Geil and Smotrys that a hearse is sort of a religious icon and should be reverded as such. 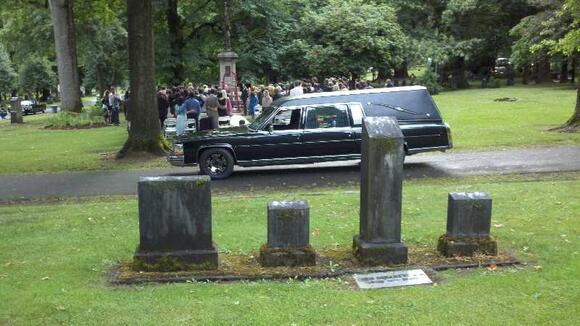 Hursula has joined the Portland Coffin Cruisers, a club of retired hearse owners, to attend haunted attractions around the local area. Occasionally she would get special invitations to attend special Halloween parties where the homeowners had gone all out in decorating their front lawns and homes. She attended a party in Portland's Alameda district that had a live Elvis impersonator entertaining a long line of children and parents that stretched around the block. 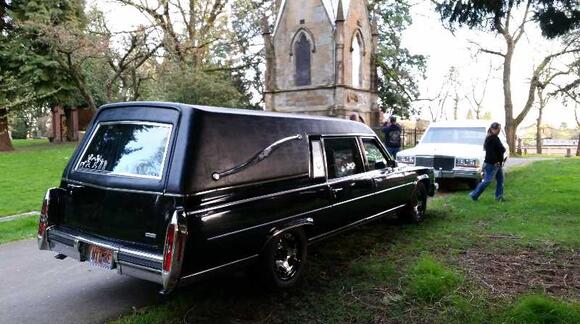 Hursula retains her original classic look while her fellow Coffin Cruisers club members rough up the paint, glue skulls to their sides, and even stretch their vehicles to provide rumble seats for their traveling skeletons. Hursula's only additions include Punisher Skull head tire wheels, a few fun logos in the back windows and a special license plate. Smotrys and Geil had a list of about 40 possibilities when they approached the DMV for the vanity plate; their choice "Nyt-Mre" gets a lot of questioning looks.

Hursula now resides outside the Ghoul Gallery, 619 Main St., in downtown Oregon City during the weekends in October. Just inside the door of the eight-year-old store offering gothic, steampunk and Halloween collectibles are photos of Hursula's turn at starring on the "Portlandia" TV show, where she would occasionally appear with the stars Fred Armisen and Carrie Brownstein of Saturday Night Live fame. She also has made occasional appearances at Rocky Smith's NW Ghost Tours Convention, where Geil emceed the event.

Hursula contains a casket, typically full of a large variety of scary T-shirts, which gets pulled out at car shows.

"They are just in the casket soaking up more colors," Smotrys said.

Geil maintains the Ghoul Gallery in downtown Oregon City, while Smotrys is Hursula's usual driver. He steps out of the car at events, in torn, soiled clothing with a shovel that he slams into the ground making the sounds that have given him the name of "Digger Dave." Smotrys likes to drive a skeleton-masked Geil around town, waving at unsuspecting onlookers.

The public, young and old, are invited to dress up as witches for a special event this month. Geil is planning a 2 p.m. Witches Flash Dance at Ghoul Gallery on Sunday Oct. 24, when the Portland Witches will lead a flash mob in singing a historic tune from Germany.