Главная страница
Библиотека
Статьи
Эстетика смерти
Символика смерти
Afraid of being buried alive? These coffins are for you. 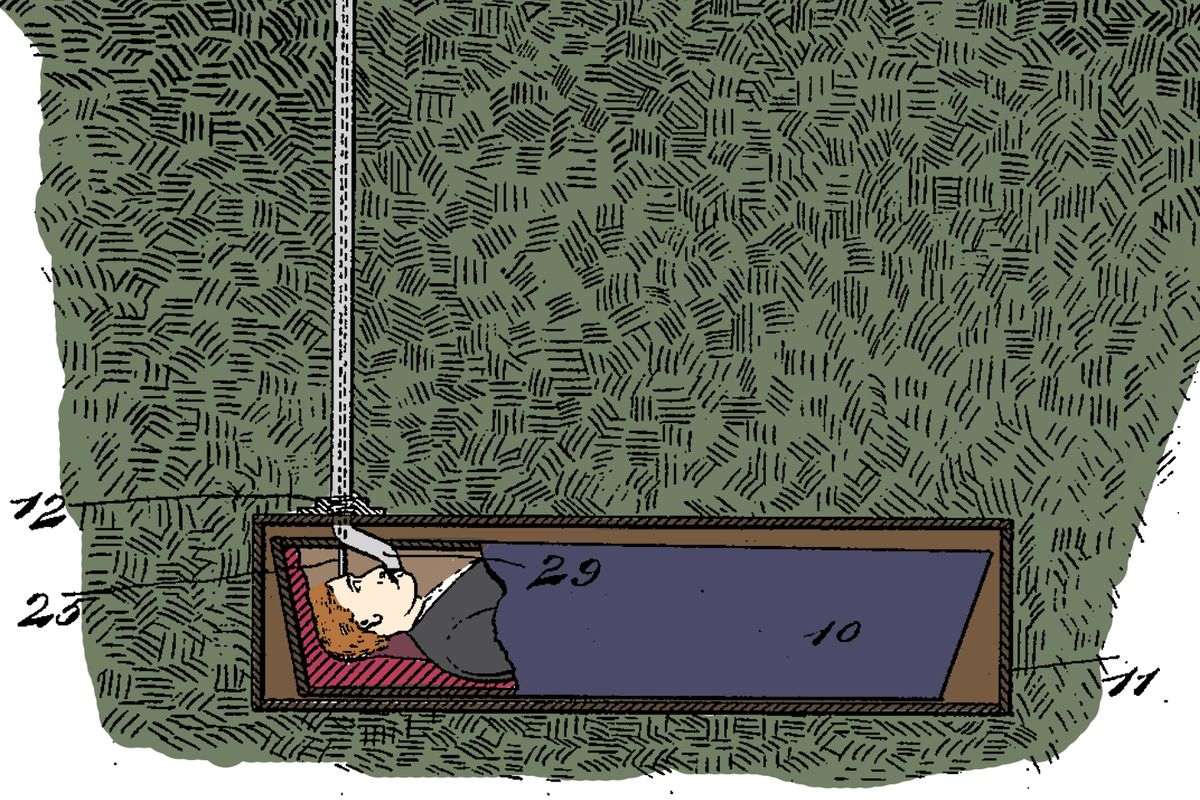 Get ready — only a super coffin can save you.  USPTO

It's called taphophobia — the fear of being buried alive. If you have it, you might want to invest in one of these coffins.

As Jan Bondeson writes in Buried Alive: The Terrifying History of Our Most Primal Fear, the fear has been around for centuries — and hundreds of people were listed as having been buried alive in the 1800s. That's what makes these so-called "safety coffins" so strange and yet, somehow, oddly compelling.

We've added a vivifying dollop of color to these patents, but they're all real inventions. 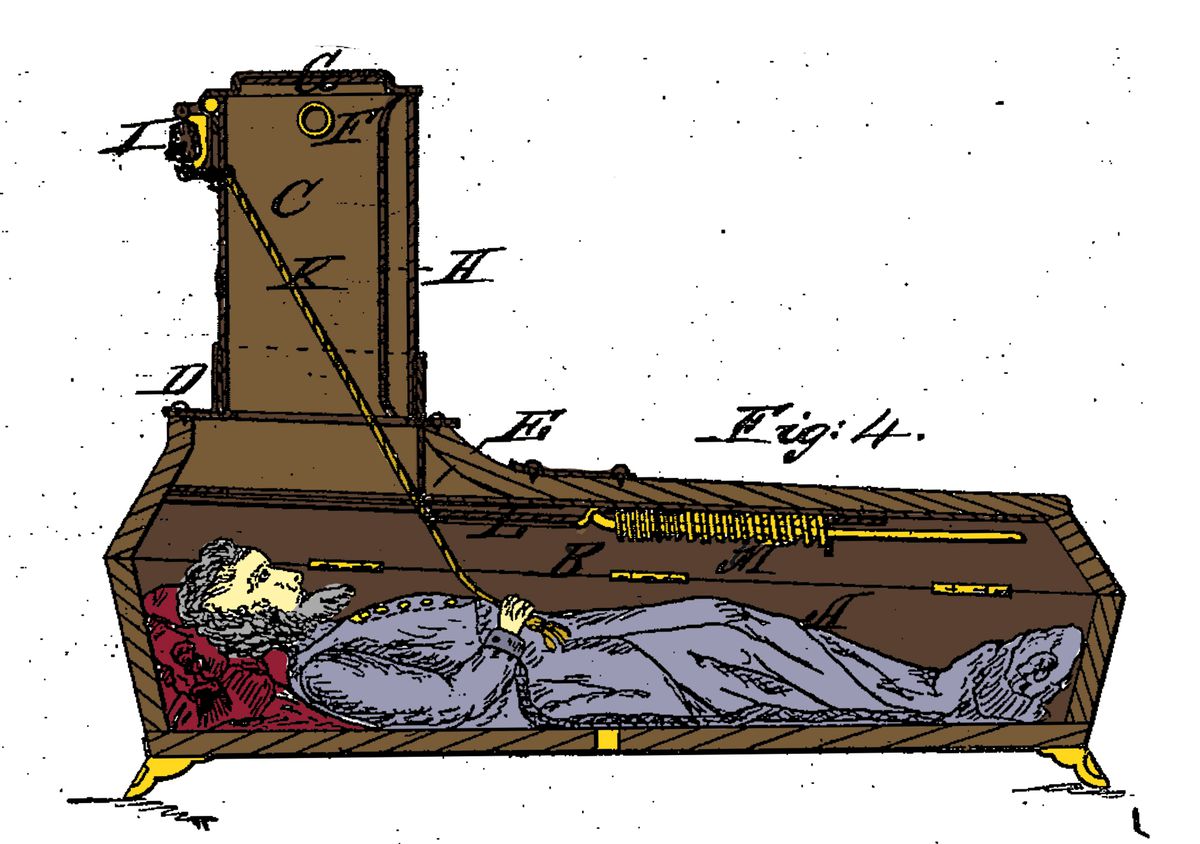 This 1868 patent is one of the earliest American coffin patents. The idea is that you'd only be buried up to the air holes. Then, should you pull on a lever, you could either ring a bell or simply lift the lid and use a ladder to climb out of your own accord. If you didn't for a week or so, then they'd finish burying you.

Basically, this one proposes that the best solution for being buried alive is to not really be buried at all.

2) Ring a bell, ring a bell for your sweet life 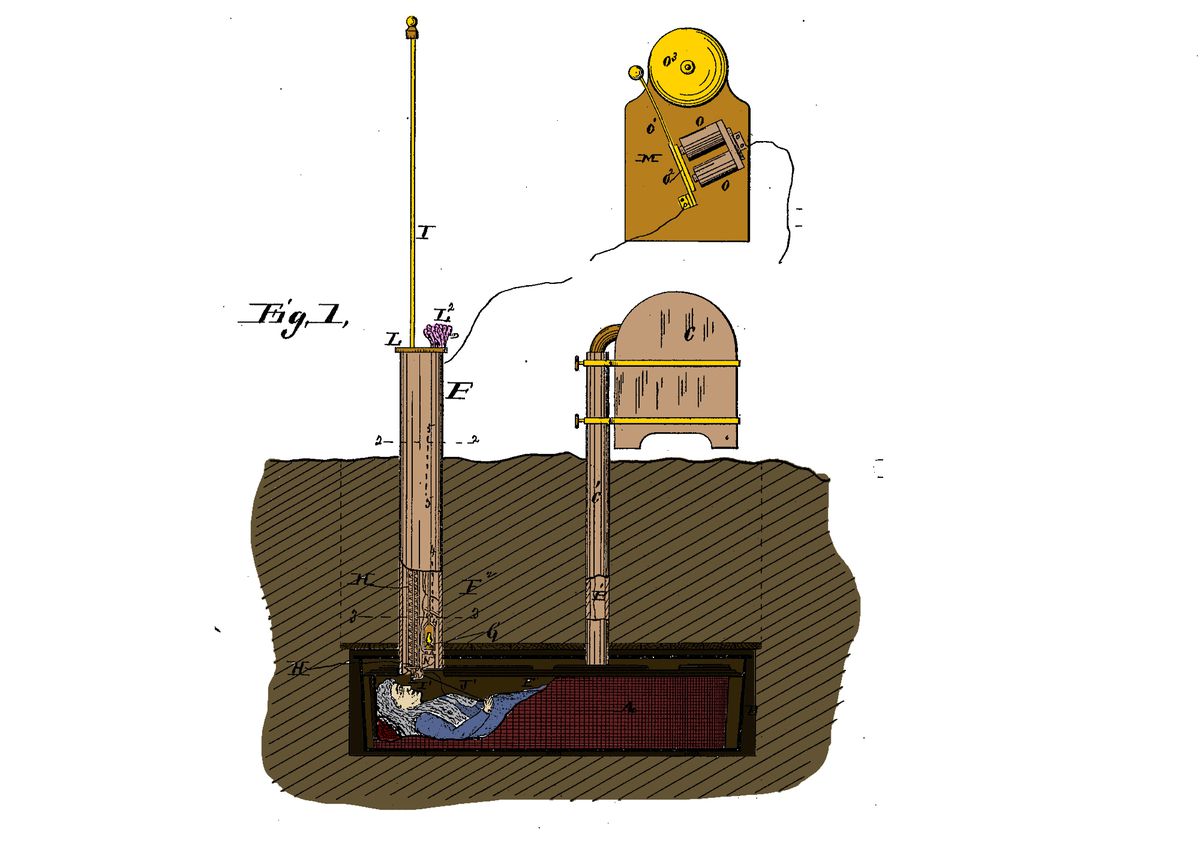 The 1885 device seen here claimed to provide new "life-guard signals for people buried in a trance." It seeks not only to notify the living, but to preserve the buried. A pulled string starts the flow of air into the coffin, so the buried person can breathe. Then, via a lamp lowered into a tube, people aboveground can peer into the coffin to see if somebody is alive or not. The person can also send out a signal they're alive, by animating some feathers or ringing a bell.

3) Signal with your mouth 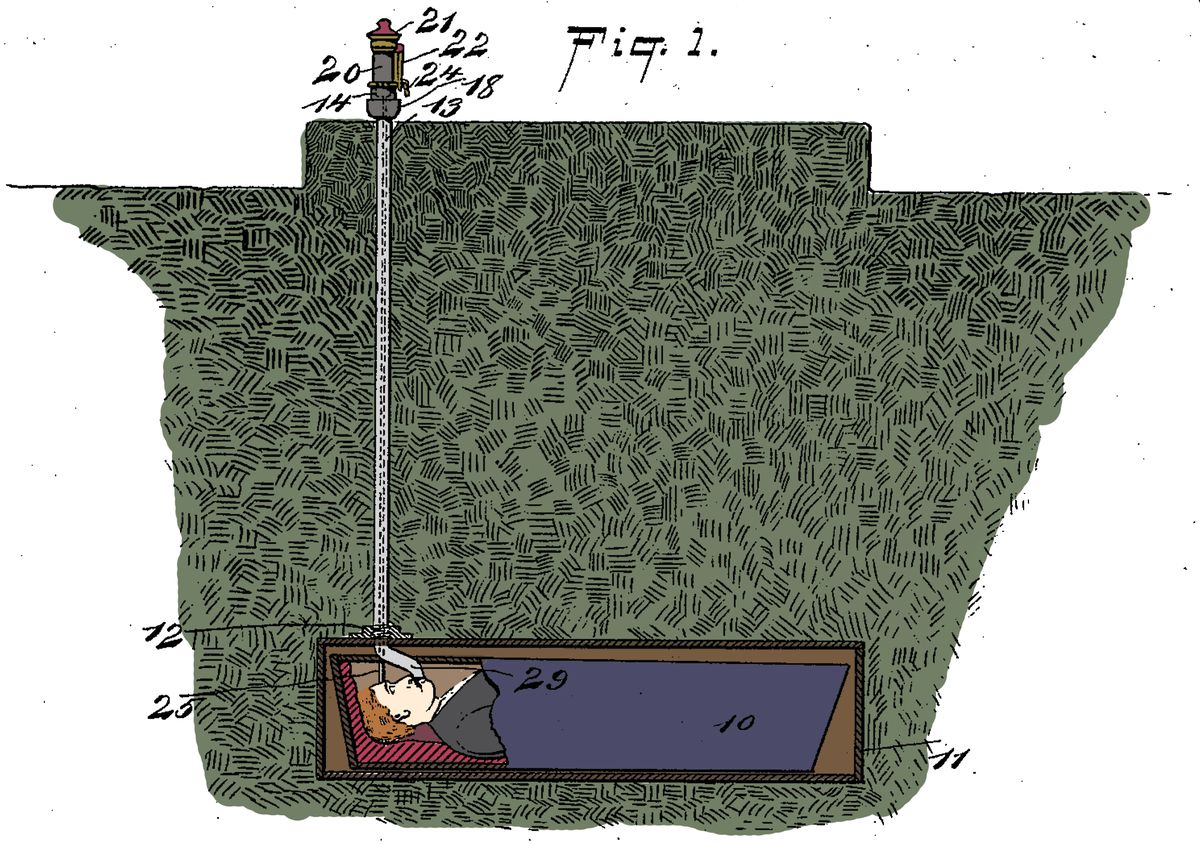 This 1894 invention gives buried people a pipe to the world above so that if they turn out to be alive, they can hit a signal device with their head and a bright signal, like a red flag, will be revealed. While they wait to be rescued, they get to enjoy sucking on a nearby air tube.

4) Break some glass with your head 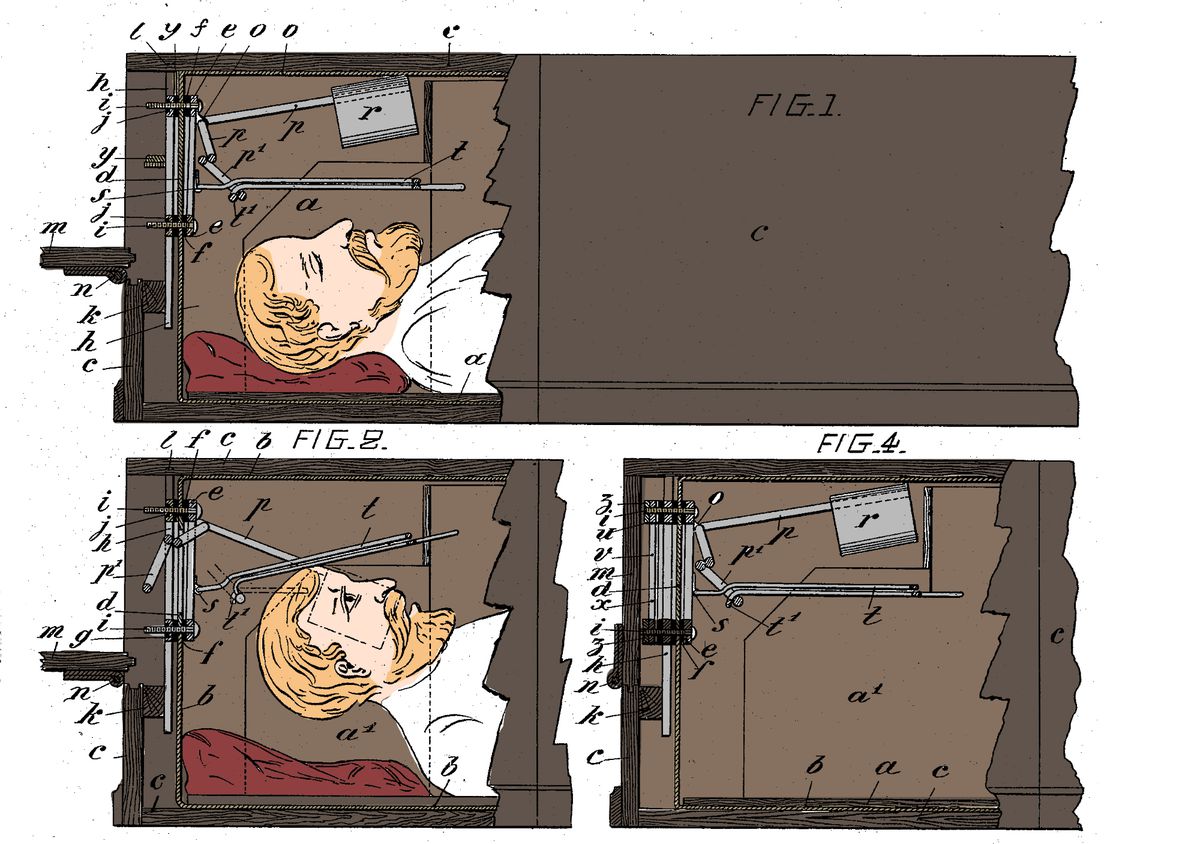 The vision behind this 1899 invention was twofold: The living could observe a corpse through a window to make sure it was dead and, if so, close the window. If the person wasn't dead, the body would jerk up, break a glass panel that admitted air, and hopefully make enough noise to be rescued. 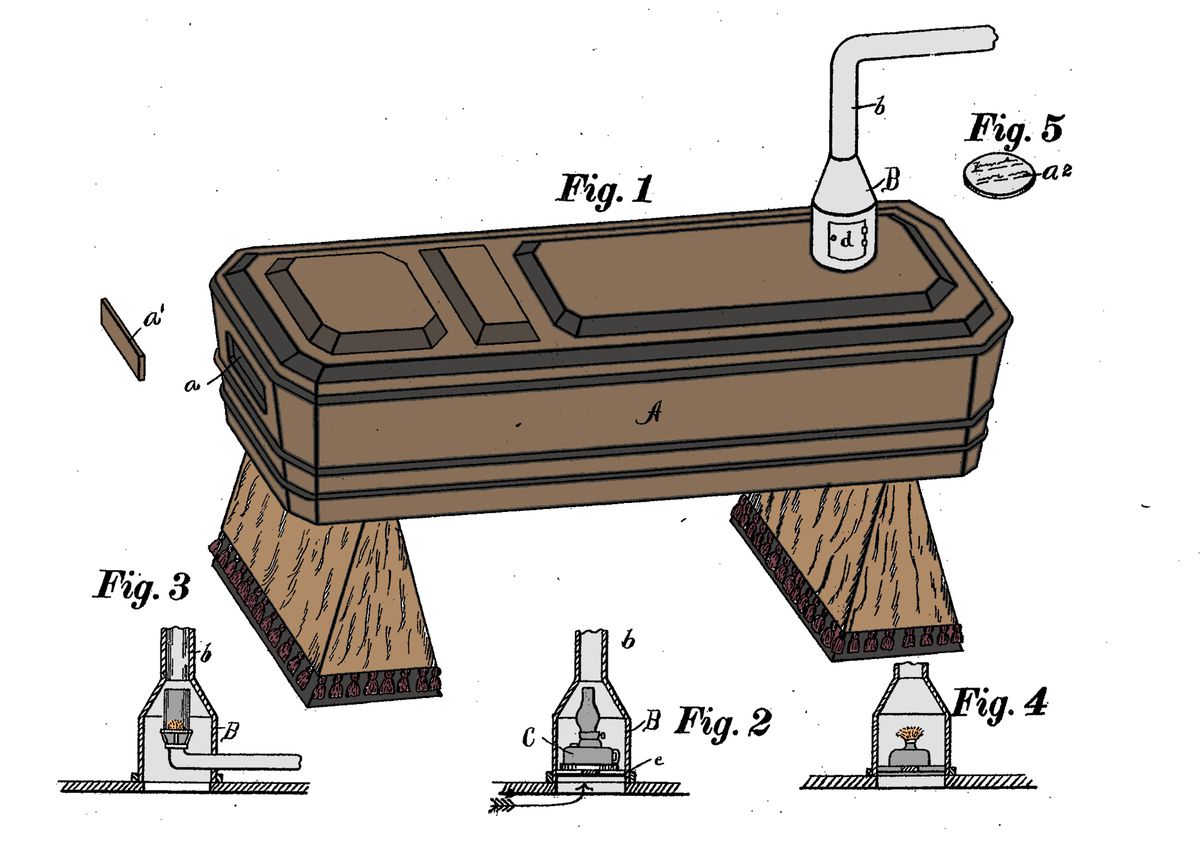 According to the 1899 patent, this coffin had two purposes: If you were alive, it would supply you with air from the outside. If you were dead, it would use a small lamp to burn disinfectant, so that fresh air flowed inside the coffin and any air that exited was "purified." It satisfied those who were equally afraid of being buried alive and of smelling bad. 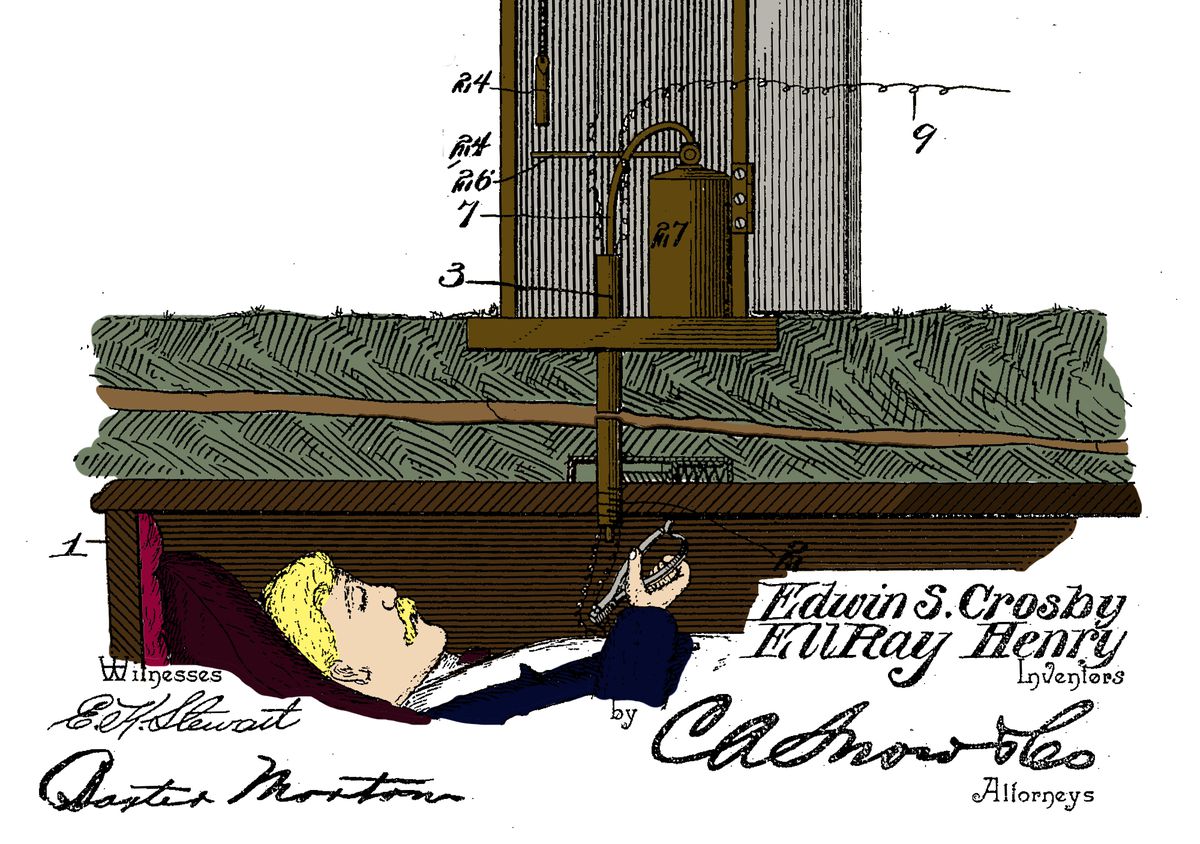 Invented in 1904, this coffin includes an elaborate system based on closed circuits. Once the buried person closes a circuit, an oxygen reservoir opens, a signal is sent through a wire system, and, hopefully, a life is saved.

Technically you wouldn't have to perform Morse code to survive, but the signal device couldn't have hurt to send a long message, like, "Please help me, I have been buried alive and am being forced to remember Morse code."

7) Don't worry. The modern era has you covered, too.

This patent from just last year shows that safety coffins can enter the 21st century. It cites an interesting religious concern: Since some religions require interment within 24 to 48 hours of death, the patent claims that the risk of being buried alive is as high as ever.

The modern solution looks a lot like the one from the 1800s. The best thing about being buried alive today? All you have to do is push a button.

When did we reach peak buried alive?

The natural question is how many people are really buried alive. The natural answer is that it's tough to know — all the data points are dead.

It might seem easier to track down when taphophobia hit a peak, but it's kind of tricky. Fear of being buried alive goes far back into the past — from Greek philosophers to George Washington, who was worried about being buried alive.

Bondeson and many of the patent dates point to a Victorian-era fervor for morbidity, fueled by horror authors like Edgar Allen Poe and a generally macabre sensibility at the time. But Google Ngram, which measures the frequency of phrases in books, shows a peak for "buried alive" in 1952. Finally, there are plenty of modern examples of taphophobic panic, from the 2010 movie Buried to the work of performance artists.

The long history of this fear shows it probably isn't going away anytime soon. So make sure you pick the right coffin.