A consideration of the Dutch performance-collective's latest ritual. 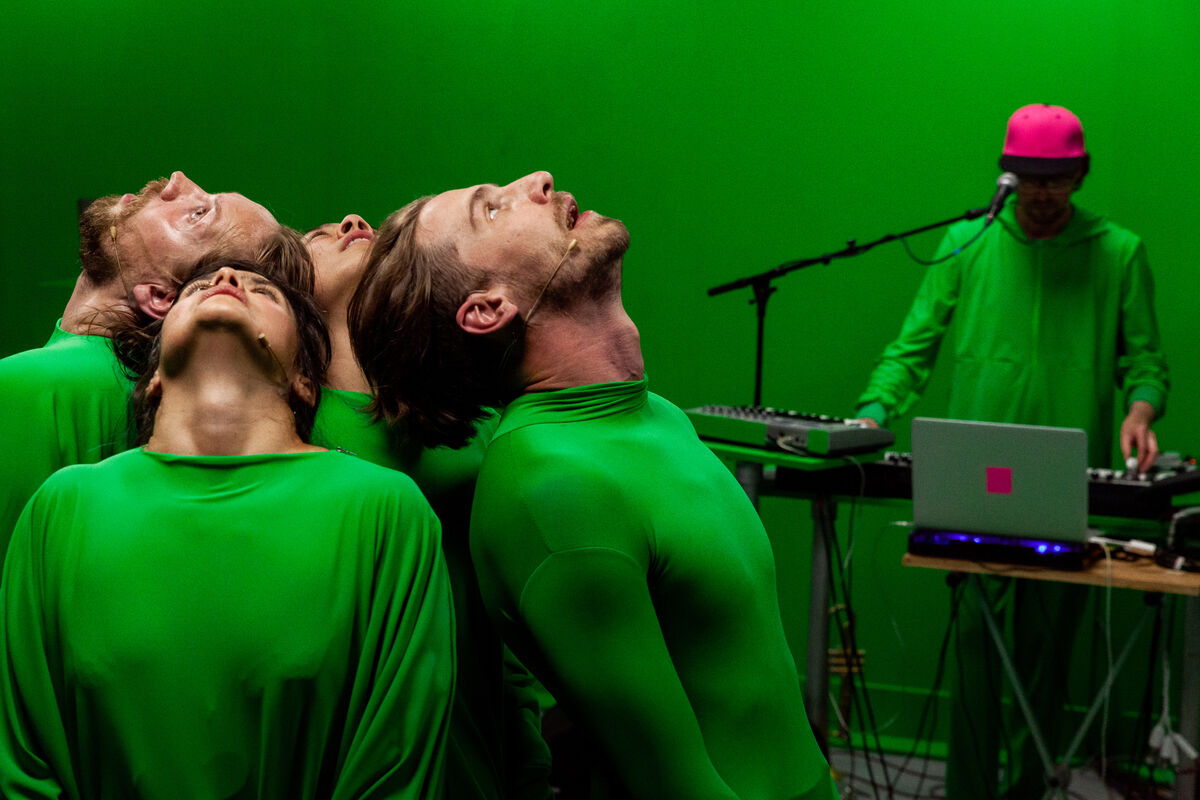 “Space divides the bodies, not the minds,” reads a quote on the website of Nineties Productions. It’s a phrase originating from the Dutch philosopher Erasmus that also appears verbatim in the group’s latest work. One would be hard-pressed to find a more apt summary of the collective’s philosophy towards digital theater, particularly as it pertains to said work, Memento Mori, a play curious of uncovering mutuality in the digital world despite (or maybe because of) physical separation.

Self-categorized as a ‘digital ritual’, the piece is a one-hour plunge into the group’s trippy neon aesthetic and experimental form.

Formed by theater makers Anne Maike Mertens and Yanick Noomen, Nineties Productions is a nomadic performance collective based primarily in Amsterdam, Netherlands. Specializing in interdisciplinary work and boundary-questioning theater, the collective (in their own words) “behaves like a tolerated louse in the coat of the city of Amsterdam, but also wriggles with a lot of love into various places in the rest of the Netherlands.[1]” Indeed, they’ve played shows all over the Netherlands in cafes, tents, art galleries, office buildings, and, more recently, on Zoom. Memento Mori takes place entirely and self-consciously in the digital stratosphere, with broadcast-location changing by performance; the latest showing came from the Theater Bellevue in Amsterdam, and the next transmission will be from Theater De Veste in Delft. Self-categorized as a ‘digital ritual’, the piece is a one-hour plunge into the group’s trippy neon aesthetic and experimental form. Part live-music-video, part meditation on death and digital intimacy, the ritual combines dance, poetry, song, and web-art into a phantasmagoria of psychedelic visuals and sonic mayhem.

Memento Mori was originally conceived for Oreol, a ten-day theater festival on the island of Terschelling which “operates at the border between culture and nature” and usually involves intimate artistic and scientific interaction with the ecosystem of the island (The festival’s name comes from a Terschelling tradition meaning “everywhere”). In the case of Memento Mori, this meant that the show was to play as the sun rose over Terschelling, creating a “cathedral of light” for the spectators and players to be consumed in. Then, with the pandemic, the festival was cancelled. The cathedral of light became fluorescent, the greenery became a sea of green screens, and Memento Mori remade itself for the digital world, referencing the original ritual only in the first movement of the show. The remade piece premiered on July 15th, 2020 at Over het IJ Festival in Amsterdam to a digital audience, with a few very-select seats reserved in the physical space for spectators. It has continued a sporadic “tour” since then, broadcasting from various spaces in the Netherlands and further transforming itself with the pandemic. As of the latest showing, for example, spectators are no longer permitted to occupy the same physical space as the company.

Despite being entirely digital now, Memento Mori still invests itself in the liveness, theatrical transparency, and intimacy of its earlier incarnations.

Despite being entirely digital now, Memento Mori still invests itself in the liveness, theatrical transparency, and intimacy of its earlier incarnations. Created by company members Anne Maike Mertens, Floor Houwink ten Cate, Yannick Noomen, Ibelisse Guardia Ferragutti, Maya Mertens, Marius Mensink, and Christiaan Verbeek, the show is performed entirely live for a multi-camera set-up and transmitted via Zoom. It features near-continuous live accompaniment from Christiaan Verbeek, with live sound mixing and video editing from members of company. The Brechtian elements of the show, originally intended specifically for the spectators in the physical location of performance, have been expanded out to the digital audience now, too. Shots of “behind-the-scenes” and “making of” are cut in with the polished story. We see actors peeling off green-screen bodysuits in preparation for the next movement. Stray cardboard and costume pieces might occasionally peek into frame. Glimpses are caught, even, of the “invisible” green-coated limbs helping to create some of the show’s special effects. Further, and most complicatedly, there is a real attempt at digital intimacy; audience members are encouraged to turn their cameras on so they can see each other and be seen by the performers. Pre-show, the players cycle on and off to share technical advice and chat with spectators. “Light a candle. Have something nice to drink,” encouraged Noomen on the February 10th broadcast. Afterwards, spectators are invited to stay while the company deconstructs the set and plays a few “post-show” songs. The notions of all three (liveness, transparency, intimacy) braid into each other here with every theatrical stroke of the company.

Narratively, Memento Mori is a journey in and out of eternity, a reckoning with the transience and mortality of humans by way of experiencing (and coming back from) death. The play’s title comes from the Latin which, colloquially translated, means “remember you will die.” Said phrase has since become synonymous with reminders of the inevitability of death, which the play is, in its way. The basic story is as follows: The four players (Ferragutti, Mertens, Noomen, and Mensink) fall into eternity and return. It’s a simple narrative told through a series of movements which feature choreography, web-art, snatches of text, song, and music. One movement features the four players dissected and collaged over four separate screens to form one body. One features a nude Noomen first curled like a baby in-utero, then literally running from his death. A song predates these two movements which goes, “some body, my body, your body, our body.” The whole project exists against saturated pinks and neon greens with a synthy-score and a lurid, oversaturated quality which places the piece comfortably in the aesthetic of the 90’s Avant Garde. For an American framing, it’s something of Dante’s Inferno by way of Adult Swim.

Despite the linearity of the structure (what is The Inferno if not well-designed?), meaning and answers are not easily found in this meditation. The viewer might register notions of our collective being, the body and its double, the void, grief, and a kind of Vico-esq circularity to our existence, but there is no epitaph or final summation shared. “How does it end? It just does.” Go the last spoken lines in the show. Memento Mori is more a questions piece than it is an answers piece, then, which also holds true of its theatrical form and of the company in general. There are no prescriptions from Nineties Productions about death or digital theater, only curiosities and etudes shared with a spirit of generosity and play. In fact, despite the peekings-in of our current bleakness (During the February 10th broadcast, Noomen and Mensink commented that the reason the company was able to perform at all was that had been given passes for walking home, as the show would finish after Amsterdam’s curfew) the company’s approach to grief remains markedly buoyant. The show is an invitation for release which extends itself with such earnestness and warmth that one might forget there is something to be sad about in the first place. And perhaps this is the indicator of successful digital intimacy.

Nineties Productions’ line of theatrical questioning will continue with further performances of Memento Mori, and a series of eight residencies exploring digital making. These residencies, each running one week with a different artist, will begin later in February and feature public-showings every Saturday night until the end of the program in late April 2021. Updates can be found on their website here. There is some hope yet for the future of interdisciplinary performance and digital theater with this company, a collective whose bold strokes might bring us closer to something like digital intimacy.

To learn more about The Civilians and to access exclusive discounts to shows, join our email list at TheCivilians.org.