Be thrilled by skull-themed attractions around the world that are more whimsical than bone-chilling.

There’s no bones about it—skulls have captured our imaginations throughout the centuries. A grinning white cranium has a thrilling morbidity, as well as an unexpected beauty; it’s no wonder artists worldwide have been inspired to create captivating works based on their likeness.

Human skulls visibly remind us of death’s approach, which is why we often find “memento mori” carved into tombstones. Some ancient cultures, such as the Aztecs and Maya, designed temples and Day of the Dead festivals around their imagery. And let’s not forget the fun and edgy factor, which makes skulls the perfect theme for pirate restaurants and roller-coasters.

Enjoy this not-so-grave collection of destinations with imaginative portrayals of skulls. You won’t stumble upon real skeletons in any of these places, although there are indeed crypts and cathedrals built from human bones. Open year-round, these attractions are sure to delight anyone who lives as if every day is Halloween. 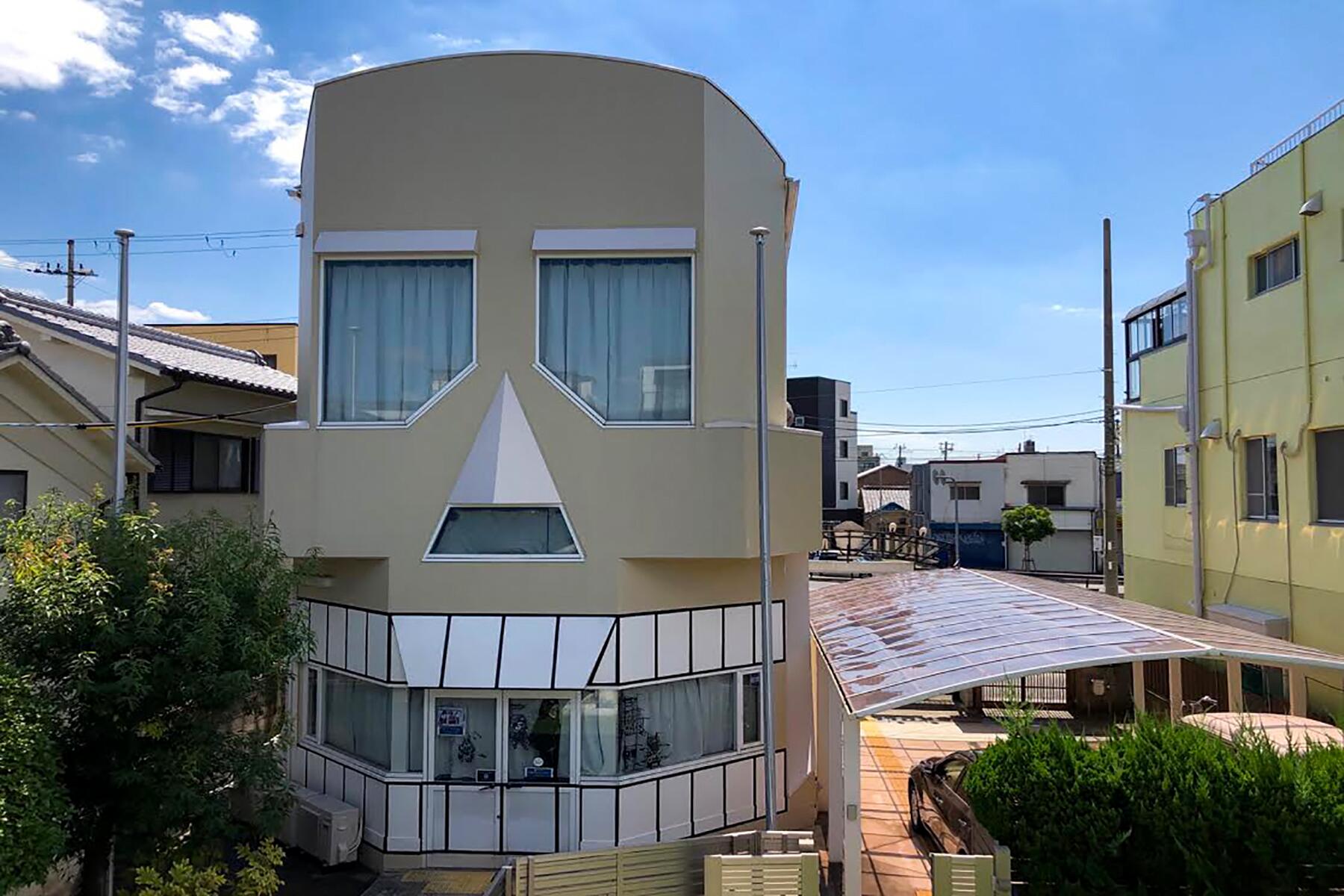 In the drab industrial city of Amagasaki, one building sticks out like a sore thumb—or rather, like a human head. Scratch your head over a white, skull-shaped house with cut-out windows for the eyes, a triangle nose, and a horizontal row of teeth. Inside, you’ll find the whimsical Skull Museum, which is the only one in the world dedicated to our mugs. Local neurosurgeon and professor Kenji Kawamoto founded the museum to showcase over 8,000 cranial objects, ranging from Tibetan carved skulls to heavy metal album covers and cute Halloween toys.

INSIDER TIP
The Skull Museum is only open on Sundays. Most of the displays have Japanese descriptions, but the brainy doctor speaks some English and is delighted to show visitors his collection. 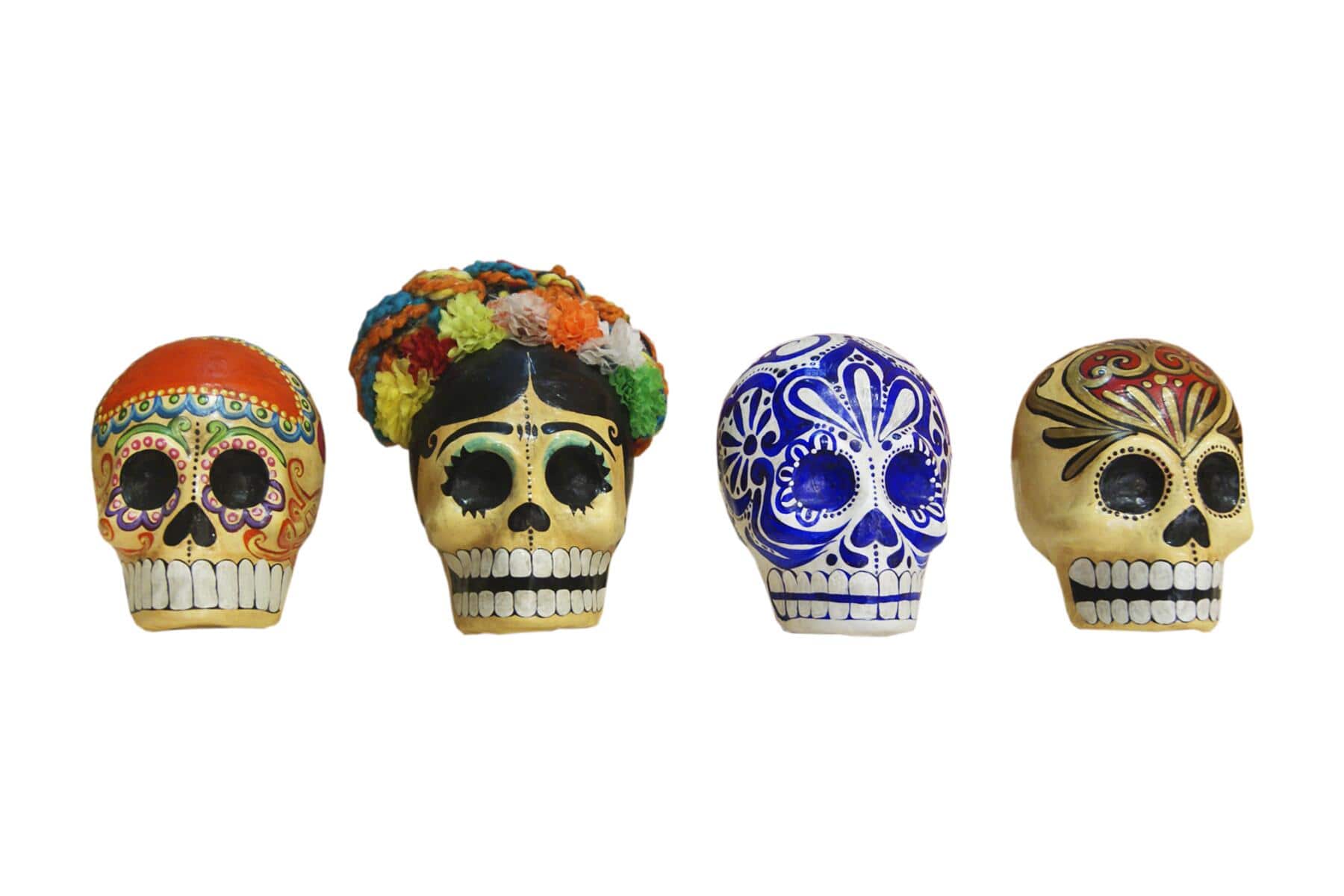 If you’re fond of Day of the Dead, then you’ll love Casa de los Venados, which houses the world’s largest private collection of Mexican folk art. The maze-like rooms and courtyards are filled with over 3,000 works, including hundreds of skulls. Marvel at the joyful papier-mâché skeletons and “calavera,” or sugar skulls traditionally offered to ancestors. Strike a pose with a Catrina, or dapper skeleton dressed in aristocratic garments. When you reach the outdoor rotunda, look up: you’ll see a smiling skeleton family, including a dog wearing a bandanna, waving down at you. 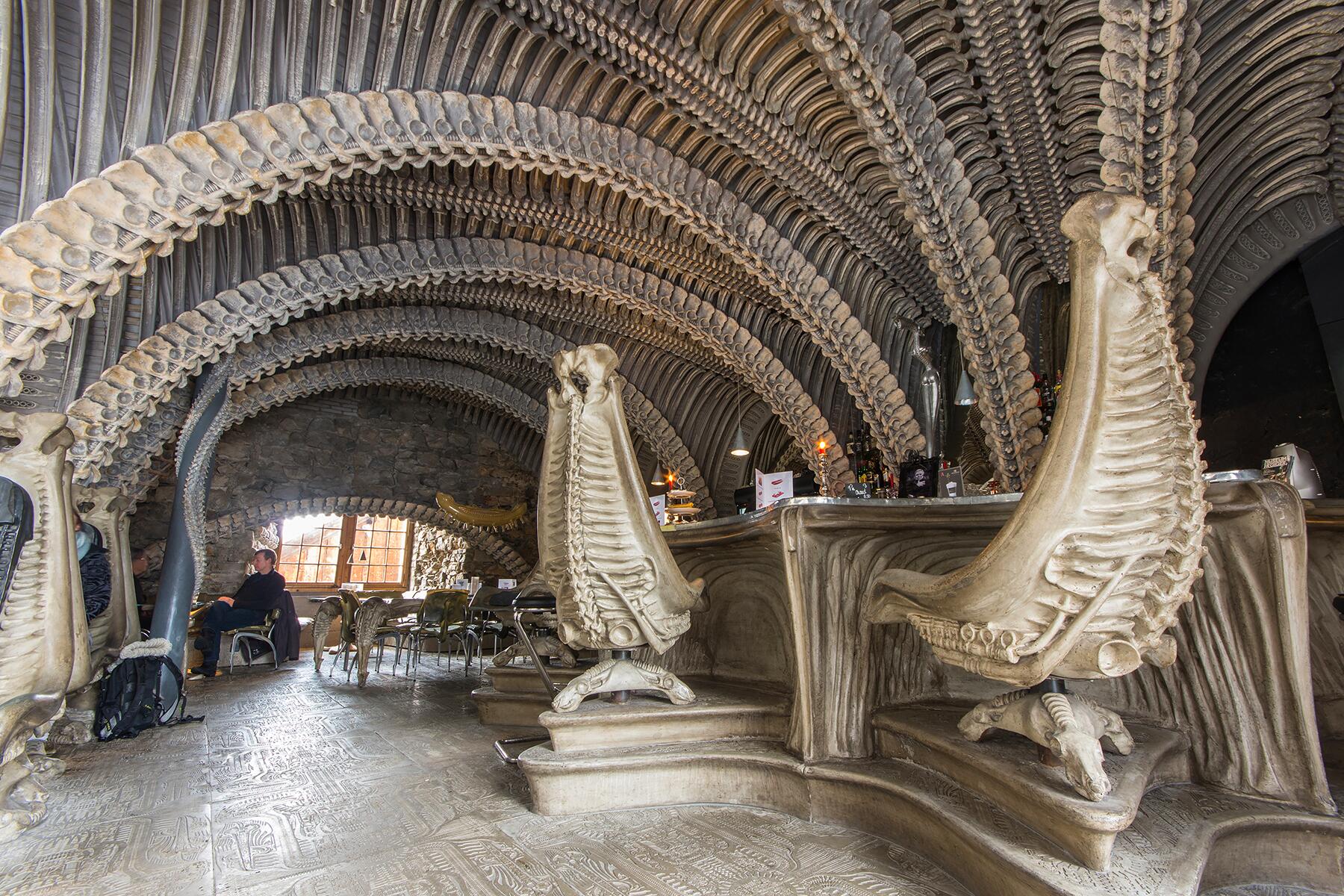 Surrealist artist HR Giger designed bloodthirsty space-creatures with elongated skulls, which terrified viewers of the Alien movie series. At Giger’s Museum in Gruyeres, you can come face-to-face with these extraterrestrials, as well as his other biomechanical works based on fantastical skeletons. Some of his alien sculptures, such as a translucent head with a long cranium and two rows of pointed teeth, are straight out of a nightmare. Don’t forget to stop by the adjoining HR Giger Bar, which is decorated with his spine-like arches and chairs.

INSIDER TIP
The Giger Bar is first come, first served. Visit on weekdays or during off-hours, to get a better chance of sitting on one of the curved backbone seats. 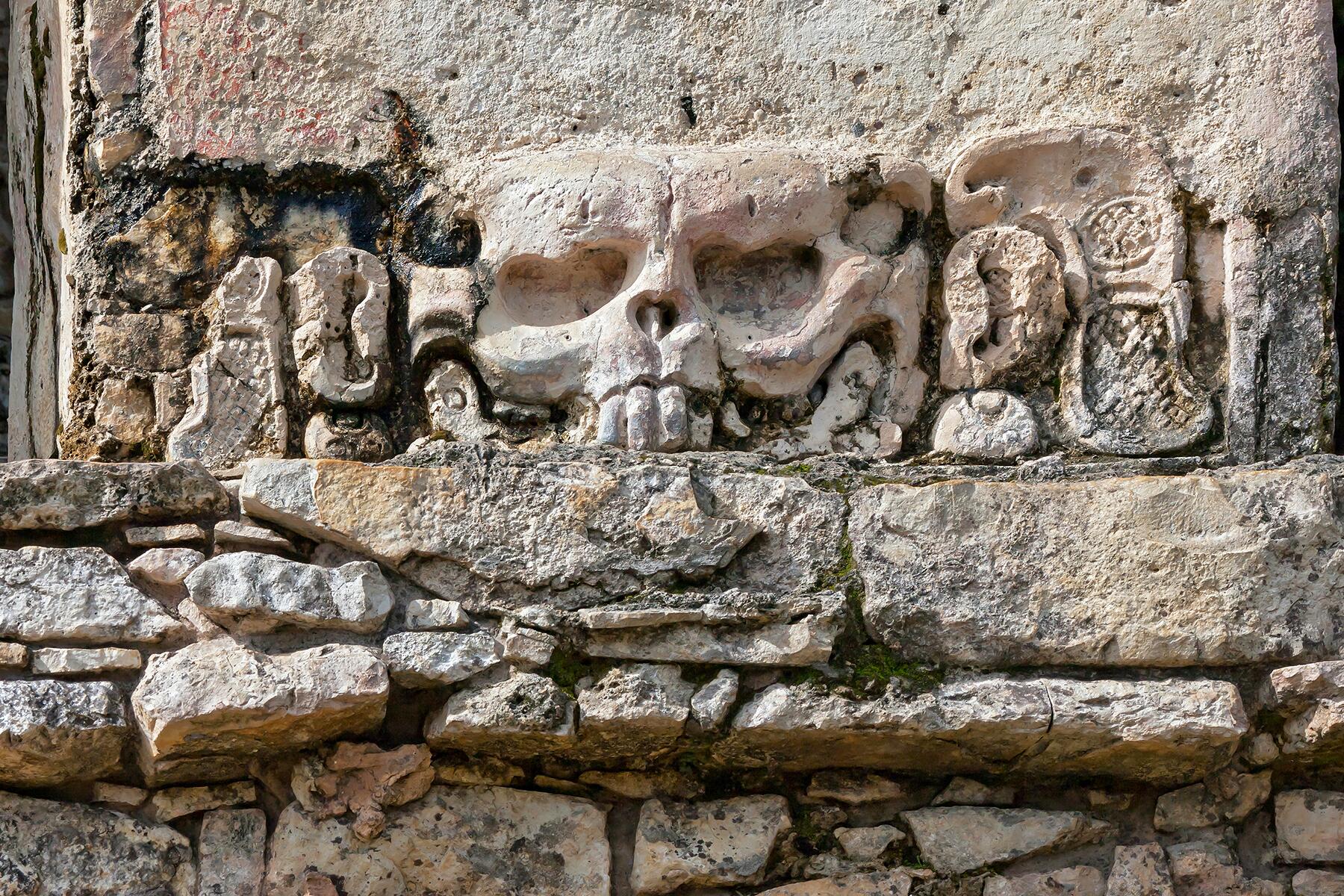 Temple of the Skull

Palenque was once a prosperous Maya city. Today, all that remains are mysterious ruins surrounded by the jungle. Palenque’s most striking archaeological site is the Temple of the Skull, which dates back to the 8th century and reveals the deep Maya fascination with death. After climbing up the dramatic stone stairs, you’ll notice that one of the pillars has a stucco relief of what appears to be a rabbit skull. With heart-shaped eyes and a tiny jaw, the animal looks unexpectedly cute, and perhaps a bit grumpy. 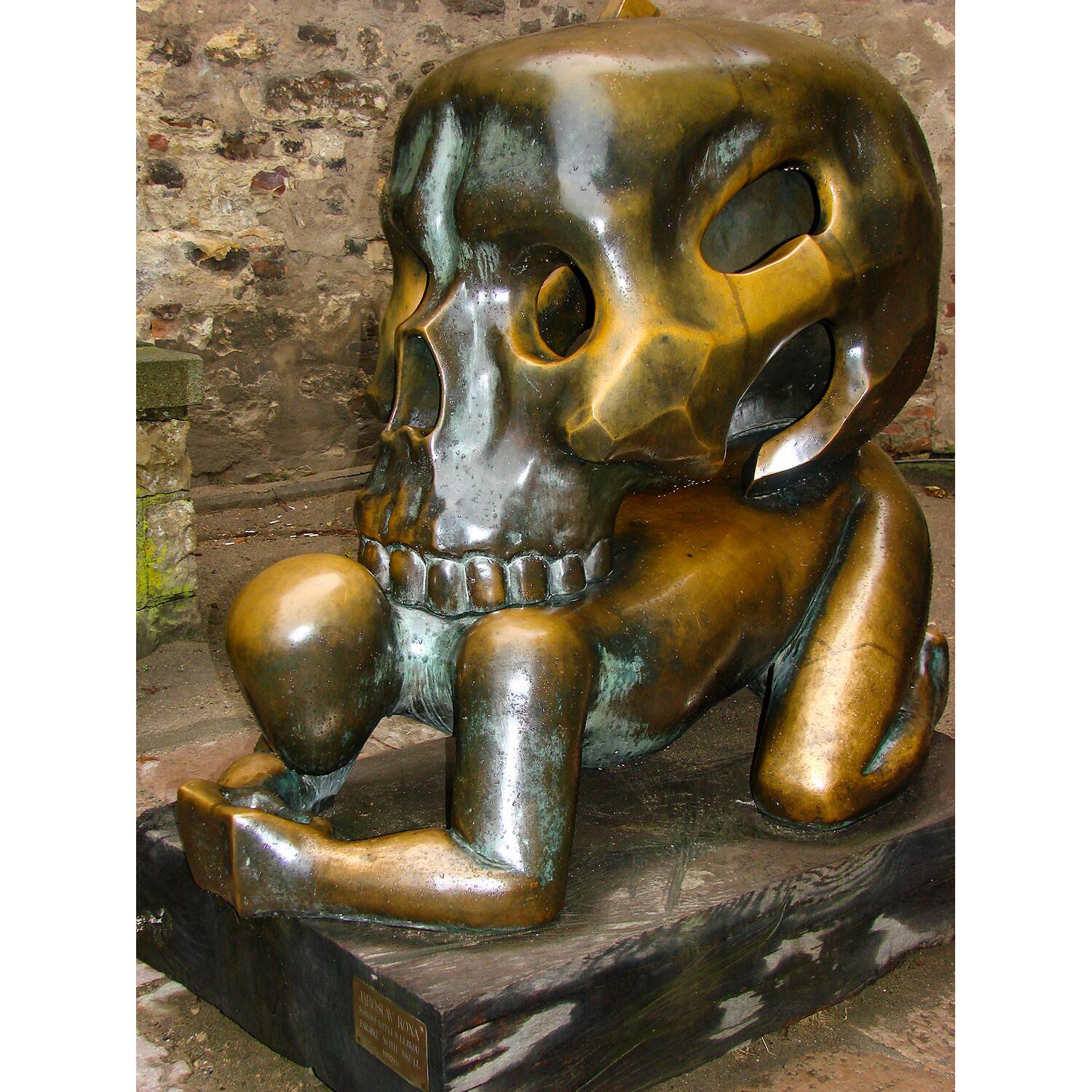 Visitors to Prague Castle have been unable to make heads or tails of a sculpture by Jaroslav Róna that is located on its grounds. Called “Podobenství s Lebkou” or “Parable With Skull,” the bizarre bronze shows a faceless man groveling on his hands and knees. A gigantic metal skull sits on his back, crushing him under its weight. According to the Czech artist, his surrealist sculpture is based on the beggar character in Franz Kafka’s 1917 short story, The Bucket Rider.

INSIDER TIP
If you’re interested in seeing real human skulls while in Prague, visit the nearby Sedlec Ossuary. The Medieval chapel is decorated with the remains of over 40,000 skeletons, including a chandelier made from femur bones, and an altar stacked with skulls. 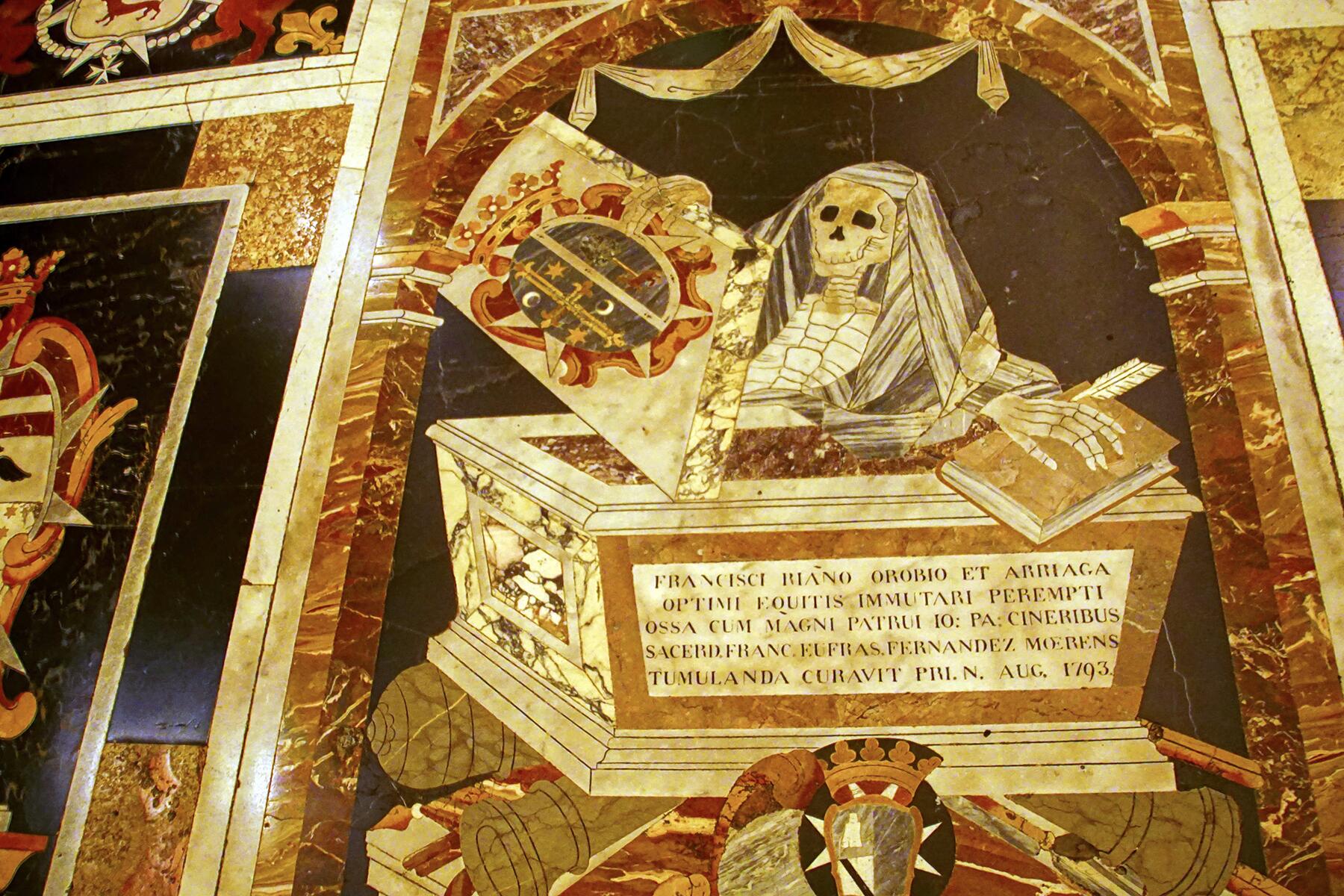 Built in the late 16th century, St John’s Co-Cathedral is a study in Baroque flamboyance. Every inch of the church is covered in gold detail and dramatic oil paintings. However, don’t forget to look down, or you’ll miss the colorful marble floor inhabited by dancing and drinking skeletons. These rectangular floor panels are actually tombstones, which honor the 400 brave knights who died in the 1565 Great Siege of Malta. Each has a different ornate design that symbolizes death and eternity, including a skeleton holding a reaper, and an angel crowning a skull. 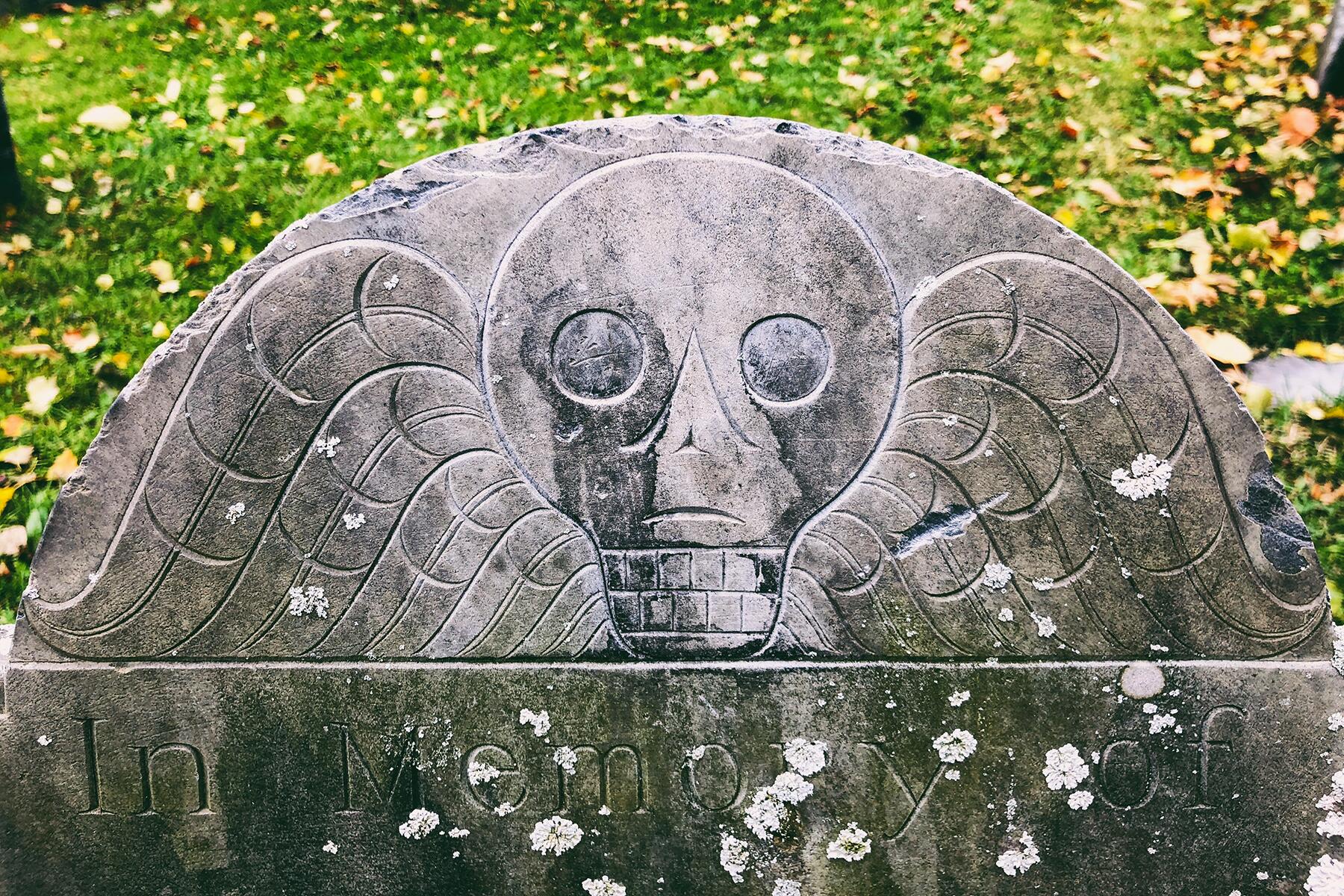 
Founded in 1660, Boston’s Granary Burying Grounds has a rather grave collection of tombstones. Many of them are carved with winged skulls and crossbones, which give them a rather Goth appearance. Since the Puritans opposed religious imagery like crucifixes and angels, they decorated their tombs with “death’s heads” that represent the soul flying to the afterlife. Some of these “soul effigies” have scowling rictuses, while others are smiling—a type of early “emoji” that reflected the fate of the dead. 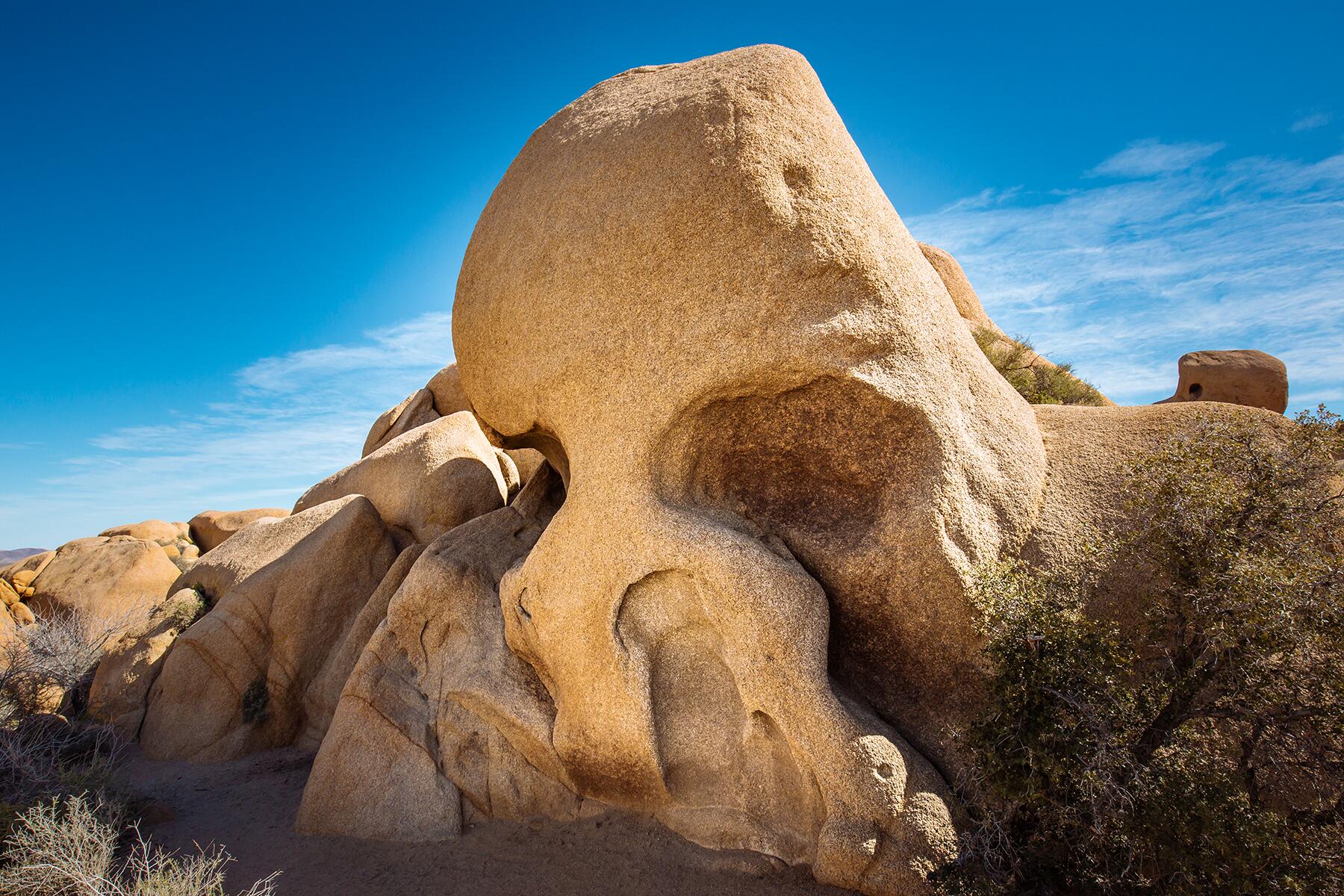 Joshua Tree is a national park filled with peculiar natural attractions, such as cholla cactus fields and otherworldly desert landscapes. However, perhaps the weirdest sight is Skull Rock, a natural formation that resembles an enormous cone-headed cranium. In this case, the artist is Mother Nature herself. Rain eroded the granite over the centuries, creating what looks like two eye sockets and nostril indentations. After snapping a selfie, hike the 1.7-mile long Skull Rock Nature Trail, which takes you on an easy loop past the boulders. 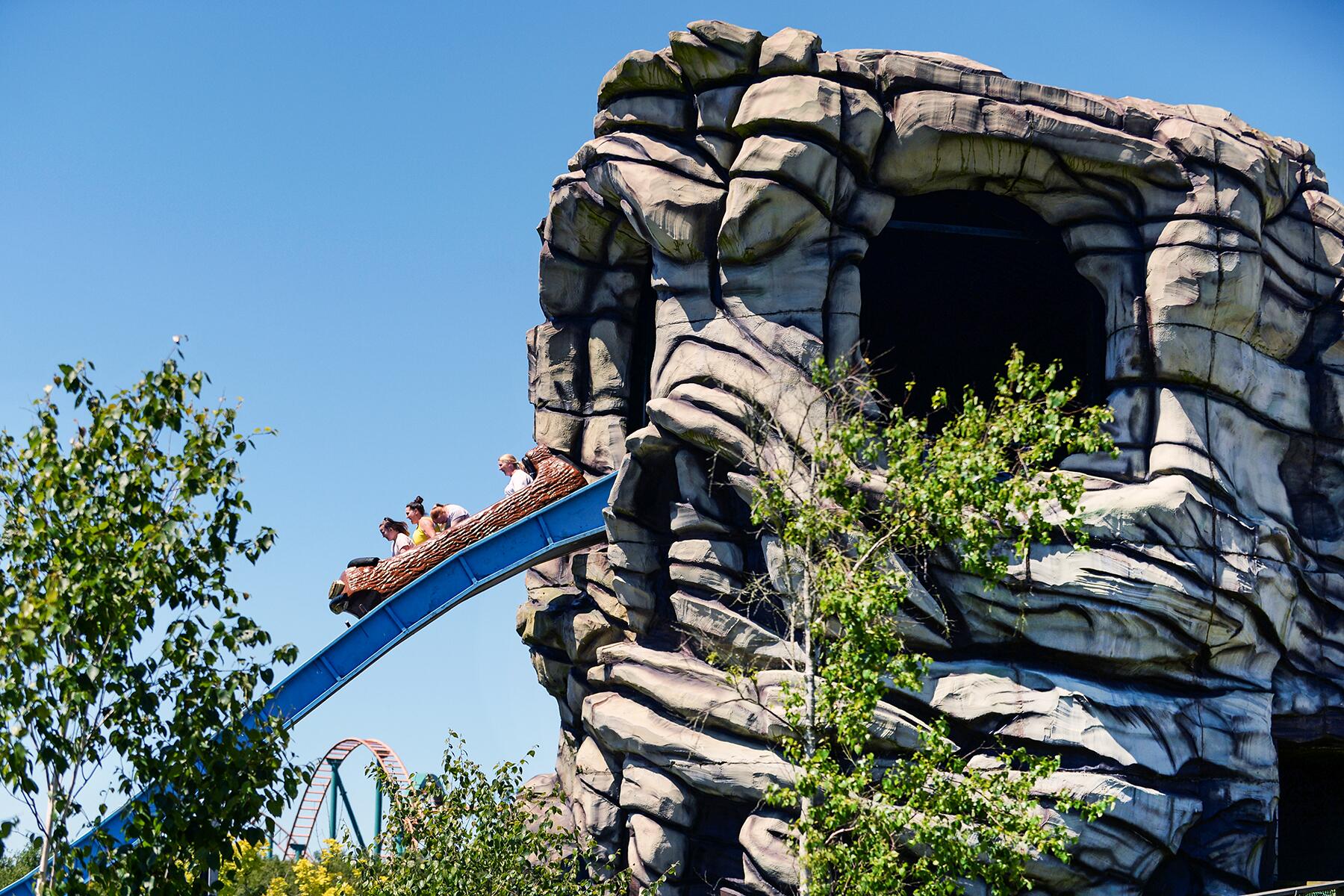 Board a thrilling water ride and scream your head off at Oakwood Theme Park in Wales. The “Skull Rock” log flume races through a series of hills and valleys, and veers into a cave teeming with pirate crossbones and treasure. The ride cumulates with a long, anxious ascent into an ominous grey skull. In what looks like a scene from a Mad Max movie, the log shoots down a tall slide from the right eye socket, generating a satisfying splashdown.

INSIDER TIP
For more spine-tingling thrills, check out the “Skull Mountain” rollercoaster at Six Flags New Jersey. In the summer, the carved skull exterior turns into a spooky waterfall. 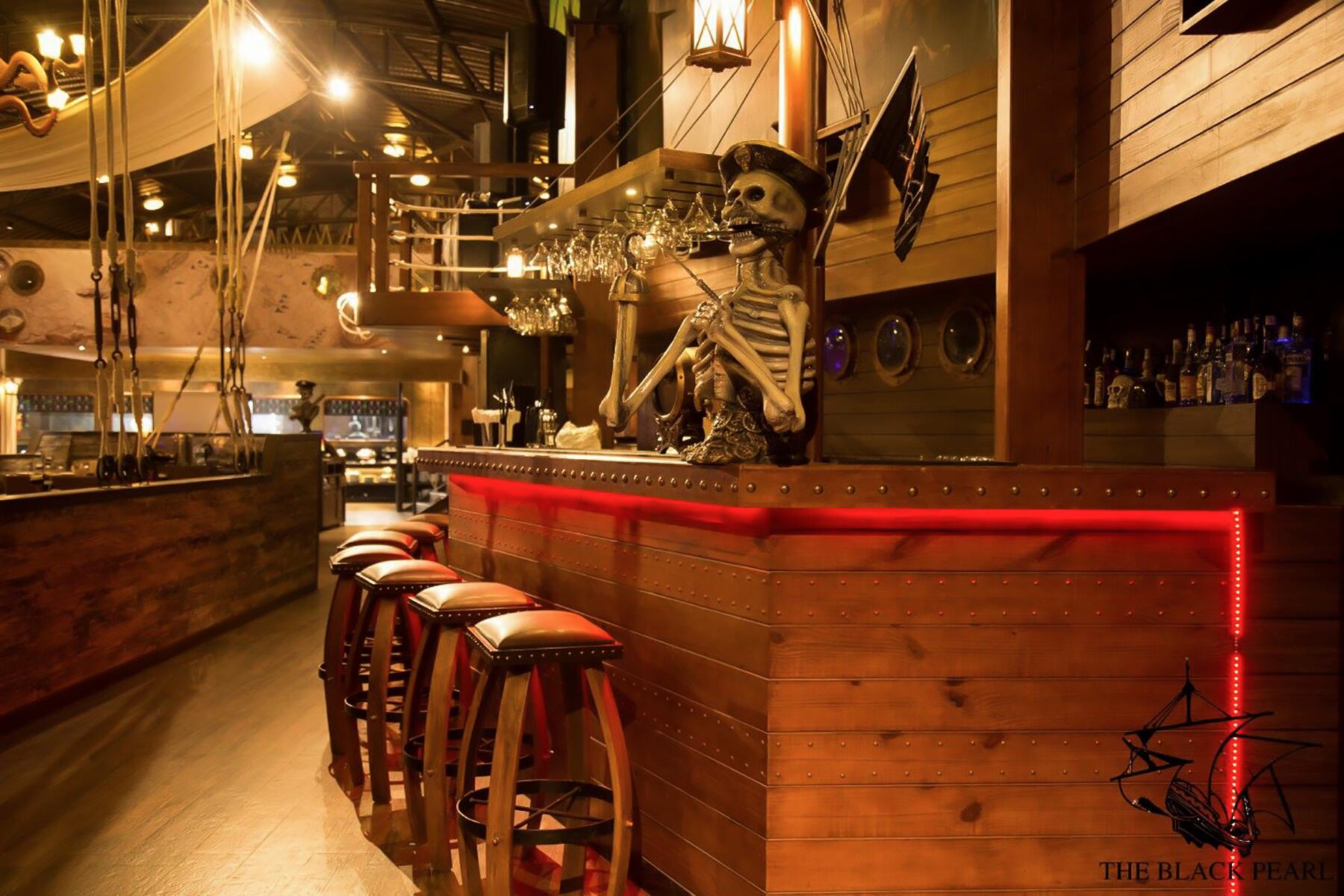 When you step into Bangalore’s Black Pearl Restaurant, your eyes are certain to pop out of your head. This pirate-themed restaurant is decked out to the nines in kitschy skulls and bones. Say “Arr” to a skeleton mannequin in a tricorn hat, before conquering a table surrounded by white sails and ribcage-backed chairs. If you’re in the mood for rum, head to the bar illuminated by glowing red skulls. Sit in a quirky seat that looks like a bony white hand and order a round of strong drinks for your mateys.