Rocket from the crypt! Phyllida Barlow on her Highgate cemetery sculpture The sedate graveyard, full of classical colonnades, has been given an injection of colour and fun by art’s great late starter. She talks about her new installation – and using the pandemic to reflect 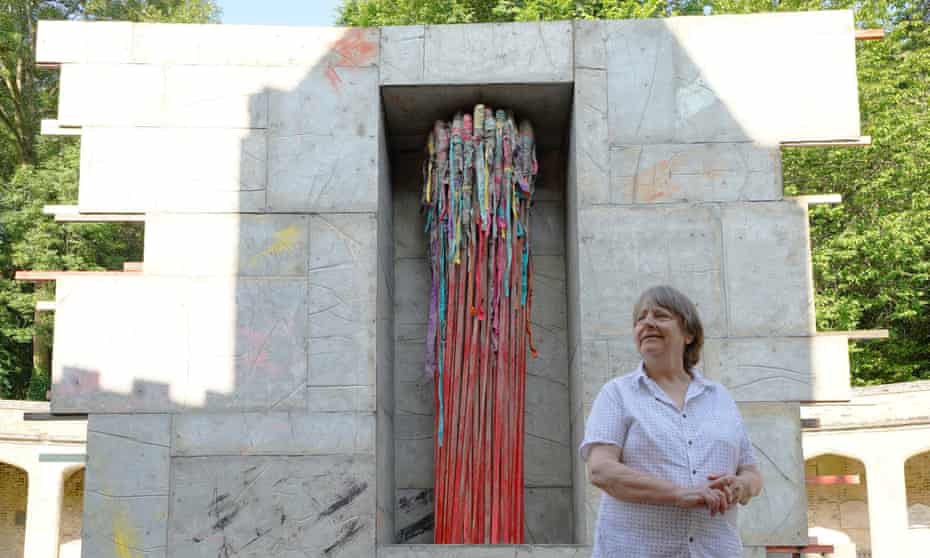 ‘We were two-thirds of the way there when we suddenly had to find another venue’ … Barlow with her new work. Photograph: Jonathan Brady/PA


After 18 months of lying low, Phyllida Barlow is at large again. The artist’s hangar-like studio on a south London industrial estate is a yawning void, while on the other side of city, and across the sea in Germany, and thousands of miles away in Japan, the works she conceived and constructed in it are looming into a monumental new life.

Under plastic, dwarfed by the empty space, is a model of the piece she has contributed to a group exhibition of 16 female artists aged 70 or older, at Tokyo’s Mori Art Museum. At 77, Barlow is a mere stripling in a show whose oldest contributor is 105. She pulls back the sheeting to reveal a riot of wood, plaster and fabric, in gloriously clashing oranges and pinks. But its thrown-together appearance is an illusion; as she talks, she primps the ruched cotton like a couturier preparing a bride to walk down the aisle.

One of the art world’s most celebrated late starters, who only began to be exhibited after retiring from her job as an art teacher at the age of 65, she has become a byword for a certain sort of chaotic exuberance. When I tell her that an eminent director I recently interviewed described an adventure playground as “like something by Phyllida Barlow”, she sighs and admits that the comedian Harry Hill made a similar joke, but she’s trying to steer clear of the adventure playground association, thanks very much.

There’s no denying, however, that she is a disrupter. Before she became an international star – awarded the back-handed honour of representing Great Britain at the first Venice Biennale to be held after the Brexit vote – she went her own way, making art from old TVs or sofas, begged and borrowed from friends, which she would tie to lamp-posts in the street. “I call them uninvited guests … challenging where art goes, beyond the wall and the mantelpiece, and making the spaces uninhabitable.”

She’s about to fly to Munich for just such a disruptive intervention, as designer of a new production of Mozart’s Idomeneo, directed by a radical young Brazilan director, Antú Romero Nunes. “I’ve been warned that they’ll probably boo it like anything,” she says. “He loves it when they boo because it shows they’re having opinions. It’s notorious for any slightly controversial work, which this certainly is.”

Two days later she’ll be back in London for the unveiling of an installation that will command the entrance courtyard of Highgate cemetery for the rest of the summer. Appropriately for an artist who revels in rubble, it’s half finished when I visit, heckling the sedate surroundings of a classical colonnade with piles of polystyrene, wood offcuts and sacks of cement while, a few metres away, a hearse noses gingerly on to the narrow lane outside, followed by a file of funeral guests.

The Highgate installation is called Act. “The idea was to do something that was a fake, a folly, a sort of shadow-play of the objects around it,” she says. From the front, it appears to be a grey stone wall with a large central niche full of poles painted in carnival colours, as if awaiting some sort of pagan funerary rite. From the back it reveals itself to be a stage flat, supported by higgledy-piggledy piles of plywood and held together by steel struts. It’s a reprise of an earlier work she showed at the Royal Academy, “where I had this stack of odd objects, timber with flags and ribbon round them, like decaying remnants of a celebration, or objects that are to be used in something ceremonial.”

It’s easy to see how the boisterous theatricality that links the Highgate installation with her opera set might baffle opera-goers unaccustomed to seeing their singers competing with five-metre-high balls of rough white scrim and plaster. Idomeneo is set in Crete, so she has imagined a coastline dominated by colossal breakwaters. No disrespect is intended, she says – she has loved opera since she was first taken to see one as a nine-year-old. But it’s scenery as protagonist rather than as backdrop – or as she puts it: “One art form in communication with, not in service of, the other, which opera singers are not used to at all.”

It has already been causing sleepless nights for Bayerische Staatsoper’s German set-builders, with whom she has been collaborating over video link. In visual arts, she explains, trial and error is an accepted part of the process, whereas in set-building, precision is all. “I was saying ‘I’ll show you the gesture and you copy the gesture’, she says, with a sweep of her hand, as if she is scattering grain. “But they wanted to know exactly how to do it.”

The challenges of combining two such different ways of working came to a head over the watery brushmarks she wanted painted on the floor. “They asked how I did it and I said I used a lot of water with the paint. They said they couldn’t use water on the floor, so they’d paint the effect, but I really didn’t want that.” In the course of trying to find a channel of communication, they showed her an antique clock that they’d made, “and it was an absolutely immaculate replica. That’s their method: copying, not using a technique for real.”

It’s a fascinating insight into the way in which she collaborates with her usual assistants, three of whom who are hard at work in Highgate translating her “gestures” into something that can hold its own, come hell or high water, on a site far more weather-beaten than the one for which it was originally designed. Part of an off-site reopening for the gallery Studio Voltaire, while their own premises are being revamped, Act was originally intended to stand in a chapel in London’s Nunhead cemetery, until the local council ruled that the chapel was unsafe.

“We were two-thirds of the way there, and we suddenly had to find another venue,” says Barlow. The original design turned out to be far too small to make any relationship with Highgate’s colonnades, so they had to increase the size and make it work on a site that’s very exposed to the elements. “The structural engineer wanted extra steelwork, and final confirmation was slow in coming, so we had masses of time and no time. In the end we had about five weeks to turn it around.”

Perhaps because of her years in the wilderness, juggling the demands of bringing up five children while teaching at the Slade and trying to find her own way as a practising artist, Barlow has taken the demands of the pandemic in her stride. For the first few months, she and her husband – fellow artist and teacher Fabian Peake – were afraid to set foot outside their London home, so that every big commission, including a solo show for Munich’s Haus der Kunst, which she will also see for the first time this week, had to be constructed via Facetime.

It is art as a strange sort of keyhole surgery, but it has its positive side. “I suppose this is a very romantic view of the pandemic, but I wonder if it has maybe given us some time and space to think about where our art is going,” she says. “I know it’s a pretty dire and panicky time for museums and galleries but, within that, is there a way of using the oasis that it has created to take the pedal off the accelerator a bit, and allow different ideas of creativity to be seen? Does it offer an opportunity to develop a sort of confidence that is less materially frantic?”

For an artist who has always been happy to collapse and recycle her own works, this is not such a stretch. Barlow makes some small sculptures for sale, pointing out that she still has a house to run and family members to support. But her relationship with material success was thrown into sharp relief on a recent tour of a wealthy collector’s house. “There was a mantlepiece with two huge candlesticks and this little work in the middle. I said ‘I like that’ and she looked at me in surprise and said, ‘Well you should: it’s yours.’ It was very peculiar, like a lost relative or something.”

She’s not sure what the future will hold, and is negotiating a new way of working that is less physical and more appropriate to her advancing years. The lease on her studio comes to an end next spring and it may be her last big space, she says. But she’s used to adapting. “When I retired, and got taken up, of course it was an enormous change to an artist like myself who had been raising a family and not getting exhibitions, working on my own and developing all sorts of disciplined relationships with what work is,” she says.

“When people talk about me as a well-known artist, it’s almost as if they are talking of a phantom version of myself that I don’t know. But I think a lot of us who spent our careers teaching have managed to keep our studios open. We’re jobbing artists. There’s nothing glamorous about it. There’s just an urge inside me to do art, and it just happens that it’s a very physical activity. There’s no logic to it. I can’t offer any explanation, other than that humans have these urges.”

Act is at Highgate cemetery, London, from 24 July to 30 August. A giant sculpture has just been unveiled in Highgate Cemetery
https://www.timeout.com/london/news/a-giant-sculpture-has-just-been-unveiled-in-highgate-cemetery-07...