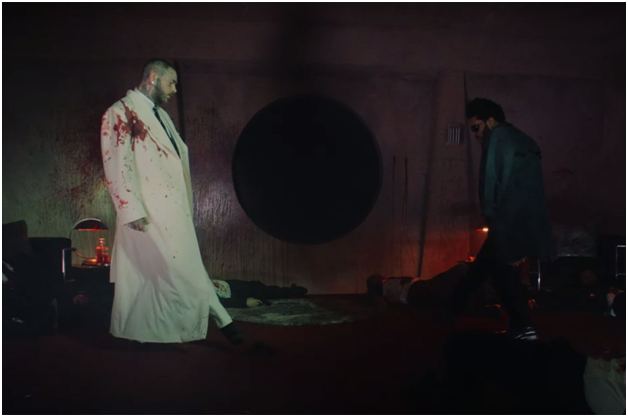 The song marks the first collaboration for the Hot 100-topping duo.

Post Malone and The Weeknd deliver nothing short of a bloodbath in the new music video for their first joint track "One Right Now," which premiered Monday (Nov. 15) and isn't for the faint of heart.

The visual kicks off with The Weeknd casually walking into a building before opening fire on a series of men to get revenge on his cheating ex-girlfriend. "Said you love me, but I don't care/ That I broke my hand on the same wall/ That you told me that he f----d you on," he sings in the chorus.

With his arm in a cast, the singer continues his shooting spree as he moves through the space, even unleashing a grenade at one point.

Soon after, Malone chimes in, saying, "Said you wanna have my babies, I f---ed you so good you should pay me/ Don't call me 'baby' when you did me so wrong."

Post Malone then picks up a rifle of his own and proceeds to shoot several Weeknd doppelgangers along his path, until he meets his archnemesis face to face.

Spoiler alert: In the end, The Weeknd and Malone fatally shoot each other simultaneously.

Adele Holds at No. 1 on Global Charts, Post Malone & The Weeknd, Travis Scott Start in Top 10

In addition to the new music video, Malone released a limited-edition “One Right Now” merchandise collection, available for purchase online.

See the new "One Right Now" music video, directed by Tanu Muino and starring the Billboard Hot 100-topping duo of The Weeknd and Post Malone, below: