Two experts will discuss the 1840 work, which mixes natural beauty and human tragedy. 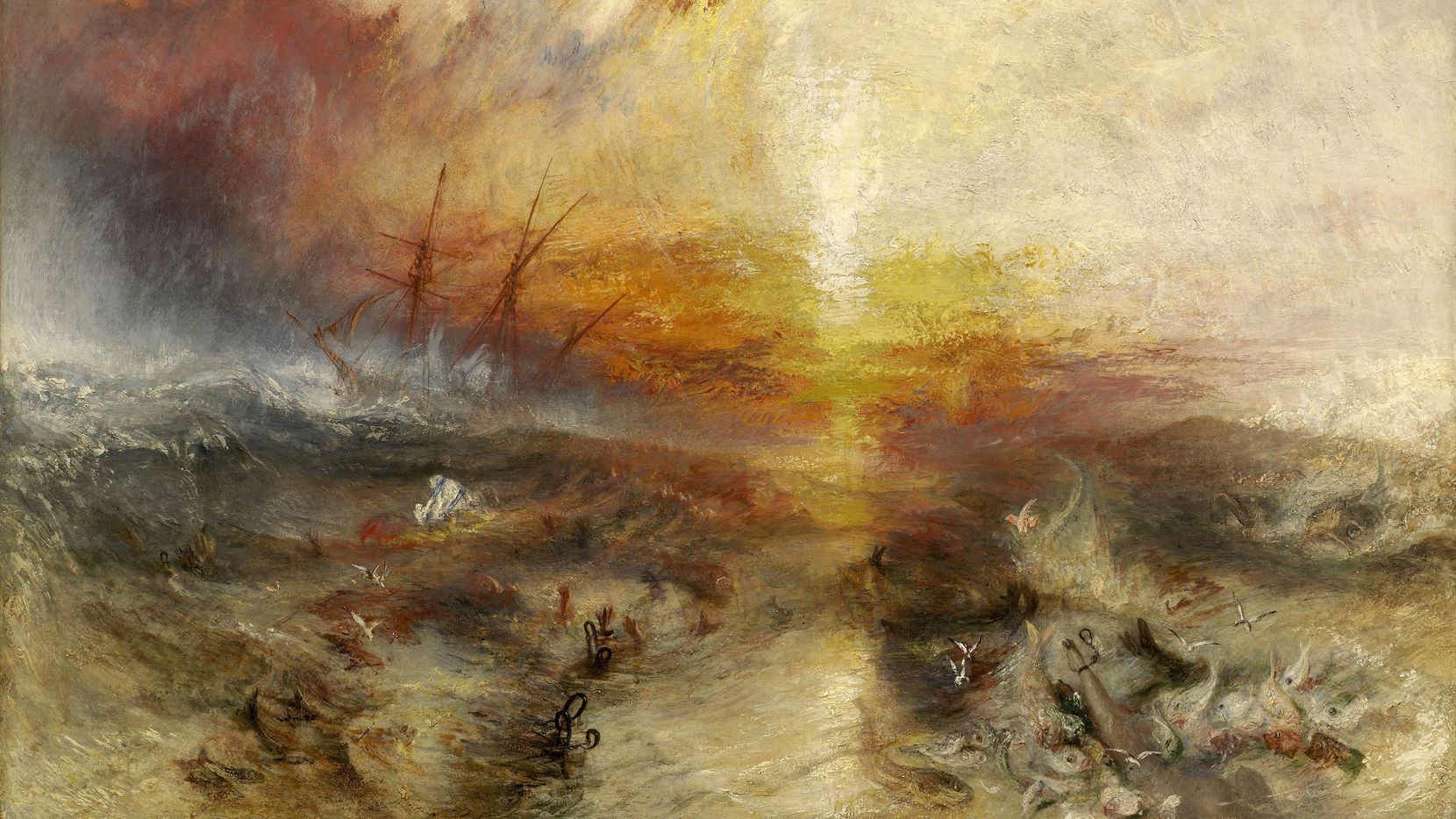 
On Jan. 14, the Kimbell Art Museum will premiere an online lecture by two world experts on the 19th century, exploring one of the most important paintings of the Romantic period.

At first glance, J.M.W. Turner’s best-known work appears to be another dramatic example of a Romantic maritime painting: The setting sun shines through swirling clouds over the churning ocean, turning the water and sky shades of rich red, orange and purple.

Only upon looking closer does a viewer realize that the painting depicts an awful human tragedy: A human leg emerges from the water at lower right, where seabirds and fish are already swarming around the drowning victim, preparing to feed on the body. At the middle left, several more hands shoot up from the water, while yet more drowning victims sink beneath the surface.

But only after looking yet more closely — seeing the manacled ankle at the right, and the other iron chains dropping into the water — and reading the full title of the painting, does the full horror of the scene become apparent. The drowning people in the foreground were captives aboard the slave ship visible in the distance; they have been thrown overboard to their deaths as the ship flees the oncoming typhoon.

Turner’s sublime 1840 painting, titled Slave Ship (Slavers Throwing Overboard the Dead and Dying, Typhoon Coming On), shows the sheer callous cruelty, the monstrous inhumanity of the slave traders aboard the ship in the distance, as well as the terrifying indifference of nature to human existence, in the form of the typhoon that is about to destroy the ship. Viewers are forced to examine their own reactions to the events unfolding in the picture.

From its first exhibition in 1840, the painting’s combination of natural beauty and moral message caused controversy. While the great critic John Ruskin (who owned the painting for 28 years) called it “the best work that has been done in Europe since Sir Joshua Reynolds,” others fixated on the painting’s frenzied energy and seeming physical impossibility (for example, iron chains floating on water) and concluded that it was the work of a madman. William Makepeace Thackeray concluded, “Is the painting sublime or ridiculous? Indeed, I don’t know which,” while Mark Twain wrote, “Most of the picture is a manifest impossibility — that is to say, a lie.”

More recently, postcolonial critics have charged that Turner’s presentation of aesthetic beauty masks an indifference, or worse, to the fate of the drowning victims. Turner, a long 1994 poem by David Dabydeen of Guyana, accuses the painter of a sadistic attitude toward his drowning subjects.

Alex Farquharson, director of the Tate Britain gallery and chair of the Turner Prize committee named after the painter, recently warned the public: “We should not idolize Turner. His investment in 1805 in a Jamaican cattle ranch worked by enslaved labor suggests he had reset his own moral compass by 1840 when he painted Slave Ship as an indictment of the slave trade,” adding for good measure that Turner’s depictions of steam power should be seen in the light of Great Britain’s responsibility for climate change due to the Industrial Revolution.

The painting has been in Boston since 1876, owned first by a wealthy liberal family of abolitionist sympathies, and then, since 1899, by the Museum of Fine Arts there. Although Turner’s Modern World will leave the Kimbell and travel to the Boston Museum of Fine Arts in March, the Slave Ship painting, sadly, did not come to the Kimbell for the show (nor to the Tate, where the show opened before coming to the Kimbell). In fact, it hasn’t traveled since 1999, when a study revealed that further transportation would endanger the artwork.

George T.M. Shackelford, who is now deputy director of the Kimbell, and who is responsible for the Fort Worth presentation of Turner’s Modern World, was chairman of European art at the Boston Museum of Fine Arts when the decision was made to end the painting’s traveling career. “Everybody would love to borrow it,” he says, but the work is just too fragile. So, he says, “the exhibition is coming to it.”

Although the North Texas audience won’t have the chance to see Slave Ship in person, the painting is so central to the 19th century, and so morally challenging, that the Kimbell is presenting a lecture devoted entirely to the painting. James Walvin, an expert on the history of British transatlantic slavery, and Nancy Scott, an expert on 19th century painting, will jointly explore Slave Ship and what it says to modern viewers. Although art lovers might like to lose themselves in pure aesthetic contemplation, Turner’s painting insists that we must at the same time reflect on right and wrong, and the role of art in relation to moral injustice.

Nancy Scott, professor of fine arts at Brandeis University, and James Walvin, professor emeritus in history at the University of York, will speak on “Turner’s Slave Ship: ‘Written upon the sky in lines of blood, girded with condemnation,’” on Jan. 14 at 6 p.m. The online premiere is free on YouTube; no registration is required. For more information, visit kimbellart.org/event/friday-evening-lecture-8. The lecture will be available on YouTube (youtube.com/KimbellArt) following the date of the event.