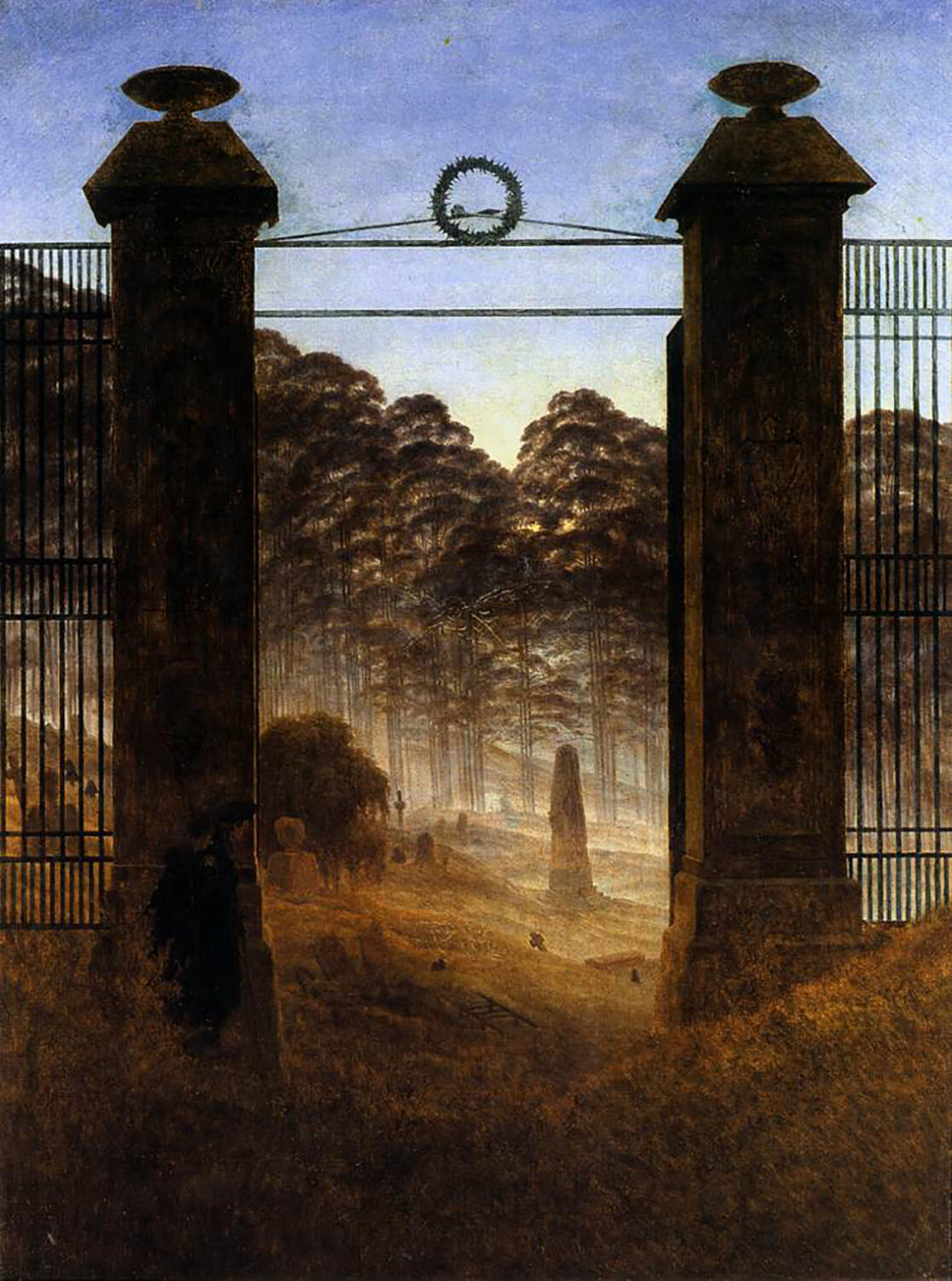 
When friends and family have checked in on me these past months, I’ve occasionally told them I’m worried about my heart. With a job in the news, I spend my work weeks consuming headlines and statistics about COVID-19, and I’ve become alarmingly less shocked and saddened by the toll the pandemic has taken even as we neared and then exceeded a death toll of 200,000 people in the United States.

I find it difficult to truly comprehend that number alone—let alone the pain of the many millions who miss them. As health experts are telling us that habituation to horror is not only bad for the heart but perilous to our collective health, there is one painting I’ve turned to in order to try and feel what has been lost and to find hope: Caspar David Friedrich’s The Cemetery Entrance (1825).

Before I saw The Cemetery Entrance, I simply knew Caspar David Friedrich as the German Romantic  painter of the overpowering landscapes that felt so vast that they dwarfed even the largest of the concerns of my individual world. For the entirety of my senior year in college, his dark, humbling Monk by the Sea (1808–10) was my laptop screen background and my source of calm when I was contemplating my uncertain future.

Friedrich’s work has a sense of awe that I knew would serve as a strong antidote to my current anxiety. So, during the beginning of quarantine, I started browsing his archive online. But I almost passed over The Cemetery Entrance, thinking, “Where is the awe in this brown graveyard?” Unlike his other work, this painting didn’t thrill me in the first two seconds of looking. Instead, encountering The Cemetery Entrance was a spiritually moving game of “I Spy.”

First, I spied the faint outline of an angel flying toward the viewer through the gate. Then, after studying the painting for 15 minutes, I saw what appeared to me to be two wingless angels, or spirits, lying close to the hillside. It was such a pleasure to find things I’d missed on my first glance at the painting. My curiosity deepened and slowly turned to obsession. The Cemetery Entrance quickly became a new treatment for my pandemic-numbed brain. 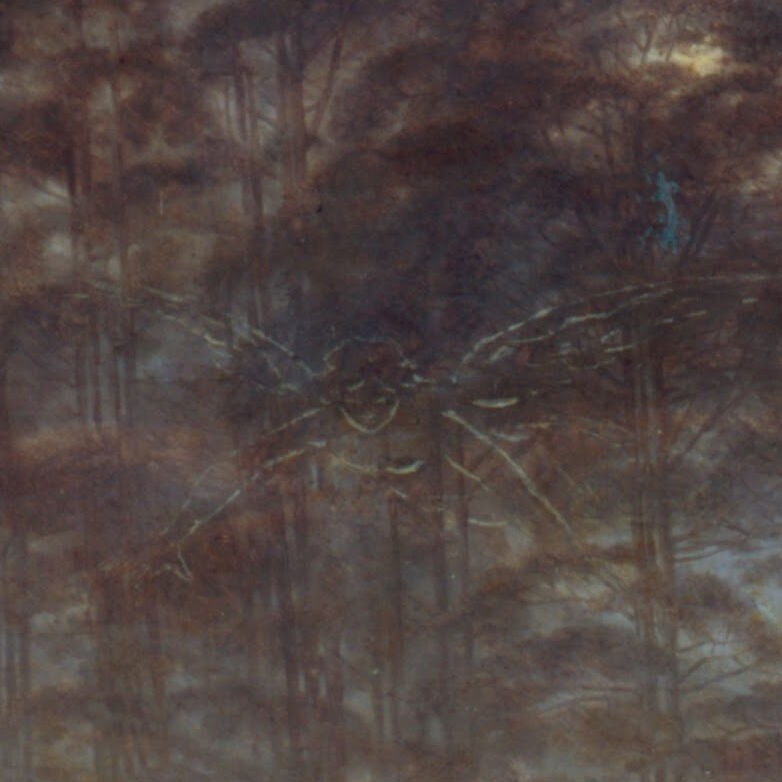 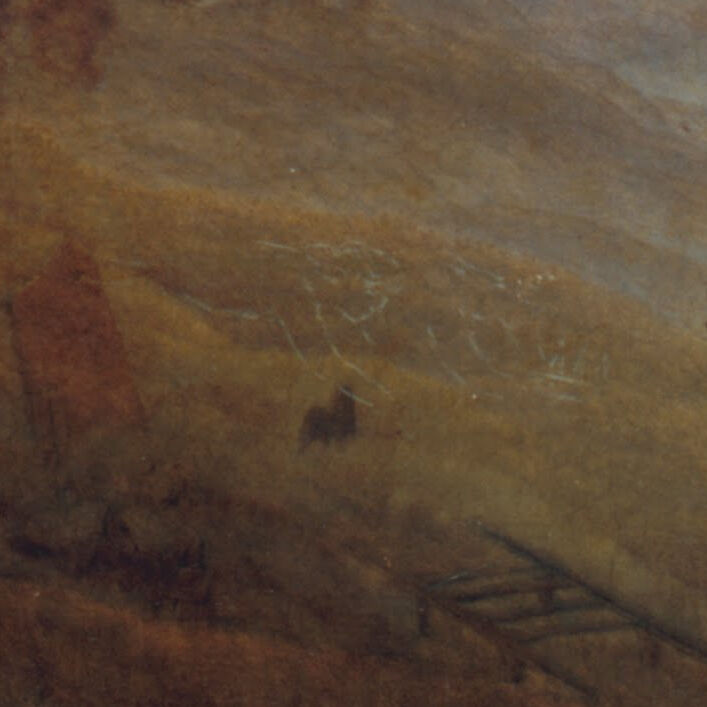 After reading the Friedrich biographies available for free online, I discovered that he was heavily acquainted with tragedy. By the time Friedrich was 17, he’d lost his mother and three of his siblings—one of whom drowned trying to save Friedrich after he fell through ice (a fact that makes his work The Sea of Ice, 1823–24, more horrific). When he was in his mid-forties, one of his closest friends was murdered while out for a walk. Yet, according to scholar Wieland Schmied, Friedrich managed to think of death as “the very gateway to existence.”

The Cemetery Entrance might be his best visualization of that belief. First, because every element is defined by that massive frame: the open gate between life and death. In his rolling fog, everything from the mourners to the thin trees looks like it could be in the middle of a phase change. Second, because Friedrich put his soul into this painting. And I can feel it. The titular cemetery of The Cemetery Entrance was a composite of Trinity Cemetery, the place he’d eventually be buried in 1840 (15 years after he started the painting), and a revealing slice of his inner landscape.

Friedrich thought a painting wasn’t art unless the painter brought what he saw inside him and not simply outside his window. Friedrich’s personal process started with sketching trips where he drew hundreds of details that caught his eye—tree limbs, moons, sailboats—and then he returned to his one-window studio to place the pieces into his own imagined spaces. To Trinity Cemetery, he added the rolling hill and, significantly, the numinous outlines or angels. To me, the result is a considered, stunning reminder of impermanence that Friedrich managed to fix.

I’m obsessed with this painting because Friedrich managed to put grace at the center of it. I’ve asked many questions of the angel in the middle: Where is it coming from? And is it headed to the mourners at the gate or straight out to me? The mystery of it is hard to leave be. Still, even though I’m not a religious person, I think a lot of people could use an angel right now—or even the mere suggestion that one could exist.

What The Cemetery Entrance does, more than anything, is make me face and fear my own mortality. And after I gaze at Friedrich’s piece and let myself feel that fear, I return to my life with new urgency. I remember what a blessing and a thrill it is that I and most of the people I love are still alive. This painting is Friedrich’s invitation for the viewer to think of death as a way into deeper living—to live your life with your heels dug a bit further into the dirt. And, on good days, I’m able to accept that invitation, look at this graveyard, and feel grateful for the time I’ve been given.