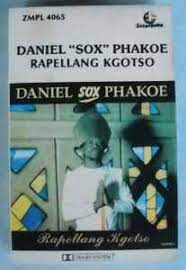 Bubblegum musician Daniel Phakoe, better known as Sox, who shot to fame with the song Don’t Call me Lejapere, died yesterday at his Tembisa home after a long illness.

A neighbour, who did not want to be named because he is not allowed to speak to the media, said Sox had been moving in and out of Tembisa hospital for a while.

“He was  complaining of high blood pressure and liver disease. His blood pressure has always been high. His liver was also troubling him,” said the neighbour.

Another neighbour said Sox’s family was devastated by his death.

“We found him dead at his house in Maokeng section where he was living alone. We immediately informed his family and relatives. They too were devastated. So we don’t know whether he is going to be buried here or in Kroonstad in Free State, where was born. The family will decide,” said the neighbour, who also did not want to named.

“I’m devastated,  the industry has lost another legend in him. Our legends are perishing. May his soul rest in peace,” he said.