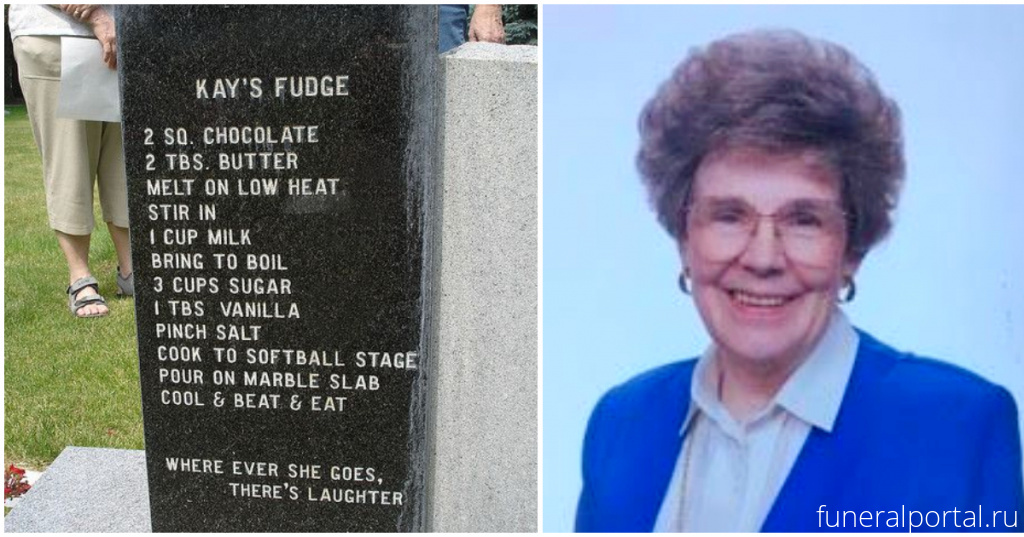 A woman has got her homemade fudge recipe printed on her gravestone. Take a look:


A woman has literally taken her homemade fudge recipe to her grave - it's printed on her tombstone!

Kathryn Andrews (Kay) is buried alongside her husband, Wade, at Logan Cemetery in Utah. She has gained quite a lot of attention around the world after images of her grave were shared online. Her tombstone has the dates of her birth and death but there is also an unusual addition - the recipe of her homemade fudge.

Kay's daughter Janice Johnson said that her mother "really loved people" and would whip a batch of her special homemade fudge whenever there was a get-together, Fox13Now reported.

Kay met Wade at a church function in New York and they got engaged during World War II. They went for just one date before Wade, who was a US Air Force Captian had to leave for the war.

When Wade passed away in 2000, Kay helped select the images which represent him on one side of the headstone she now shares with him.

Her children suggested that she should also be represented on the grave and she decided to share her fudge recipe.

She was aware of the growing popularity of the headstone before her demise in 2019 and was pleased it brought a smile to many.

Here's the recipe of Kay's fudge:

Beneath the recipe, the gravestone reads, "Wherever she goes, there’s laughter."

A photo of the headstone has gone viral on social media, with one user saying, "This makes taking it with me to the grave literal."

We tried the famous fudge recipe engraved on a late grandmother's gravestone
https://www.today.com/food/kay-s-fudge-we-tried-recipe-engraved-utah-woman-s-t220600

Grandmother Includes Recipe On Her Headstone So Her Famous Fudge Lives On After She's Gone
https://crafty.diply.com/6491177/grandmother-includes-recipe-on-her-headstone-so-her-famous-fudge

Kay's Fudge Recipe - The tombstone is a Marble slab and this photo was... #funniness #laugh #grin #jolly pic.twitter.com/HTS50SeT7p