Hawaii. Why An Artist From New York Chose To Die In A Maui Forest In 2009, Deborah Anne McNeely died alone in a solar-powered hut she erected deep in the Maui jungle. Five years passed before her remains were discovered.

McNeely’s sojourn to Hawaii, and her eventual disappearance, is part of a trend of people who go missing in the islands while trying to retreat from society or fulfill some spiritual quest.

Years later, the circumstances of McNeely’s disappearance have become clear. But there are dozens more missing person cases in Hawaii that remain mysterious. 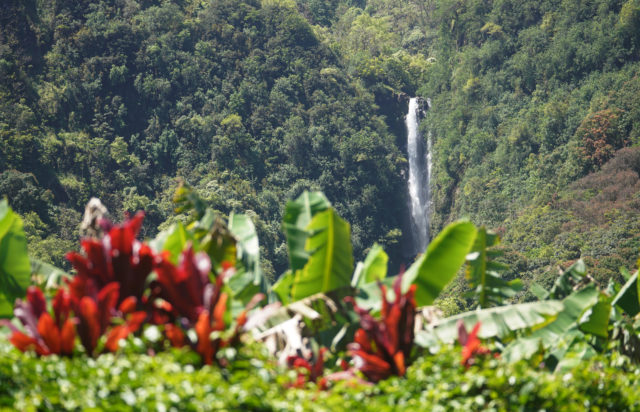 This waterfall in Wailua, Maui, is in the general area where Deborah Anne McNeely built a shack in the jungle and lived out her final days. Cory Lum/Civil Beat


A visual artist living in New York, McNeely would from time to time throughout her life break off from the monotonous world and travel to some artist’s retreat, apprenticeship or colony. She tried living in a sustainable farming community in Virginia. She briefly joined a cult.

These stints of personal freedom always came to an end, however, when McNeely depleted her funds. She’d return to her rented Manhattan apartment, resume her low-wage job and continue to slog through the months.

McNeely was 49 years old when she had saved enough money to cut herself free again, this time for a sojourn to Maui.

She initially joined an off-the-grid farming community in Haiku, according to McNeely’s niece Maggie Messitt. But she soon decided she was equipped to get along in the jungle by herself. She left the farm and began building her own shanty elsewhere in the east Maui wilderness.

“The reason she had gone to Maui was sort of a last chance to look for something, to look for a place where she could sort of be herself.” — Maggie Messitt, Deborah Anne McNeely’s niece

McNeely wrote about the home she was building in letters to her family. It was a house of tree branches, rope and tarp. It had a solar panel, which allowed her to charge her cell phone.

She filled her days with making art, reading religious texts and tapping into local listservs for gay women. It was an intentional, unbridled existence.

Then one day McNeely missed her weekly phone call with her sister, which tipped off the family that something was awry.

A family member flew to Maui to open a missing person’s case with police. Luckily, McNeely surfaced. But she was frail and weak. 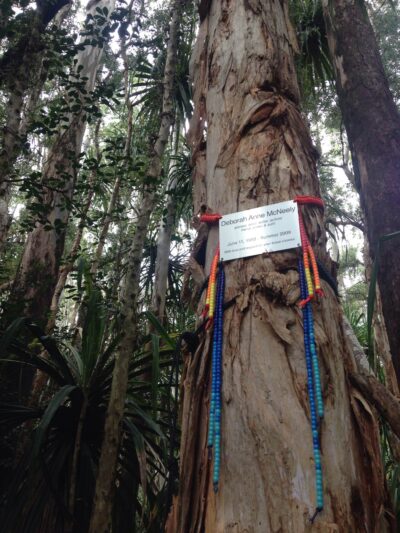 Deborah Anne McNeely died in 2009 in the Maui jungle where she lived out the last year of her life. On a eucalyptus tree that had served as a structural anchor for her makeshift home, McNeely’s nieces fastened a memorial plaque declaring love and respect for McNeely’s “brave choices.” Courtesy: Maggie Messitt


McNeely explained to her relative that she had been fasting. Then she retreated to her tiny home cloistered by neon green ferns and dense trees.

Maui police closed the case. But no one ever heard from McNeely again.

By the time McNeely’s niece Messitt arrived on Maui, it was a recovery mission. She hired a private investigator who conducted a grid search to find McNeely or her jungle hideaway. Nothing materialized.

The absence of evidence was enough, though, to declare McNeely deceased, although for years her sister continued to file her taxes, just in case.

Messitt, on the other hand, knew her eccentric, brilliant aunt was gone.

Five years after McNeely vanished, a pig hunter and his dogs found a skeleton on east Maui’s jungle floor. It was night, and the bones, unmistakably human, spooked the hunter.

It took nine months for a DNA test to confirm that the bones belonged to McNeely.

Messitt has since hiked several times to the patch of jungle where McNeely lived out her final days.

So much of her aunt’s life had survived seasons of heavy rain and the passage of time: books on world religion, cut-outs of crosses, dolls made of scrap fabric, clothing, cutlery, the solar panel.

“She made it clear that the reason she had gone to Maui was sort of a last chance to look for something, to look for a place where she could sort of be herself,” said Messitt, who is writing a book about her aunt’s life. “And I think that she had one of the best years of her life on Maui and she knew it was going to go downhill from there because she couldn’t keep it up forever.”

At 51 McNeely couldn’t fathom relinquishing the joy and freedom she’d finally attained to return to a life that stifled her spirit, Messitt believes. So she fasted herself to death, Messitt said, perishing sometime in the summer of 2009.