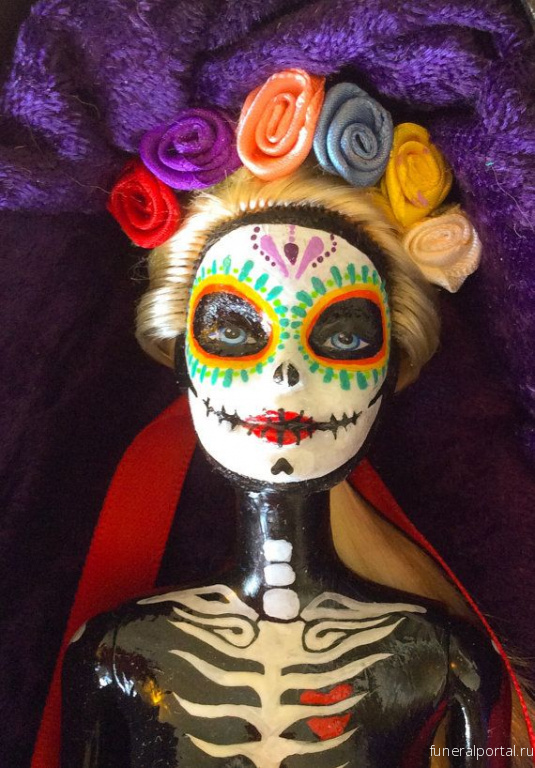 
This year, Mattel is celebrating Día de Muertos, or Day of the Dead, with a brand-new doll that promises to be the crown jewel of any Barbie collection.

The company introduced a special edition Barbie for last year’s Día de Muertos, and the doll was so popular that the company decided to make it an annual event. For designer Javier Meabe, this meant creating a new figure that stayed true to the traditions of the holiday without looking too much like the inaugural doll.

“Adding new textures, fabrics, flowers, and a new dress silhouette were ways to introduce the new elements to the second doll while still keeping traditional elements that are important to the Día de Muertos celebration,” Meabe said in a press release. “Traditions like marigolds, skeleton details, and Calaveras makeup were elements that I knew we had to keep but introduce in a new way.”

Can you spot all the calaveras on her skirt?  MATTEL, INC.


As Romper reports, the 2020 doll flaunts a pale pink lace hoop skirt underlaid with a colorful floral pattern (interspersed with a few skulls). Her braided updo features flowers to match, and her makeup is painted to emulate the beautiful calaveras, or decorative skulls, that are seen at many Día de Muertos celebrations. Last year’s Barbie, on the other hand, has two long braids with blue highlights, and she wears a black trumpet-flared gown adorned with butterflies and flowers.

Last year's Barbie is sold out at most retailers.  MATTEL, INC.


Both dolls capture the festive nature of the Mexican holiday, when the souls of the deceased are said to return to their families for a music- and food-filled fête. It begins at midnight on Halloween—the souls of children arrive first, and adults follow 24 hours later—which gives you plenty of time to get your Día de Muertos Barbie doll. Mattel is releasing it on October 2, and you can pre-order it for $75 here.

Now Barbie Dia De Los Muertos Doll or Day Of The Dead Doll is available to buy online and in stores
https://thenewscrunch.com/now-barbie-dia-de-los-muertos-doll-or-day-of-the-dead-doll-is-available-to...