Julian Bream: 'I'm a better musician now than when I was 70' Next week classical guitarist Julian Bream will receive the Gramophone lifetime achievement award. He talks to Stuart Jeffries about success and learning to let go 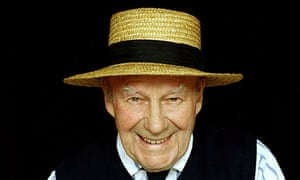 
Two years ago Julian Bream was walking with his retriever, Django, in the fields around his Dorset home, when a neighbour's dog knocked him to the ground, breaking both hips and injuring his left hand. For several years, Britain's greatest virtuoso of guitar and lute had played through the pain of arthritis, but these new injuries compelled him to renounce making music seriously. He had retired in 2002 after 55 years of professional performing, but still liked to give the occasional recital at churches or halls near his home.

Thus ended his longest affair, one that started when nine-year-old Julian put on one of his dad's Quintette du Hot Club de France LPs and was seduced by what he calls the "burning anguish" of Django Reinhardt's playing.

How much are you playing these days? "Not at all. There's nothing sad about not playing any more," says Bream, who turned 80 in July. But in the next breath he adds: "The thing I feel a little annoyed about is that I know I'm a better musician than I was at 70, but I can't prove it."

Next week, Bream will receive the prestigious lifetime achievement award at the Gramophone awards (previous winners include Claudio Abbado, Janet Baker, Alfred Brendel, André Previn). And while he says the body may be weaker, he also suggests that his critical faculties are more discriminating than ever. "I became much more critical in the last decade, of phrasing and tempo and general musical interpretation."

It's not quite true that Bream has stopped playing, but these days, instead of the practice sessions lasting more than four hours he maintained for decades, he restricts himself to a few daily arpeggios or scales. "The whole idea is that I believe it's very good for one's brain and muscular system to work in harmony. If you keep up your playing it just keeps things ticking over."

We're sitting in Bream's living room, and during our two hours together Bream only produces a guitar once – and then only at the photographer's request. He painfully picks out a few notes.

"I devoted my life to music for a reason," he says, "and the reason wasn't because I wanted to get on or make money, but to try to fulfil myself and also to give people pleasure. That's been my credo."

That shouldn't suggest that Bream is discontented with his lot. "The last 10 years of my life, from 70 to 80, have been the most interesting because I have only done what I wanted to do. I have cut away what I call the excess stuff in my life. I'm quite reflective – I listen to music, I read, I walk with Django."

In 2008, he sold Broad Oak House, the sprawling Wiltshire farmhouse he had lived in since 1966, with its 30 acres, stables, rose and vegetables gardens, his collection of classic cars, and the acoustically refined stone summer house where he would practise.

To show me what that lavish, gregarious time of his life was like, Bream takes a DVD from his new 43‑disc box set, The Julian Bream Collection, which Sony is releasing this month to coincide with his 80th and the lifetime achievement award. This DVD is of his 1976 BBC film, A Life in the Country, made at Broad Oak House. There is footage of him playing badminton in the garden with composer Hans Werner Henze, trouncing his friend and fellow guitar virtuoso John Williams at table tennis, and stringing up cricket nets so his team of arty friends could prepare to be thrashed by the local village team.

Now that lavish lifestyle has been pruned back. He lives in a little bungalow in Donhead St Andrew, a few miles from his former home. The classic cars and most of the guitars have gone. He no longer smokes, and he drinks so little alcohol that he insists we leave with a bottle of German whisky a recent interviewer brought as a gift; and lives alone but for his 11-and-half-year-old black retriever.

From beneath the broad-brimmed boater he wears even indoors Bream beams. "I've had a lovely life. I've had a great life." He switches to third person. "You're preparing yourself." By renouncing the world as Buddhists recommend? "Letting go, yes, but in a controlled way."

Not quite a musical autodidact, Bream picked up his first guitar chops playing along to dance bands on the radio. His father, a commercial illustrator and jazz band guitarist, bought him his first classical guitar when he was 11, and the pair set about working through tutorial books.

Was he a child prodigy? "Not really." Some might think otherwise. At 12, he played at the London Philharmonic Society of Guitarists; the principal was so impressed that he agreed to teach Bream and later arranged for him to meet and play with Andrés Segovia, the great Spanish virtuoso. At 13, he made his professional debut in Cheltenham. At 15, he was already a seasoned recitalist and won a full scholarship at London's Royal College of Music where he studied, not guitar (the instrument, he maintains, was frowned upon), but piano and cello.

"I was mostly self-taught on guitar and that had its benefits. It's a great thing to work through problems on your own."

One day in 1947, his dad was walking down Charing Cross Road and met a sailor carrying a lute. It would become a key moment for British postwar music. "He asked: 'What is that?' The sailor told him. 'How much?' 'Couple of quid it's yours.' " He gave the instrument to Julian, who repaired and mastered it. Long before Sting fingered his first lute and crooned his first Dowland, Bream was the instrument's postwar pioneer.

The lute chimed with the young Bream's intellectual interest in the history of Tudor England. He shared his passion for Elizabethan music with the great tenor Peter Pears, whom he met with the latter's lover and musical partner, Benjamin Britten, in Aldeburgh in 1952. Bream replaced Britten as accompanist in Pears's recitals of Elizabethan songs, and during the 50s they toured the world and recorded together, often while Britten remained in Suffolk composing.

By the late 50s, and only in his early 20s, Bream had established himself as a professional lutenist and guitarist, readily able to commission new pieces from composers. In 1960, he established the Julian Bream Consort, a period-instrument ensemble with Bream as lutenist helping to intensify the revival of interest in music from the Elizabethan era.

But it was Britten's Nocturnal after John Dowland (1963) for solo guitar that made Bream's name and compelled sceptics to take the instrument seriously in Britain. "The Nocturnal was very nearly beyond me. I went to Robert Graves's house in Majorca and there, in the middle of an olive grove, he had a shepherd's hut where I retreated for 10 days to practise the Nocturnal. It was such a responsibility – to Ben, to myself, and to the guitar."

Britten's Nocturnal encouraged many other eminent composers to write for Bream, helping effect a renaissance in the guitar repertoire. In 1964, he was awarded the OBE for his services to music. By then, he had won the first of four Grammy awards in the US. In the 70s, 80s and 90s, he became one of classical music's bestselling and most prolific recording artists.

Bream drives us back to the railway station. We pass the railway bridge where he crashed in his open-top MG in 1984, smashing bones in his right elbow and making him fear he would never play again. Instead, he relearned how to play the guitar and three months later did a US tour with "various nuts and bolts" in his arm. "In those days, I had the discipline to come back from the brink of – well, annihilation is putting it too strongly – but of the end of my career. I refused to let go."

And now? "Now it's time to let go, to enjoy what's left." He waves us off and drives back home to his beloved Django.

• The 43-disc Julian Bream Collection is released this month by Sony. He will be awarded the Gramophone lifetime achievement award on 17 September. Details: gramophone.co.uk. Glenn Gould: A Musician for Our Times