The idea is not to erase history, but to contextualize it.


Statues and monuments—from Columbus to Confederates, presidents to priests—are heatedly being removed, defaced, or destroyed. Police actions and popular protests have rekindled debates over American history that can be informed by how other countries have managed their tortured pasts and controversial memorials.

Ironically, lessons from former communist countries such as Hungary and Russia can be instructive.

Budapest’s Freedom Square hosts a prominent and controversial Soviet war memorial. Hungarians regularly argue for its removal, but it remains unmoved and guarded. It is an exception.

The bulk of Soviet-era statues in Budapest and in countries once behind the Iron Curtain have been removed, relocated, and reinterpreted. The idea is not to erase history, but to contextualize it.

In Budapest, Freedom Square’s remaining monument is a fenced-off reminder of the Soviets’ World War II liberating army. The obelisk sits next to the U.S. Embassy, just below the American ambassador’s window. Unlike other Soviet monuments in the city, a treaty guarantees this one’s place, preservation and protection.

Other Communist monuments in Budapest, however, have been removed and relegated to a final resting place outside town in Memento Park. The park boasts “the biggest statues of the Cold War” and shows how to reinterpret a nation’s painful past. Supersized statues of Communist-era commissars stand quietly in the elements. Stalin’s empty boots. A lunging Lenin. A modernist bust of Marx. A museum barracks full of educational material puts the era and objects into complete and nuanced context. School groups and tourists visit regularly.

Hungary’s President Árpád Göncz at the time hailed Memento Park’s creation for its measured approach. Göncz said it “utilizes politically neutral means of art to emphasize the dignity of democracy and the responsibility of historical thinking.” America could use its own Memento Park to present and interpret Confederate symbols of a resoundingly defeated past. Historic context creates a cold understanding of the past, countering mythology and revisionism.

Countries throughout Eastern Europe have moved their monuments from prominent pedestals to out-of-the-way detoxified destinations. Tallinn, Estonia has an outdoor garden of bronze and stone sculptures strewn helter-skelter at the Maarjamäe Palace. It’s disarming to see a larger-than-life Stalin dumped on his back or Lenin’s brutal bust resting its chin on overgrown lawns.

In Prague, a Soviet IS-2m heavy tank on a massive stone block was erected to honor the Soviet mechanized divisions who fought Nazi forces and helped free Czechoslovakia at the end of WWII. Soviet tanks, however, also reminded Czechoslovaks of a pernicious recent past — they were used to put down the 1968 Prague Spring uprising. Following the 1989 Velvet Revolution, a group of Czechoslovak artists took buckets of paint and visually disarmed the formerly ominous Soviet Tank Square memorial. It became known as the Pink Tank.

Eastern European nations found it easier to remove the Soviet symbols and statues of their occupiers and oppressors, but even the Russians themselves put lots of their Soviet-era monuments out to pasture. Shortly after the 1991 Moscow coup that tried to overthrow President Mikhail Gorbachev and helped end the Soviet empire, statues of former heroes, ruthless functionaries and self-aggrandizing leaders were taken down. Soviet sculptural detritus was moved to Gorky Park’s “Graveyard to Fallen Monuments.” In its stillness, the Fallen Monuments park still arouses dread—infamous figures such as “Iron Felix” Dzerzhinsky, who founded the Soviet secret police, stir strong emotions.

Despite Eastern Europe and Russia’s rapid monument removal following the upheavals at the end of the last century, there are now movements to resurrect the past, rehabilitate the rotten and re-litigate history. In Russia, some of the Sovietica is being salvaged and Stalin is being painted positively by Russian President Vladimir Putin.

Budapest, too, is a perfect example of how expediency and opportunism drive politicians and parties to leverage symbols of the past to score popular points today. While a national consensus continues to revile its Soviet past, there is also a movement to use symbolism and a redacted past to rewrite a new national narrative. Freedom Square is now home to a controversial memorial that seemingly absolves Hungary for its Holocaust role, portraying the entire country as victim. In the history game, it is always easier for countries to blame others for their fate, but harder for a nation to face its own past squarely.

The good news? Freedom Square also hosts a striding, sunny Ronald Reagan statue moving confidently toward the still-standing Soviet obelisk. A nearby Budapest tech park privately put up a statue of computer visionary and Apple founder Steve Jobs. In Hungary, enlightened modern history seems in a race to outweigh and out-monument the past.

The United States may be in a similar race. The Smithsonian Institution is the world’s largest museum and research center and the premier place for contextualizing U.S. history and storing fallen statues. The Smithsonian’s new leader, Lonnie Bunch, would be the perfect caretaker and curator. Bunch was previously the founding director of the National Museum of African American History and Culture—could he oversee a way out-of-the way “Memento Park DC”?

Markos Kounalakis is McClatchy’s foreign affairs columnist, a visiting fellow at the Hoover Institution, and the author of Spin Wars and Spy Games: Global Media and Intelligence. He is president and publisher emeritus of the Washington Monthly. 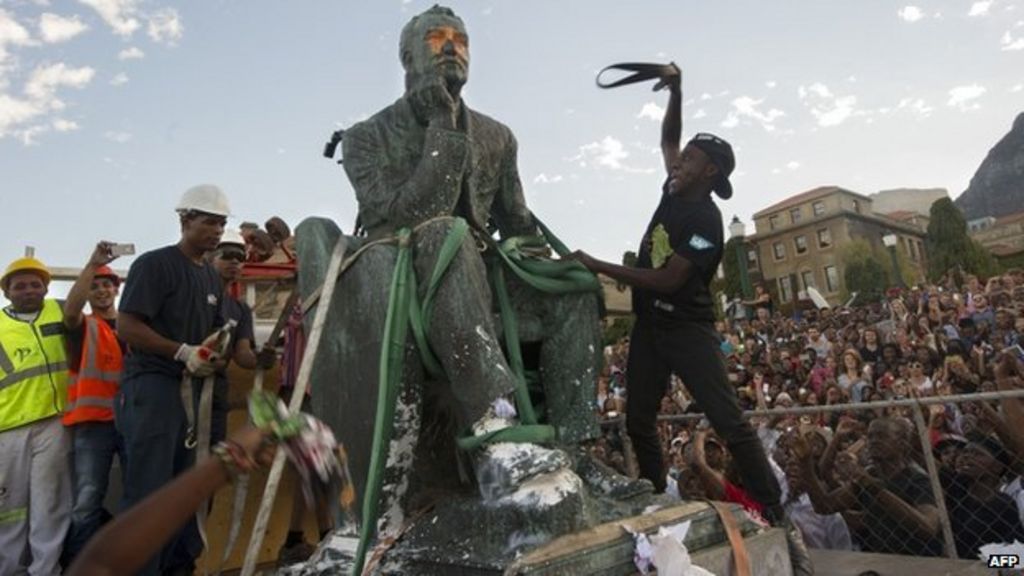