EDINBURG, Texas (Border Report) — An interactive art exhibit on display in South Texas features toe tags depicting where 3,200 undocumented migrants have died while trying to cross the desert into Arizona.

The exhibit, Hostile Terrain 94, is currently on display at the University of Texas Rio Grande Valley at the campuses in Edinburg and Brownsville, Texas. 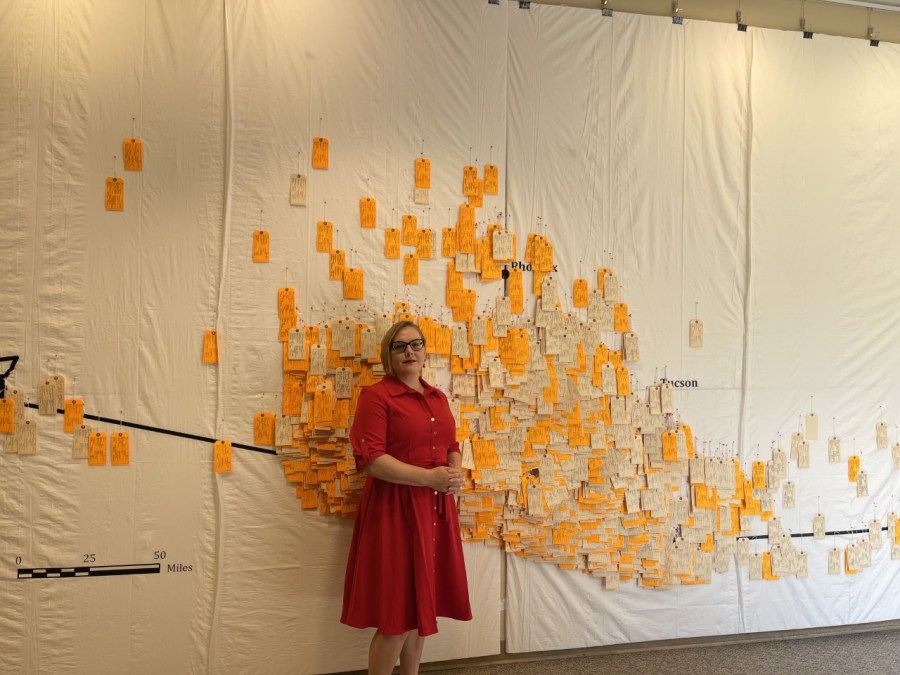 It is data-driven art that is part of the Undocumented Migration Project, a nonprofit research organization directed by anthropologists to highlight migrant remains. It combines the geographic location of where the migrants died with community participation to create massive wall-sized pieces that are put up throughout the world.

UTRGV joins about 150 institutions on five continents to display the exhibit, which is put up with the help of community and student volunteers who manually fill out the location, date remains were found, and, if available, the name, age and country of origin of the deceased migrants.

In doing so, it helps to personalize the migrants and make them more than just a number, Dr. Sarah Rowe, an associate professor of anthropology at UTRGV, told Border Report.

“The Hostile Terrain 94 exhibit is a sort of moment of remembrance and to document those individuals who have died during migration to the United States,” Rowe said this week as she walked through the exhibit hung up in the library at the Edinburg campus. 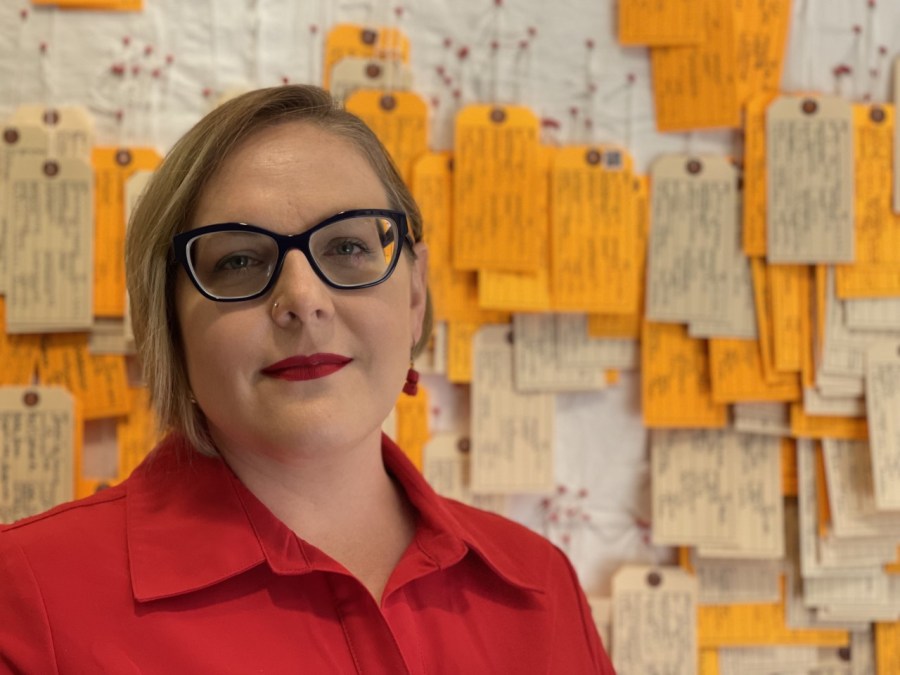 UTRGV Associate Anthropology Professor Dr. Sarah Rowe pinned the exact location for all 3,200 migrant remains that were found in the Arizona desert for the Hostile Terrain 94 exhibit. (Sandra Sanchez/Border Report)


The exhibit was designed by anthropologist Jason De Leon of UCLA who was inspired by data of remains found scattered throughout the border region in Arizona. A majority of deaths were driven by a change in immigration policy implemented in 1994, which is why the exhibit is called Hostile Terrain 94.

“The 94 in the name of the exhibit refers to the year when a border policy called Detention Through Deterrence was first enacted. And, what this policy did was beef up enforcement around urban areas in order to push undocumented migration into less populated and more rugged terrain. So, in the case of the Arizona border that means the Sonoran Desert,” Rowe said. 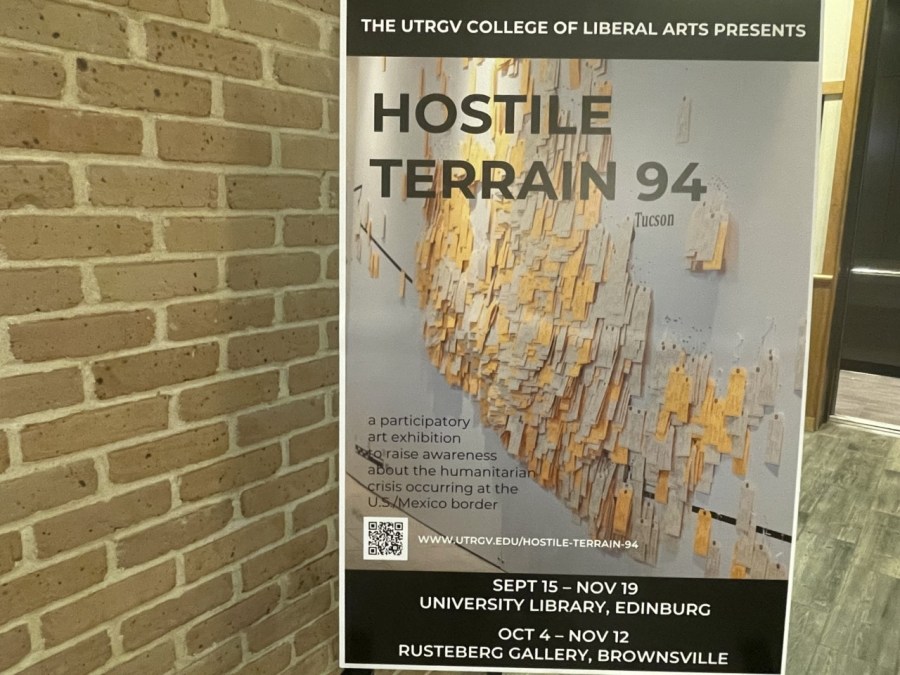 The exhibit is on display at UTRGV in Brownsville until Nov. 12 and at the Edinburg campus until Nov. 12. (Sandra Sanchez/Border Report)


The toe tags are color-coded. Identified remains are on manila tags; the unidentified are on orange tags.

In filling out the 4-inch tags, community members and students from the Rio Grande Valley sometimes also added personal messages to the back of the cards.

Messages included: “May you rest in peace;” “You’re in heaven now;” “Fly With the Angels;” and “You’re not Forgotten.”

“No matter what your feelings on immigration are, these are lives and sometimes it can be really easy to forget that when we hear about the numbers that are involved,” Rowe said.

In some parts of the desert map, hundreds of tags are layered atop each other. 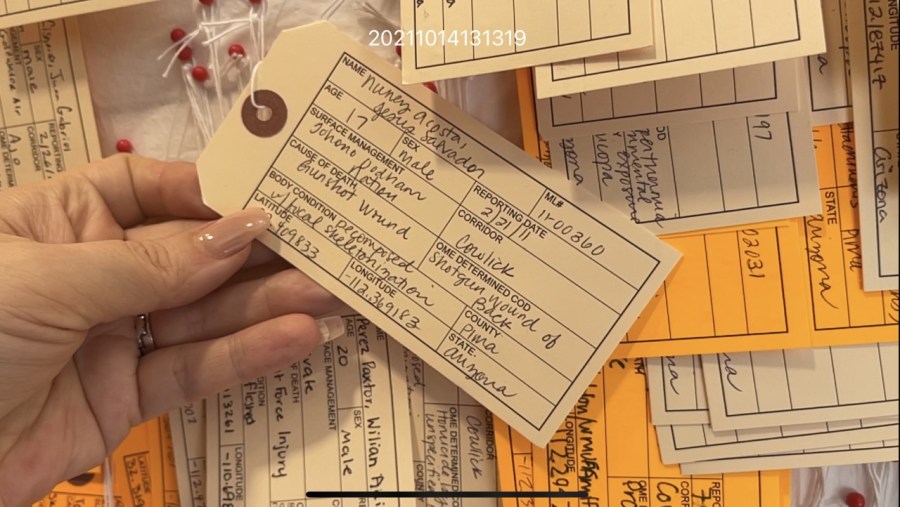 One tag is of Jesus Salvador Nunez Acosta, age 17, who was found on Feb. 21, 2011, on the Tohono O’Odham nation in southern Arizona. His skeletal remains had a “gunshot wound,” and according to the tag he was shot in the back. When his skeletal remains were found they were “decomposed.”

An interactive online component to the exhibit also allows visitors to scan QR codes to watch and hear video from family members of some of the deceased, as well as project organizers.

“Seeing and reading how each one died definitely brings a different sense of it all,” Rowe said.”Here we have the end of their story but we don’t have the context of their story. We don’t have any sense of the hopes they had for the future or the hardships they faced in the past. So that part of it is still missing. But this is what 25 years of a single immigration policy has brought us to.”

Visit the BorderReport.com homepage for the latest exclusive stories and breaking news about issues along the United States-Mexico border.

The project encompasses data of migrant remains dating back to the mid-1990s. And, it is only for Arizona, which has an organized centralized reporting system for migrant remains that makes it easier and more comprehensive to document.

Texas does not have any such system and to get such data would require calling every coroner’s office and municipality, Rowe said.

Rowe said the exhibit took three weeks to fill out the cards and pin up in Edinburg. It was a bit quicker at the Rusteberg Gallery in Brownsville, which is on the UTRGV campus.

The Politics of Migrant Death at the Arizona-Mexican Border
https://youtu.be/UMDGLNZRpes