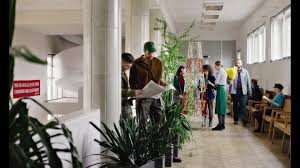 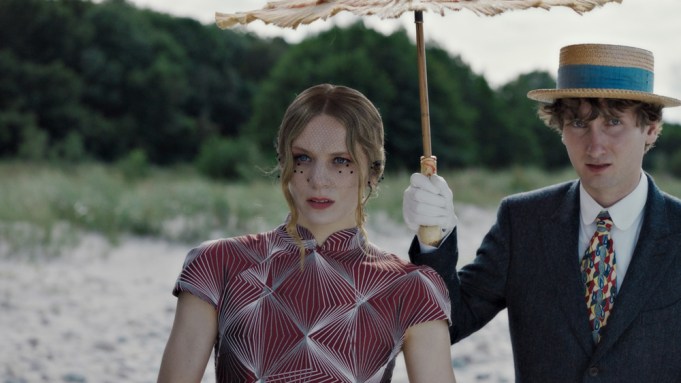 The film, which screened as part of the Berlinale’s Encounters section, was written and directed by Julian Radlmaier.

Radlmaier’s script was praised by the jury as being “extravagant, bizarre, and hilarious” when he was presented with the Golden Lola for Best Unfilmed Screenplay during Berlinale 2019.

Set in 1928, the film centers on a penniless Soviet refugee, who falls in love with an eccentric young vampiress, played by Lilith Stangenberg (“Wild”), spending the summer at the seaside with her awkward servant.

Soviet factory worker Lyovoshka is cast to play Trotsky in a film by Sergei Eisenstein. But his dreams of a new life as an artist are shattered when the real Trotsky falls out of favor with Stalin and Lyovoshka is cut out of the film. He flees his communist homeland and wants to try his luck in Hollywood. For now, however, he’s stuck in a swank German Baltic resort. Disguised as a persecuted aristocrat, he tries to get money for the passage to New York by pickpocketing.

During one of his forays, he meets the young factory owner Octavia Flambow-Jansen, who spends the summer at the seaside with her servant Jakob. The eccentric millionairess is intrigued by the mysterious refugee and offers him shelter in her luxurious mansion. He quickly falls in love with his dazzling hostess, much to the chagrin of the awkward Jakob, who also has a crush on the boss. A light summer romance is on the horizon—too bad that thirsty vampires are terrorizing the area. To make matters even worse, even Octavia herself is a bloodsucker.

Jason Ooi, president at Crescendo House, stated: “The team at Crescendo House was immediately enamored by ‘Bloodsucker’s’ charming wit, and rejuvenated with the prospect of distributing a satire that maintains its comedic appeal while navigating more sophisticated, thought-provoking ideas. It is refreshing to see a proper and open-ended dialectic in contemporary cinema, especially one that does not sacrifice accessibility in allowing its audience to make up their own minds.”

ARRI Media International’s deputy head of sales and acquisitions, Moritz Hemminger, said that Radlmaier is “one of the most exciting young German filmmakers,” and has a “unique cinematic voice.” He added: “We are fully convinced that Crescendo House, being a new, cinephile, and innovative distribution outfit, is the perfect home for our ‘Bloodsuckers’ in North America.”

Radlmaier is a German-French-Swiss filmmaker based in Berlin. He studied at the German Film and Television Academy (DFFB), worked as a personal assistant for Werner Schroeter, and has translated and edited several film-theoretical writings by French philosopher Jacques Rancière. In 2013, his short “A Specter Is Haunting Europe,” which premiered in Oberhausen, received the German Film Critics’ Award. His next film, “A Proletarian Winter’s Tale” (2014), screened at renowned international festivals such as Rotterdam and Viennale, and was awarded at Ficunam Mexico D.F. and Olhar de Cinema (aka Curitiba Intl. Film Festival). “Self-criticism of a Bourgeois Dog” was screened in Rotterdam in Berlin and has received the German Film Critics’ Award as the best debut in 2017. ‘Bloodsuckers’: A crazy vampire comedy made in Berlin
https://marketresearchtelecast.com/bloodsuckers-a-crazy-vampire-comedy-made-in-berlin/32388/