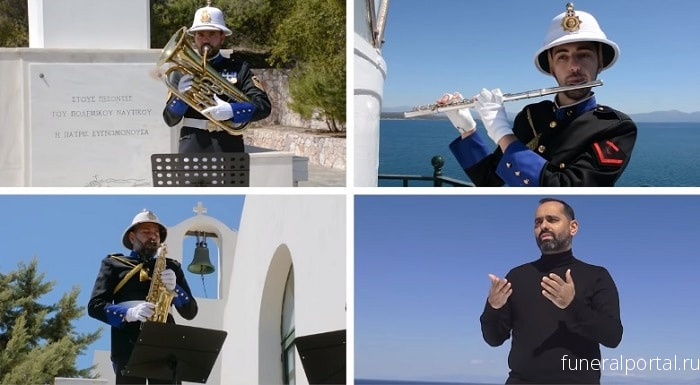 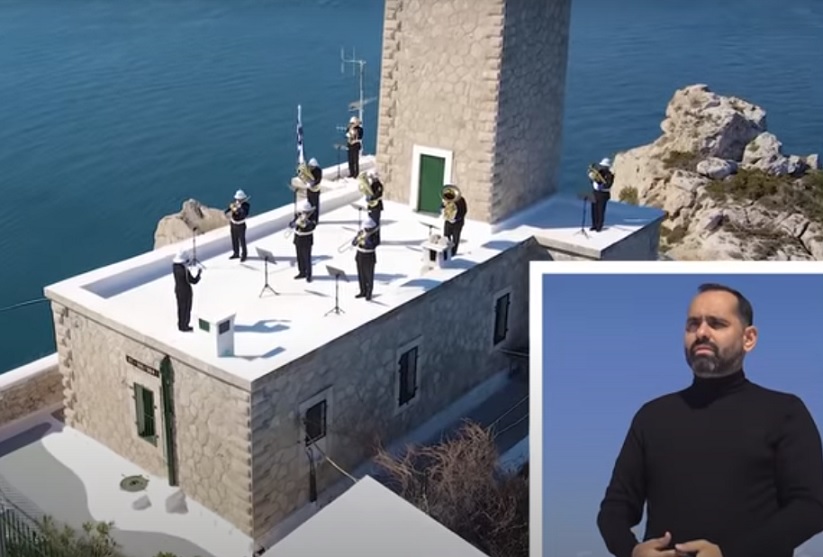 
The Hellenic Naval Band has released a video of their powerful performance of Good Friday‘s best known Epitaph mourning hymn, with parallel sign language interpretation for the hearing impaired.

The excerpt performed in the video is the iconic and deeply emotional “Ai Geneai Pasai” (All the generations), also known as “O glyky mou” Ear (Oh my sweet Spring).

It is one of 185 Egkomia of the Epitaph, which are special Byzantine troparia chanted on Good Friday before the procession of the Epitaph.

The filming of the performance took place at the scenic lighthouse of Melagavi, near Loutraki, in the Gulf of Corinth, built in 1897.

Founded in 1880, the Hellenic Naval Band was the first musical unit of the Hellenic Navy. It initially consisted of 22 volunteer musicians. After the Balkan Wars, the number of musicians increased through the expansion of the Navy and the enlistment of new volunteers.

Its expertly trained military musicians perform at major state events in Greece on behalf of the Hellenic Navy, as well as on radio and television, and they participate in International Military Music Festivals across the world.

Good Friday reminds the faithful of how Christ was betrayed and arrested, about his interrogation and humiliation, his death sentence delivered from the High Priests and Pilate, and Peter’s denial and repentance. It also recounts Christ’s road to Calvary, as well as His crucifixion, death, and burial and the sealing of His tomb.

Throughout the night hours of Holy Thursday, the faithful decorate the Epitaphs in each parish, representing the coffin of Christ, with spring flowers —mostly white, red, and purple— until entirely covered.

The Epitaph is also often sprinkled with flower petals and rosewater, decorated with candles and ceremonially censed as a mark of respect. Traditionally, the faithful walk underneath it as a gesture of faith.

In the early morning, Orthodox faithful gather again to pray the Royal Hours — a special, expanded celebration of the Little Hours — in place of the Divine Liturgy. In the afternoon, around 3 pm, everyone gathers again for the Vespers of the Taking Down from the Cross.

In the evening, a joint ceremonial procession of the Epitaphs of each parish in the community takes place, led by the parish priests and followed by women bearing myrrh, altar boys carrying the liturgical fans, and the faithful, holding lit beeswax candles.

In some occasions, a band or choir follows the procession and plays or chants solemn music to express the sorrow of the people.