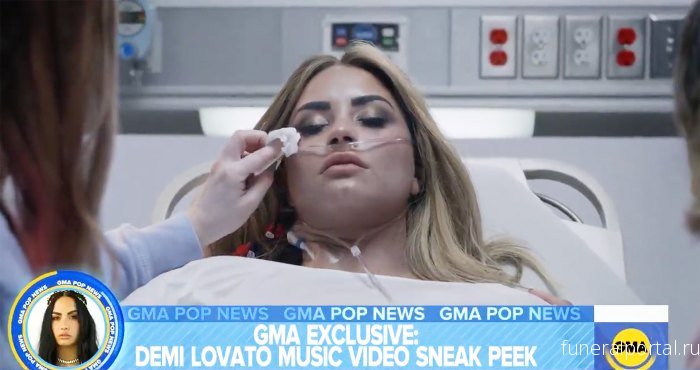 Demi Lovato has been open about her 2018 near-fatal overdose in her new YouTube documentary Demi Lovato: Dancing with the Devil.

And on Thursday, the former Disney child star released the music video for her song - that has the same name as the factual film - and in harrowingly honest scenes she recreates several details from the night she almost died.

In the music video - which lasts over five minutes - the hitmaker, 28, can be seen in a hospital bed and hooked up to a dialysis machine from a neckline.

The star - who has mascara wiped down her face - also has a ventilator attached over her mouth and nose in parts of the video.

As the clip continues with Demi lip-syncing the candid lyrics about having "a little red wine" which escalates to a "little white line" then a "little glass pipe" she can be seen continuing to recreate the evening when things turned bad.

She knocks back booze whilst dressed in the exact ensemble she wore on the night of July 23 2018 and sports a blonde ombre wig that resembles her hairstyle at the time.

Demi is then seen hazy as she rides in the back of a taxi with pals before later saying bye to her friends and texting her drug dealer - which are the exact details she shared in her documentary about the hours prior to her overdose.

The Sorry Not Sorry musician then can be seen sitting on her bed when a man - her drug dealer - hands her a bag - presumed to be filled with drugs - which she unzips.

She is next shown passed out in bed with the man - who Demi alleges raped her that night - leaving her for dead and skulking out - other details that were shared in the YouTube film.

In the Dancing With The Devil music video she can be seen in hospital fighting for her life (Image: Youtube)

Doctors tend to the star after she nearly died in July 2018 (Image: Youtube)

The next harrowing scene shows Demi's assistant trying to wake up Demi before an emergency medical crew arrived.

More scenes from the hospital are shown where she is surrounded by friends and family whilst Doctors try to save her life.

The video begins with a trigger warning that reads: "This video contains content depicting addiction, drug use, trauma and sexual abuse which may be triggering for some."

As the footage wraps several helpline numbers and details are shared on screen for anyone who needs support.

Songstress Demi had been sober for six years when she relapsed and went onto even harder drugs that almost claimed her life.

In other parts of the footage, she can be seen knocking back booze - like she did on the night of her overdose (Image: Youtube)

The singer wears the same outfit and hair style she had at the time (Image: Youtube)

She then returned to rehab for a number of weeks until she felt well enough to head back into the real world.

The global music sensation has been on a programme of recovery and has made quite a turnaround in the last two years for the better.

Demi's documentary - which was released on YouTube on March 23 - looks at her rise to fame as a child to her battles with mental health and sobriety.

During the candid film, Demi says that the overdose led to her suffering three strokes, a heart attack and her brain was damaged so much that she couldn't see when she first came around.

The Barney star still has blind spots in her vision and can no longer drive.

She had been her pal Dani's birthday and her friends and family were hanging out to celebrate.

Some of the group headed back to Demi's house at around 12.30 am and they danced together on the roof.

When Dani got tired and said she was going home, Demi begged her to stay over, but Dani said she had to go home and would call her in the morning so they could go hiking together.


Demi confessed: "I said I was going to bed but the reality was I had called my dealer over. What people don't realise about that night for me was that I wasn't, I didn't just overdose, I also was taken advantage of."

She added: "I've had my fair share of sexual trauma throughout childhood, teenage years, and when they found me I was naked, I was blue, I was literally left for dead after he took advantage of me."

News had broken around the world before her mother, sisters and best friends even knew what had happened to her.

After getting to the hospital, her loved ones were told that the next 24 hours were critical and that Demi might not make it.

*Demi Lovato: Dancing with the Devil is available on YouTube

Frank offers confidential advice about drugs and addiction (email frank@talktofrank.com, message 82111 or call 0300 123 6600) or the NHS has information about getting help.