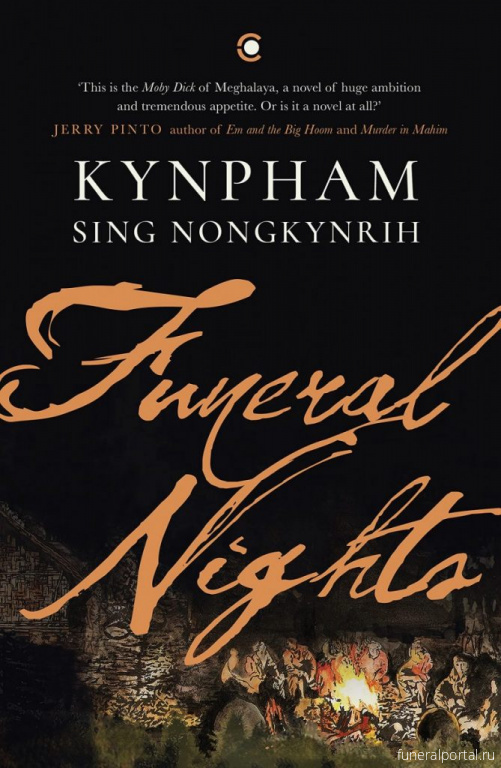 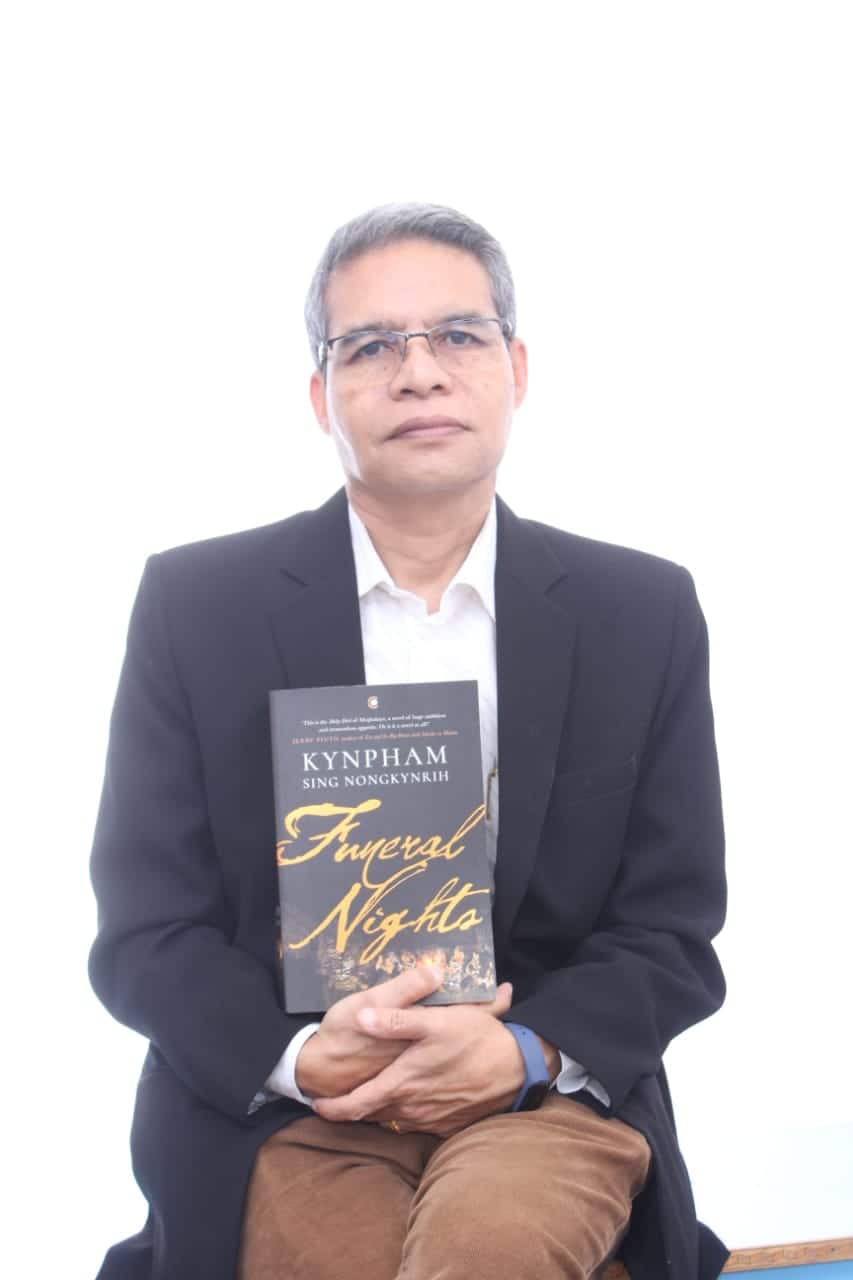 Nongkynrih gives non-Khasis an extraordinary introduction to a people and culture that little is known about.


In his debut fiction novel Funeral Nights, author and poet Kynpham Sing Nongkynrih writes about the many names that Khasis have for the rain – “…not merely synonyms, but referring to various kinds of rain: slap (rain), lapbah (heavy rain), lapsan (immense rain), lap-theh-ktang (pouring rain, or literally, pouring-from-the-bamboo-tube rain), lap-khyndai-miet (nine-night rain), lapphria (hail), lap-eriong (dark-wind rain, or a black storm), lapiwtung (smelly rain, because it continues for many days, causing clothes to stink), lap-boi-ksi (louse-swarming rain, because it looks like lice when it settles on hair and clothes), laplynnong (rain confined to certain locales), lapkynriang (slanting rain), and lap-bam-briew (human-devouring-rain, because it does not stop until some human has fallen to some rain-triggered disaster)...”

In the week preceding my interview with Nongkynrih in Shillong, we’ve had every single kind of rain he’s mentioned and then some. On the day we are to meet at Pinewood Hotel, one of the oldest and prettiest hotels in the city, there is a thunderstorm warning but the sun is out. “That’s Shillong weather for you. You never know what you are going to get,” says the 57-year-old English literature professor of North-Eastern Hill University as we sit down to talk about Funeral Nights, that Jerry Pinto has described as the ‘Moby Dick of Meghalaya’.

On the surface, the book follows a group of friends made up of middle-aged writers and academics from Shillong who travel to a remote location in West Khasi Hills to witness Phor Sorat (feast of the dead), a unique six-day-long funeral ceremony of the Lyngngams, one of the seven Khasi sub-tribes. The group though, ends up reaching Nongshyrkon, a secluded village, a week early. As the book’s blurb reveals, ‘stuck in the jungle for eleven days, they spend their nights around a fire in the middle of a spacious hut built especially for them, sharing stories and debating issues’. Following the narrative framework inspired by Boccaccio’s The Decameron and The Arabian Nights, Nongkynrih weaves in stories, legends and conversations about more pressing matters of climate change, identity and corruption to give us non-Khasis an extraordinary introduction to a people and culture that little is known about. Much like the weather of Shillong, there is no predicting the course of this 1009-page dizzying novel that blends fiction with non-fiction, that’s partly a memoir, a travelogue and a collection of stories and anecdotes in prose and poetry.

And, it all started at the inaugural edition of the Kovalam Literary Festival in 2008. “I was reading some of the poems and after the session a lady approached me and said ‘I must publish your poems’. She introduced herself as VK Karthika, who at the time was the CEO of Harper Collins. I was floored because while I had been published in journals and magazines both in India and abroad, I had never been approached by a publisher,” he remembers. Among the poems Nongkynrih had read at the session was ‘Blasphemous Lines for Mother" (Ki Kyntien Bym Ïaroh Na ka Bynta I Mei) that had a line ‘those days in Cherra’ referencing Sohra or Cherrapunjee where he was born and spent a significant part of his childhood. “Karthika was intrigued by ‘those days in Cherra’ and suggested that I write a memoir. Instead I promised her a book that would challenge genres; something big and bad.”

Over the next decade, he continued to write poems, short stories and plays in English and Khasi while teaching poetry and classical criticism to his students. But the father of three had also begun to do deep research on everything about the Khasis. “Khasis as a whole, me included before I wrote this book, are very confused about their own culture. We hardly know anything. Many of us can't even speak the language well and we increasingly speak a language that is known as Khalish - Khasi mixed freely with English. We also know next to nothing about our culture and history, our myths and legends which are the sources of our history. We also know nothing about the aspects of the culture we are practising today. For example, take the Khasi democracy we see in the Dorbars (village councils) and the matrilineal system – we still practise them but without proper knowledge.” Nongkynrih describes the research process as ‘discovering the soul of my people’.

As he learnt about Khasi spiritual and sociological roots, political, social and economic systems, the matrilineal system, monoliths and sacred groves, he knew that he didn’t want to write non-fiction. “I didn’t want it to be an exposition because that can be quite tedious for readers. I decided to mix in all the stories I have heard from my childhood onwards and the stories that I have told over the years.” Using stories and dialogue to tackle serious issues like militancy or the ‘outsider vs tribal’ issue ensures that the book doesn’t take sides. “I took the inspiration to do this from the Socratic dialogues of Plato. Having multiple people talking about an issue means that all viewpoints are represented.”

Much like Nobel Prize-winning author Gao Xingjian’s Soul Mountain, Funeral Nights has a variety of writing styles that are dictated by the change in themes. “The first chapter is largely lyrical while elsewhere there is conversation and boisterous humour and when I was writing about religious philosophy, the language is theological and symbolist.” Nongkynrih finally started writing Funeral Nights only in 2016. “I had to take a sabbatical from work because it was impossible to do both. For over a year, I wrote for 14-15 hours every single day.” The book’s first draft stood at 1600 pages that took another few years to whittle down. “I knew even then that this book is a once-in-a-lifetime thing. I don’t think I’ll ever write anything like this again.”

While he waited for Funeral Nights to hit bookstands, Nongkynrih used last year’s pandemic-triggered lockdown to write Nameri: A Verse Romance, a single poem that contains 208 short poems. “It’s an exploration of spiritual love; I was partly inspired by Dante’s love for Beatrice. It was all written over a span of five months.” He has also started working on a historical novel. “It relates to the history of an ancient Khasi state ruled by women, which is strange because kings amongst the Khasis are usually men.”

As we end our conversation and step out of Pinewood, the clear blue sky of an hour ago has been overshadowed by dark clouds and there is thunder in the distance. In a trice, the skies open up as they often do in Shillong, without any warning. I tuck my signed copy of Funeral Nights under my arm, open my umbrella and step into a downpour that I’m uncertain about – would Nongkynrih have called this one lapbah or lapsan? I’ll get the hang of it someday maybe.

Set in Meghalaya, ‘Funeral Nights’ is an ambitious, unconventional novel about the Khasi people
https://scroll.in/article/1002439/funeral-nights-set-in-meghalaya-this-is-a-vastly-ambitious-novel-a...

Book Review: Kynpham’s 'Funeral Nights' Is an Unconventional Novel About the Khasis
https://thewire.in/books/book-review-kynphams-funeral-nights-is-an-unconventional-novel-about-the-kh...